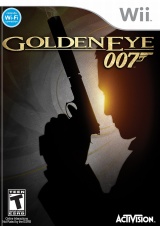 In 1997 GoldenEye 007 came out for the Nintendo 64 and forever changed the way First Person Shooters were viewed on home game systems. Now, 13 years later, GoldenEye has been remade for the Nintendo Wii. The story basically follows the James Bond film of the same name, with the exception of where Pierce Brosnan played Bond in the film and was portrayed as Bond in the N64 game, Daniel Craig now plays Bond in the Wii remake.

The story is your typical James Bond scenario. Stop the bad guy from causing lots of mayhem and destruction and in the end get the girl. The story is not what you will be giving much thought too, however, as you play through this game. Each level consists of getting from point A to point B while completing certain objectives while killing lots of bad guys in the process with a variety of different types of guns. Also, in one level you get to drive a tank and blow lots of stuff up.

GoldenEye 007 is played from a first person perspective. Each level involves killing waves of enemy soldiers. When an enemy is shot, there will sometimes be a small splash of blood, so small that many times I did not even notice it. Enemies will also quickly disappear shortly after being killed.

When Bond (the player) is shot, the sides of the screen start to turn blood red, the darker the red, the more serious the injury. If Bond is killed, blood flows down from the top of the screen to indicate you have been killed.

Very little bad language is used in this game. I heard the words hell and damn each used a small number of times. The ESRB also lists the word “ass” as used, although it must have flown by me because I did not take note of it.

Also, there are not any chat options in multiplayer, so parents do not need to worry about their kids hearing other players use bad language.

In James Bond fashion, the opening credits of the game show the silhouettes of women. They are very curvaceous.

One of the levels takes place in a nightclub. There is a scene where Bond enters a man’s office and there is a woman sitting on his lap giving him a kiss.

Some of the women are dressed to show some leg and a little bit of cleavage.

Bond kisses a woman at the end of the game. They are both standing up and fully clothed.

There is not any spiritual content in this game.

I am not a big fan of James Bond. I have never watched the film GoldenEye and I have only played through a couple levels of the N64 version of GoldenEye, so I really did not have any high expectations for this game. Yet I was pleasantly surprised at how much I actually enjoyed GoldenEye for the Wii. Parents should be aware, however, that GoldenEye 007 for the Wii is not all that different from a game like Call of Duty with the exception that there is a lot less blood and gore, and a lot less bad language allowing the game to earn a T rating. Like Call of Duty, however, the object of the game is to get through each level killing multiple bad guys. My advice to parents is that if you are looking for a game like Call of Duty, but with less blood and bad language, then Goldeneye 007 may be a good game for your family. If, however, you are not a fan of violent games in your home, then you will probably want to pass on this one.