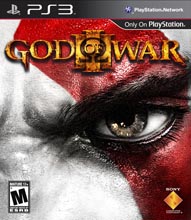 In the original game God of War, you play as Kratos; a Spartan General deceived by Ares the God of War into killing your own wife and child. As Kratos, you go on a quest to find and seek revenge upon Ares. Kratos does kill Ares making Kratos the new God of War. In God of War 2, Kratos is cast off of Mt Olympus and made mortal again by Zeus because of the havoc he has been wreaking around the world. Kratos then seeks out Zeus for the remainder of the game in order to gain retribution. At the end of God of War 2, Zeus does not die. Instead it leaves off with Kratos climbing Mt Olympus on the back of a titan, waiting to show Zeus HIS maker, thus leading to the opening of God of War 3.

Kratos begins the game with all the skills and weapons he possessed in the second game as he leads up to fight against Poseidon, god of the oceans. With his blades flying through the air, Kratos eventually slices Poseidon’s head off, but not before completely gutting a centaur and watching his insides spill onto the battlefield. This is all done in gratuitous detail, more so than any other game I have ever played. Adding to the detail, the more people Kratos kills, the more soaked in blood he becomes. After a battle, you will literally be able to see the blood drip off of Kratos’s body.

After killing Poseidon, Zeus casts Kratos into Hades where he falls into the River Stix and loses all the skills he had from the previous game. With the help of Athena, however, Kratos regains a weapon, and then by killing enemies Kratos gains experience. Using this experience the player can upgrade Kratos’s weapons and the skills that come with them. The more experience Kratos gains, the more equipped he will be to encounter Zeus.

Beyond the regular story mode, there are also challenges. For example, one challenge has the player attempt to kill all of the enemies in the challenge without using a weapon. Another challenge has the player trying to stay alive without doing any damage. By completing challenges, players can unlock items to be used during normal game play such as costumes that give Kratos extra power/defense, or little trinkets that give Kratos special abilities such as the Goblet of Athena that lets Kratos take zero damage.

Oh the violence! I cannot remember 2 minutes of this game passing where I did not have to kill something. I even got to hop on top of a Cyclops, jab my sword through its eye, and use him to kill others. I ripped harpies in half, broke the necks of minotaur’s, tore the legs off of Hermes, decapitated Helios, ripped open a centaur and beat demi-gods to death with my bare hands. Violence is the thing this game knows more than any….and like I mentioned in the game description, the more Kratos kills, the more soaked in blood he becomes.

Outside of using the word damn and hell, and usually in terms of someone’s soul being damned, I only ever heard the word b*tch being used. There was surprisingly not a lot of foul language in the main game. There are, however, unlockable “Behind the Scenes” extras that do contain bad language such as F**k and S**t.

There is a scene in the game involving the goddess Aphrodite. Kratos walks in on her with two other women, all topless. The two women get up and Aphrodite propositions Kratos. The player can choose not to do anything; however, the player can also choose to accept her proposition and have sex with her. If this choice is made, the scene cuts to the two women as they watch you make love. While watching, the two women will also caress. All though the scene does not show Kratos and Aphrodite in the act, you can hear them. The player must then press buttons in a certain sequence to improve Kratos’ performance. If Kratos does well enough, he will be rewarded with a prize. The scene ends with the two girls falling over each other onto the floor and Aphrodite praising Kratos’ “abilities.”

This game is about killing Greek gods. It is all centered on Greek Mythology and offers no other alternative. It shows an example of heaven and hell in Mt Olympus and Hades, and tells the story about how Zeus and his brothers had to defeat their father Cronos to become the Kings of Olympus. It talks about damning people and casting them to the pits of Hell/Hades as well as referring to hope and the “light.”

I have always been a fan of the God of War series; and as a fan I was very satisfied with how God of War 3 ended the trilogy. Parents should keep in mind, however, that God of War 3 is full of lots of violence and blood (and lots might be an understatement), that and the scene with Aphrodite makes God of War 3 a game that I would most certainly not recommend for children or teens.