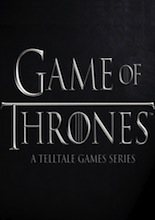 George R. R. Martin’s series of fantasy novels, collectively called “A Song of Ice and Fire,” have always been a well-loved series among aficionados of the genre. But with HBO’s adaptation of the series to television, taking the first book’s title, “A Game of Thrones,” has propelled the series into an icon of pop culture.

The series focuses on the political power struggles of the seven kingdoms, and generally features a variety of people just trying to get ahead. The story forms a complex string of alliances, betrayals, and personal goals as everyone struggles to attain the iron throne, or even just to not get trampled by those who seek it. It’s a truly compelling tale, with many characters to love and many characters to hate.

In any case, HBO recently called upon Telltale Games, known most recently for their potentially life-changing Walking Dead video games, to make a game set in the Game of Thrones universe. Which was the absolute perfect choice of developer to tackle such a story, as their history in creating interesting stories with difficult moral dilemmas is well established.

Game of Thrones jumps right into the story and follows House Forrester, a noble house that supports the Starks of Winterfell. And the game begins the night of the Red Wedding (I won’t give spoilers, but just know that this is not a good time to be a supporter of the Starks). In the wake of that event, the player takes the roles of various characters related to House Forrester as their political enemies begin closing in.

The HBO series has been a subject of controversy among Christians due to the amount of sexual content the series includes. It often uses sex as important parts of the story, and while some would argue this is a legitimate thing for such a story to do, others argue that watching something with such graphic depictions of sex are simply outside of appropriate Christian behavior. So let’s see how this game is faring so far.

NOTE: This game series is ongoing, so this review covers episodes 1 and 2. Other episodes will be released once every couple months, and new reviews will be posted as they do.

Game of Thrones doesn’t try to mask the violent nature of its tale. The gameplay is not action-oriented at all, but when violence does ensue, the result includes a good deal of violent imagery. Men are stabbed, beheaded, and cut deep. One scene includes dropping maggots into an open wound to deal with infection. When someone is stabbed, spurts of blood are seen, and some dying characters are coughing good amounts of blood.

Does it count as violent content if a game makes you want to brutally murder one of the characters? I mean the books and show already do this, because some people in this series are indescribably evil, but… ugh. You’ll know what I’m talking about by the end of episode 1, so be forewarned; you will hate some fictional characters in this game. You will hate them a lot.

The player should be prepared to hear all manner of language. Words like “f**k” and “s**t” are used fairly regularly (though not constantly), and all lesser profanities make occasional appearances. Mostly by people.

Surprisingly enough… nothing. Heck, the rating for episode 2 mentions “sexual themes,” but I’m not even sure what it was referring to. In any case, so far there’s none of the nudity and sexual content the show employs. That said, sexual politics are a pretty major theme of the series, so I can only assume somewhere in the game’s six planned episodes will be at least one instance of nudity. But not yet.

Game of Thrones is a fantasy series… but just barely. The focus is the politics and the characters, and fantasy elements rarely make an appearance. In the case of this game, they just don’t. At all. So no worries here.

There are a lot of challenging moral dilemmas, intended to make the player think about their morality rather than encourage them to do right or wrong. As a result, the player can be fairly brutal and manipulative, or understanding and kind.

I said Telltale was the perfect choice for making a Game of Thrones game, and this has proven me even more right than I thought I would be. Their ability to set up moral dilemmas with compelling characters is in full force in this series, and thus far it’s on track to challenge The Walking Dead for the spot of “Most Thought-Provoking Video Game Ever Made.”

Also, episode 1 ends on possibly one of the greatest narrative fake-outs since the opening hours of Assassin’s Creed 3. Won’t say how, because spoilers, but man it’s impressive. And infuriating. And amazing.

When it comes down to it, you likely already know whether you will be alright with this game or not. If you enjoy the show, or even just the books, you will love this game, and its ease of play ensures that even someone who’s never played games could easily experience this story. If you don’t think Game of Thrones is appropriate for a Christian, this game will likely not change your mind, though its surprising lack of sexual content so far could perhaps help.

Either way, it is not appropriate for children. At all. So, much like the other Telltale games I’ve reviewed on this site, I say approach this one with caution. Make sure you, or your teens, are mature enough to handle its content; and if the answer is yes, you have one heck of a good story ahead of you.