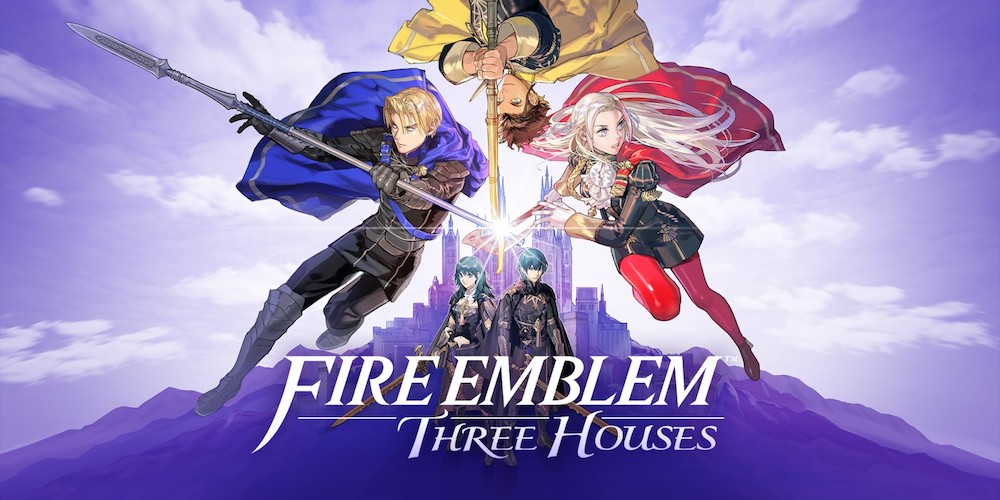 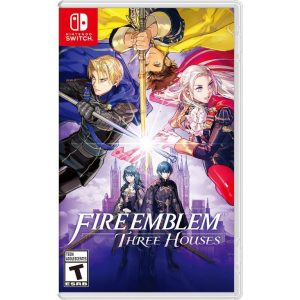 Game Description:
In the land of Fodlan, a mercenary is found after years of absence. He disappeared from the Garreg Mach Monastery years before, along with the child of his deceased wife, and now returns to the monastery with his young adult son or daughter (the player chooses their gender). Said young adult is now a skilled fighter, and is taken on as a professor at the monastery’s military academy, choosing one of three houses to teach. Each house has a unique cast of characters the player will be fostering and growing close to over the course of the game.

Fire Emblem is a long-running fantasy tactics series, and Three Houses is no exception. The core gameplay is of tactical battles; rather than control anyone directly, the player looks down on the battlefield from above and orders characters to move and take action. Each character is different, and has different abilities that the player helps foster by instructing them week by week, shaping their style of combat, strength, and abilities. So this isn’t about speed and precision, but strategy and tactical thinking.

But when the player isn’t fighting battles, they’re exploring Garreg Mach Monastery with all the other characters of the game. They have a limited amount of time to spend there, and choose what activities to spend it on. In doing so, they create bonds between all the characters that enhance their cooperation in battle and lead to scenes that show them becoming better friends, eventually culminating in possible romantic epilogues for characters that got close enough.

So basically it’s a midieval fantasy school simulator where the characters occasionally go out to fight bandits, soldiers, cultists, and monsters. It’s like chess but you spent half the game trying to make the pieces fall in love with each other. And if that sounds weird, it is! But also a whole ton of fun.

But let’s get into the game’s content before you go rushing out to buy this for your kid.

Violence:
The school at Garreg Mach trains students to be knights, officials, and soldiers, so there’s a big emphasis on combat prowess and training. When out in battle, characters fight with swords, axes, hammers, bows, and other midieval style weapons, as well as a variety of magical spells (which all look like one or another variety of sparkles, fire, or other similar effects). Ordering one unit to attack another displays a battle animation where the two characters duel, attacking each other 1 or more times with their weapon of choice. When anyone is killed, they cry out and fall to the ground bloodlessly. If it’s an important character, this may happen in slow motion.

Cutscenes include a couple instances of slightly more detailed violence, such as a man being impaled on a sword.

Language:
Mild profanity, such as “damn,” is used on occasion.

Sexual Content:
One of the characters in the game is a real ladies’ man, and flirts suggestively with all the women in the game. Similarly, one of the professors sees a lot of men, and complains to the player about her trouble with love on a regular basis.

Spirituality:
The world of Fodlan is one of fantasy, and so dragons, magic, and fictional gods are abundant. The story interacts with all of these, to varying degrees depending on which of the three houses the player chooses.

The Church of Seiros is a major player in the story regardless, though whether it’s portrayed positively or negatively depends on which route the player takes. There is little doubt that its theology are the truth of this fantasy world, however, as the game does confirm the reality of these beliefs through the story.

Positive Elements:
Three Houses is a story of our connections to each other, and how they sometimes break down over differences that simply can’t be reconciled. There’s a lot of tragedy in here, but all the drama is rooted in the same thing; our relationships and the people we connect with. Over the course of the game, we see characters become better people by challenging and loving each other, and we see people mourn the loss of people who turn against them. But through the causes that divide these characters we grow to love, we also see big, important issues. We see violence caused by prejudice, noble goals to open the nation to people in need, and people acting out of honor (to both good and evil ends). Three Houses doesn’t offer any easy solutions to its problems, but it portrays a great number of issues that are worth considering (and discussing with your child).

Reviewers Thoughts:
Fire Emblem: Three Houses left me with a lot of feelings, both good and bad. I love the cast of characters, I love watching them interact and pairing them up with each other, I love the pride I feel when one of them performs well in battle, I love the rush of knowing that a tactical mistake on my part could end in the death of a character I’ve been investing in the whole game.

It also has its drawbacks. Some major story beats feel rushed, and it becomes clear as the game progresses that the team didn’t have the time to really polish it up. The story can feel kind of scattershot, and makes the mistake of introducing a threat that’s bigger than the war that all the interesting drama comes from. And while I praised the story’s myriad of perspectives earlier, that also has the unfortunate side effect of the game failing to fully commit to any one belief or message.

What makes Three Houses worth playing–and I do absolutely think it’s worth playing–is the characters. There are few experiences out there quite like this one. The game has a huge cast of characters that you direct, watching them connect with each other, grow as friends (or even lovers), and fight together. The game is primarily about people, and the various ways we connect with others and benefit from our relationships with them, and it’s an absolute joy. It helps that the attached strategy game is excellent too, providing a lot of tense and strategically compelling battles for the player to navigate.

Fire Emblem: Three Houses is an imperfect game. It’s rushed, and it shows in a number of ways that took me out of the experience now and again, and negatively impacted the story it was trying to tell. But it’s also an extremely emotional story with a large cast of fantastic characters, and I seriously cannot stress how enjoyable and meaningful it is to pair them up with each other and watch them all grow close. It’s a uniquely poignant experience that’s worth the effort, even if the game as a whole isn’t quite what it could have been.

It’s also not necessarily for children, but it’s not particularly offensive either; mostly it’s just a bit advanced. Both the gameplay and the ideas presented by the story are pretty deep, but also presented fairly simply; it’ll get your child thinking critically and expose them to a variety of ideas worth considering. I’d say it’s worth a shot.