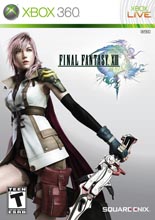 In the world of Cocoon, humans live in fear of the larger world below them, called Pulse. Both Cocoon and Pulse are governed by fal’cie, god-like creatures that are capable of branding humans as l’cie, forcing them to do their will. A l’cie is given a task, called a focus, and completing it means becoming a crystal and gaining eternal life. Failure, on the other hand, results in the l’cie becoming a fearsome monster, doomed to roam the world in regret for eternity. Though the Cocoon fal’cie provide things like food and power, the humans of Cocoon live in fear of Pulse fal’cie, as well as anyone unlucky enough to be branded a Pulse l’cie.

As a result, when a Pulse fal’cie is discovered in a coastal town, Cocoon initiates a purge: everyone in the town is gathered up and sent to be abandoned on Pulse. Lightning, a young woman in the Guardian Corps., willingly goes along to look for her sister Serah, who was branded as a l’cie by the discovered fal’cie. A man named Sazh follows for his own complicated reasons. Meanwhile, Serah’s fiancé Snow leads a rebel group to try and stop the purge. When civilians take up arms to help, a young boy named Hope sees his mother die in the conflict: he hatefully blames Snow despite encouragement from a young girl named Vanille. These entire characters end up confronting the fal’cie after Serah becomes crystal in front of their eyes: the fal’cie then brands them as l’cie, giving them an unclear focus. Now labeled enemies of everyone and everything they know, these six heroes set off to survive, discover their focus, and save Cocoon over the course of a 50+ hour sci-fi/fantasy epic.

Giving context to all this is a complex and emotional tale that is very focused on the inter-relational conflict between the characters. Hope’s vendetta against Snow provides some very intense moments, and Lightning’s down-to-earth nature clashes violently with Snow’s can-do attitude regarding their common loss of Serah. As their backstories are given over the course of the first 20 hours, each character reveals impressive depth, making for an intriguing character-driven story.

(Warning: This section of the review also contains Story Spoilers.)

FFXIII is played from a third person point of view. When a battle begins, the player controls one character and the computer controls one or two companions. The player enters a command for the character he is controlling, but the player can also assign job roles such as commando, medic and saboteur to his/her companions. These roles can be switched during combat by the flick of a button.

There is plenty of punching, slashing, shooting, and attacking with various magic attacks in the game. However, there is no blood and all enemies immediately fade away once killed. Characters will scream or squeal when hit with particularly powerful attacks. Large-scale battles in cut-scenes depict explosions, gunshots, and rampaging beasts (also bloodless).

The words a**, damn and hell are used at various points in the game.

One character’s l’cie brand is on her thigh, and another’s is on her chest: nudity is never seen, but a bit of cleavage in shown when the player sees these brands.

At one point, the female character Vanille climbs up onto a rock. Sazh, a man standing behind her, is surprised when he accidentally sees up her skirt; a baby chocobo flies comically in front of his face, blocking her from his (and the player’s) sight. This is used as comic relief rather than for sexual purposes.

There is also a scene where a girl transforms from a crystal back into a girl. She is nude after this transformation, but all of her girly parts are strategically covered. This scene only lasts a brief moment.

Some of the female clothing is a little skimpy, revealing high leg, mid-riff and/or cleavage.

The world of any Final Fantasy game is one of magic, mystical beasts, and intricate mythologies, and FFXIII is arguably one of the most fully-developed of them all. The fal-cie are god-like creatures, but bare more resemblance to the gods of Greek lore than the God of the Bible. They are immortal, but not unkillable, and in fact are not even responsible for the creation of Pulse and Cocoon. In short, the game has a lot of mythology to it and the world it takes place in.

In addition to learning spells to attack, buff and heal, players can also summon creatures called Eidolons. These creatures help the player to battle and deal damage to enemies.

Part of the story involves reference to a deity known simply as the “Maker.” The “Maker” is the one who created both humans and the fal’cie. It is said that the “Maker” then departed to leave the world to fall into ruin. The fal’cie believe that if enough humans are sacrificed (enough as in the entire population of Cocoon), then the “Maker” will return. It is not ever revealed if this will indeed bring the “Maker” back or if it is just legend. It also is not revealed if the “Maker” is in fact good or evil.

There are a few intense themes dealt with, such as the loss of a loved one, revenge, denial, and even suicide. The morals behind these themes are good, but they still may be a bit intense for younger players.

On a related note, these themes give way to some good lessons about responsibility, perseverance, forgiveness and reconciliation.

The Final Fantasy series is a highly respected series that includes some of the most loved video games of all time. So when a new entry in the series is released, expectations are enormously high. As a result, Final Fantasy XIII is possibly the most polarizing in the series. On one hand, it is a very well-crafted game, with a fantastic character-driven story, one of the best battle systems in the series’ long history, and a soundtrack that, while obviously not the superb work of series veteran Nobou Uematsu, is still very, very good. On the other hand, it simplifies or just does away with some of the long-running staples of the series with its linearity, lack of towns and less complex (though still strategic) battle system. Some people hate it for the changes it makes to the formula: some people love it for being a well-told story with great gameplay.

Regardless, Final Fantasy XIII is unquestionably the most visually beautiful entry in the series so far. Personally, I loved the game: the battle system is definitely my favorite of the series, the story is great, and the impressive graphics allow for better facial expression and character animation than ever before. I think it is a more than worthy entry in the series, and one of my new favorite games of this generation.