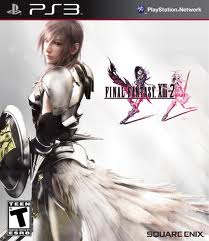 Before I get into the summary of this game, I should explain a few things about Final Fantasy for parents who are not familiar with the series. First of all, each Final Fantasy game is a story all of its own. Even though there are technically 14 different numbered Final Fantasy games, each one takes place in its own world, with its own set of characters, with a story that is unrelated to the others. In recent years a few of the Final Fantasy games have had either direct or indirect sequels to them. So when I say Final Fantasy XIII-2, this is actually just part two of the unique story that began with Final Fantasy XIII. To learn more about that story, check out our review here.

Final Fantasy XIII-2 takes place approximately 3 years after the conclusion of the first game. In it you play as two primary characters. First is Serah Farron, the younger sister of the first game’s hero, Lightning. Lightning has disappeared after the events of the first game and part of the primary story in XIII-2 is Serah trying to find her sister. To help her is a new character to the series Noel Kreiss, a mysterious time traveler from 700 years into the future who claims to also be the last human alive.

Honestly, the story can get a bit confusing, but here are the main things you need to know without giving away too many spoilers. Serah and Noel travel through time, one so that Serah can find her sister, and two, so that Noel can find a way to save the human race from dying out. Throughout this adventure they will encounter characters from the first game, battle and capture monsters, change the future as well as change the past, all in an attempt to hopefully set the timeline right, rescue Lightning, and save the human race.

Reviewer’s Note: There is lot of extra stuff in Final Fantasy XIII-2, so not everything in the game is covered in this review, but this review should give parents a good idea of the type of things to expect.

During battles, players will control Serah, Noel, and if they have captured any monsters, then they can also have a monster fight alongside them. Players will not control these characters directly so much as they enter commands for the characters to play out in battle through a turn based system. For example, you can command your characters to use swords for melee style battles, or you can command your character to use magical attacks such as fireballs or energy blasts. When an enemy is defeated, they simply disappear.

Not much of anything in terms of blood and gore, but the game does have many cut-scenes in which some acts of violence take place, such as the exchange of gunfire and one character that gets impaled on a sword.

Not a lot of bad language, but there is a little. The words damn, hell, ass, and bastard are all sprinkled into the game.

Some of the women, including the main character Serah, wear revealing outfits showing off cleavage, or low cut in the nether regions.

One character who the player will meet frequently is a woman who is part bird, part woman who wears a very revealing outfit. She sells you weapons and items.

Throughout the game there are many references to a goddess named Etro who is the goddess of death and chaos. To learn more about this character and the role she plays in Final Fantasy XIII and XIII-2, click here.

There is also a reference to a deity named Pulse, from which the land takes its name.

There is reference that the use of magic comes from the ability to draw upon the crystal power that resides within one’s self.

There is a reference to man’s spirit as being a gift from the goddess which is given to humans and humans alone.

Serah and Noel can learn magic abilities to use in battle, some for attacks, and some for protection and healing.

After winning a battle, Noel will sometimes say “The goddess must like us.”

There is a casino in the game where players can gamble by playing slot machines.

I thought Final Fantasy XIII-2 started off as a pretty decent fantasy game, but after about 17 hours in, I quickly grew bored. If you loved Final Fantasy XIII and if the above mentioned content does not bother you, then you will probably want to check XIII-2 out, but in my opinion, there are better fantasy games available to waste your time with.