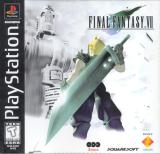 (WARNING: Review contains story spoilers)
Just as in movies like Casablanca and Star Wars, there are some games that withstand the test of time, games that are so well-made that, even years later, even through technological advancements and genre developments, they are still revered as one of the greatest works in the medium. Final Fantasy VII is one of those games. The series as a whole is well-known for its complex gameplay and long, engaging stories, and Final Fantasy VII is arguably one of the most well-loved games in the series. It originally debuted in 1997 as the first Final Fantasy game on the original Playstation. The impressive (for the time) graphics, 3D environments, and expanded story and world quickly made it a fan favorite. Despite the fan outcry to remake the game with modern technology, Square Enix has not yet delivered. However, the original game has been re-released on the Playstation Network so that anyone with a PS3 or PSP can download and play it for a mere $10.

The story begins with Cloud Strife, a mercenary who used to work as an elite SOLDIER for the Shinra Company. Shinra is a big company that controls the world’s power supply, using reactors to retrieve Mako, the life force of the planet, and use it as an energy source. Cloud, now a mercenary, is working with a group called AVALANCHE, a small resistance group that plans on destroying the Mako reactors to stop Shinra from destroying the planet. The leader of AVALANCHE is Barret, a tough man with a gun for an arm. Also involved is Tifa, a childhood friend of Cloud.

However, Shinra’s plans are not nearly so simple. Legend tells of a promised land, a land that Shinra believes to be full of Mako energy; however, the only people who know how to get there are the Cetra, also known as the Ancients. When Aeris, a young girl and the last surviving Ancient, gets mixed up with Cloud during a mission, AVALANCHE gets drawn up into a conflict involving not only Shinra, but another ex-SOLDIER named Sephiroth. Once revered as the top SOLDIER, the best of the best, Sephiroth went rogue when he discovered the details of the experimentation that had been done to him. Now with a vendetta against humanity (which is much more than a petty desire for revenge), his plans make Shinra’s threat against the planet pale in comparison.

This just sets up the story to what the player will encounter on this fantastic voyage. I must also say that Final Fantasy VII is one of my favorite games of all time. The purpose of this review, however, is to help you the parent, decide if it is a good fit for your family. The information below should help you decide if Final Fantasy VII is right for your family or not.

The game’s battles play out in a turn-based fashion: your party is on one side of the screen and your enemies are on the other. You carry out actions by selecting, from a menu, what each character will do. A bar fills up over the course of a few seconds for each member of your party, and when it is full they can take action. These actions range from attacking (with swords, guns, spears, fists, shurikens, or even a megaphone for one character), to magical attacks (ice, fire, poison, etc.) to using items and/or even running away from battle. When an enemy dies, they bloodlessly fade out of existence; when a party member dies, they fall to the ground and cannot be controlled until you revive them. There is no blood in battles.

Two of the characters in particular swear a lot, and often their dialogue involves a lot of symbols to cover up swear words (#&@!).

There is a scene where, in order to get some important information, one of the female characters goes to a don’s house to be considered as his woman of the night, hoping to get information out of him. When Cloud sees this, he and Aeris decide to go after her. To do this, Aeris decides to dress Cloud up like a girl so they can both go in. The following segment of the game is filled with references to homosexuality and some awkward situations, but never any blatant sexuality. Once in the don’s house, the three characters line up so he can choose: usually, one of the girls will be chosen, but if the player got the right clothes and such for Cloud, the don will choose him. This leads to an awkward scene with some sexual euphemisms, but the girls come in before anything actually happens and threaten to chop, crush, or rip off his genitals (with simple phrases like “If you don’t tell us… I’ll cut them off”) unless he gives them information. The whole event is played for laughs.

Like any Final Fantasy game, Final Fantasy VII has a fully-developed mythology to it. There is a force called the Lifestream that flows through the planet and connects all living things. When someone dies, they return to the lifestream. Magic is possible because of hardened material called Materia that forms from the Lifestream. It is much more complicated than that, but this is mostly the extent of the spiritual content of the game: anything and everything comes back to the lifestream.

Also worth mentioning are the summons: certain materia will allow the player to summon monsters from various mythologies such as Odin and Bahamut. These summons damage the enemy in a flashy cinematic, but play no other real part in the story other than to aid in combat.

Final Fantasy VII was the first RPG I ever played, so maybe I am a bit biased. But I only played it a few years ago, and despite how old it was at the time, it became my all-time favorite game. It has an incredible fantasy story to tell, and it tells it extremely well despite its dated technology. If the above content meets the acceptability of your families guidelines and if there are people in your home who like RPG games. then for $10 you can check out Final Fantasy VII on your PS3 or PSP system. (Note: If downloading to PSP, we recommend you to have at least 2GB of free space on your memory card.)