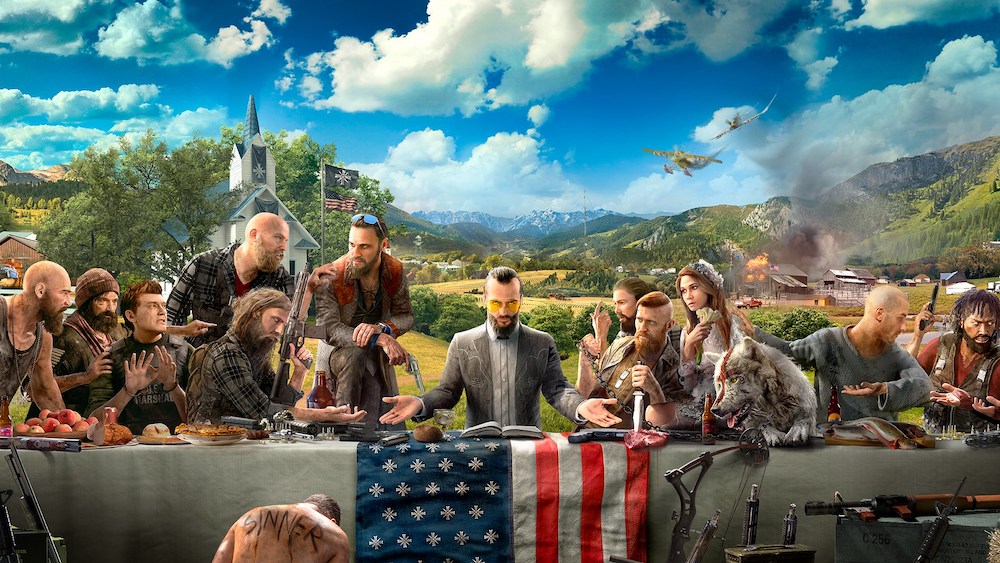 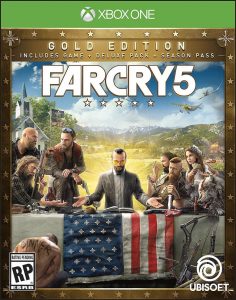 Game Description:
The Far Cry series has made a place for itself since its third game released in 2012. The series is known for its unhinged villains, freedom to approach conflict in a wide variety of ways, and a game structure so ubiquitous among Ubisoft games it’s literally called the “Ubisoft open world.”

Far Cry 5 takes these elements and brings them to an American setting for the first time, setting the game in a rural Montana county that’s been overrun by a cult called Eden’s Gate, led by a charismatic man named Joseph Seed. The game’s announcement triggered some controversy over the cult’s Christian affiliation and the American setting, as these elements pretty clearly tap into a lot of the political controversy that’s defining current American culture and discourse.

But those issues aside (don’t worry, we’ll get to them later), the game’s overall structure is familiar. Your character is stuck in Hope County, and becomes entangled in the rebellion against Eden’s Gate. The player fights back against the cultists, wandering the large, open area and taking on a variety of missions to wrest control from the cult and put a stop to the torture, murder, and drug-fueled mind control they’re inflicting on the residents of Hope County.

Between the violent nature of the gameplay and the controversial premise, it’s definitely worth considering whether you want your children playing this game. So let’s take a look.

Violence:
While there is a lot to do in the large, open world of Far Cry 5, the vast majority of it centers around violence in one way or another. The player will use a wide variety of weapons, from shovels to rifles to bows to grenades and more, to fight and kill the cultists of Eden’s Gate. Blood sprays from wounds and enemies cry out in pain when injured.

The player will come across bloody bodies hanging from crosses or strung up in the air. A man shoots himself in the head in one scene. Torture is implied and seen on multiple occasions. Some violent events are described verbally, such as the cult starving a family and then burning the parents in front of the children.

Language:
The game includes plenty of F-words, a couple instances of “c*nt,” and all manner of lesser profanity on a fairly regular basis.

Sexual Content:
There are a few sexual references in the dialogue, some explicit (such as a mention of a red light district full of women “selling their pu**ies”) and some more like double entendres (such as people complimenting your “pu**y” when they see your pet cougar).

Spirituality:
Eden’s Gate is definitely some kind of vaguely Christian cult, but for better or worse, the game fails to define its beliefs or exact doctrine very well. High-ranking members of the cult, especially Joseph himself, will often quote scripture, and regularly reference religious concepts like sin, faith, and spiritual redemption. But the defining element of the cult is its doomsday preparation; Joseph believes that the apocalypse is coming, and is trying to prepare people both physically and spiritually for the coming armageddon. Which apparently involves a militaristic takeover of Hope County and violent, forced conversion of its residents.

The game does sometimes include mystical elements, but they’re drug-induced hallucinations, not real events.

Miscellaneous:
Eden’s Gate uses hallucinogenic drugs to control some of its population, and the player will regularly come into contact with them in various contexts. There are also some drugs the player can craft out of collectable plants, which temporarily enhance speed, strength, or hunting abilities.

Reviewers Thoughts:
Far Cry 5 is a lot of fun to play. It’s also one of the most narratively frustrating games I’ve ever played.

A few tweaks to the typical Ubisoft open world formula make the player feel very connected to the world, while also shattering any sense of pacing in the story. Most of the missions and activities are well-designed and fun to play through, but they can occasionally feel like a bit of a slog because of how long it takes to reach the next major story beat. And most of all, the game seems to have taken its controversial imagery and subject matter and very intentionally done absolutely nothing with it.

Wherever you may stand on the issues facing America and the rest of the world today, there’s no denying there’s a lot to talk about. And a lot that’s important to talk about. Setting a Far Cry game in what appeared to be a nationalistic Christian cult in rural America is an incredibly controversial decision that stands to have a lot to gain if it does its commentary well, or a lot to lose if it doesn’t. So instead, Far Cry 5 constantly and conspicuously dodges every opportunity it has to say anything meaningful, even as it revels in nationalistic bravado and makes multiple veiled-but-blatant references to the controversies of Donald Trump.

I was hoping by the end it would have something interesting to say about Christianity, or America, or anything really, but it just never does. It uses controversial imagery and ideas to stir the pot, but so deftly dodges the issues it’s invoking that it ultimately feels incredibly hollow.

For some, that might be a selling point, especially if you’re concerned about the effect the game’s portrayal of Christianity (though I use the term incredibly loosely here) may have on your child. But frankly, if someone is old enough for the game’s violence, language, and drug content, they’re old enough to consider the complex issues the game pretends to bring up. Instead, it’s just a good time.