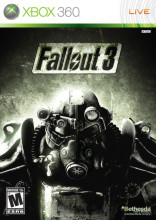 Fallout 3 is the story of a “vault dweller” after a nuclear war. A portion of the people in the USA, as you might imagine, were shuffled into vaults to protect them from the nuclear fallout that the game is named for. The game begins with your birth inside the vault and the story continues with you leaving the vault and going on to complete various tasks that will either make you a hero or a villain depending on how you decide to play the game. Fallout 3 allows you to explore what seems to be an endless and surreal wasteland making choices both in your dialog and your actions as you move through the games many quests.

There are a few different types of creatures you will encounter in the game. I will name some of those here:
Ghouls – Some of these are great people despite their gruesome appearance, others are crazy and will attack you on sight.
Super Mutants – These are huge muscle bound oafs. They have low intellect and a large arsenal.
Enclave – This is a group that is trying to restart the government, but they are very evil and power hungry at their core.
Slavers – One of the more despicable groups in the game.

Part of what makes Fallout 3 fun is the ability to choose your response to the people in the game. During a conversation you will get a dialog box that give you the ability to pick a multitude of things to say that in turn have a direct effect on your karma and the outcome of the conversation. In many cases a positive outcome will be the difference between completing a quest peacefully or with bloodshed. Karma is a big deal in the game. You receive and lose karma for every good and bad thing you do in the game. Your level of karma also has an effect on what is available to you moving forward. As you level up you have the ability to modify your character though the use of attributes, skills, and perks.

Warning Spoilers Ahead:The main quest is the quest to find your father who leaves the vault for unknown reasons just as soon as you are old enough to fend for yourself (19 years old). Your father is a scientist in the story and you find as you track him down that he has left for scientific pursuits that are utilitarian in nature. The end of the game comes as soon as you complete the main quest to find your father. Your father has been working on a project to create clean radiation free water for all, and the Enclave swoops in to try and take the project from him. You become the ultimate hero by destroying the enclave and giving your life to complete your fathers work.

Fallout 3 is played from the 1st and 3rd person views and the violence in the game is extreme. The most violent scenes are often in slow motion due to a feature of the game that slows down combat in order to allow you to take an aimed shot. Since you are able to do just about whatever you want in the game, to an extent you control the violence. Someone that took it upon themselves to be the worst type of human possible could see some of the most gory and reprehensible acts, while someone that decided to be as non violent as possible would see the very least only more justifiable deaths. Perks also play a role in this and allow the game to become even more violent and gory if you so choose. A certain amount of violence is absolutely unavoidable. Often animals or people are literally gutted with automatic weapon fire. There will be many times where you will kill someone by blowing there head off with various weapons. The realistic graphics in the game give you the ability to see some of the more gory scenes in detail.

In general I would characterize the language as crude. The word f**k is used several times in many different ways. Other words like hell or damn are used liberally as well. I will point out that sometimes you have the choice whether or not to make your character say those words in conversation.

In many cases the mention of sex is in relation to prostitution and you will encounter more than one prostitute that propositions you. There are never any actual sex scenes. There is at least one instance of polygamy. You are able to view anyone in the game in their underwear by killing them and taking their clothes.

– There is a group of spiritual zealots in Fallout, they have an odd belief in a bomb that you later defuse (if you do the quest) to their dismay.- There is also reference to the Bible verse Revelation 21:6 which your father tells you in the beginning of the game was your mother’s favorite verse.- Also in the beginning of the game there is a flyer on a bulletin board advertising Tarot Card readings.

The game is very realistic in its portrayal of a post nuclear war environment. You will run into some very bad people in the game and some very bad situations. Some of which you can do nothing about, and some of which you have to go along with, a least for a time. An abusive single mother who is an alcoholic, slavers, and a man that keeps about a dozen people trapped in a cryogenic state while he fools with their minds via virtual reality are just some examples.

Fallout 3 is rated Mature which means 17+. I would concur that Fallout 3 is for adults only. I thoroughly enjoyed the game with its immersive storytelling, interesting plot lines, and quests. There are many things that are meant to be funny and the writing in the game is actually very good. The violence in the game makes sense within the context of a virtual wasteland where it is every man for himself in most cases. Overall I did not find any of the violence or quests to be disturbing to the point that I would mention them individually as things to avoid in the game, but I would recommend that Fallout 3 be for older (17+) audiences only.