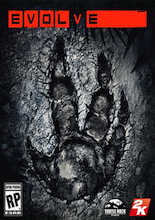 Game Description:
Evolve is a unique game which pits a monster against four humans. Evolve involves strategy, planning, coordinating with a team, and a lot of action. Players who play as a monster must survive being hunted by the humans, until they grow strong enough to go on the offensive. Humans must hunt down the monster and slay it. The hunters have four unique classes (with each character within that class providing unique gameplay). There is the Assault class, which deals damage, the Medic, who heals, the Support, who gives other bonuses to teammates, and the Tracker, who hunts down the monster.

Evolve’s story starts off with all the hunters gathered in one room, with one of the hunters explaining that they are at the planet to help evacuate colonists. The monsters have grown to be very dangerous, and only the hunters are skilled enough to take them down. That is about where the story ends, because after that, all narrative is delivered as the player plays the game (there are no story missions), and listens to the dialogue. The dialogue never really provides a story, it just gives some background information on each of the characters, or they talk about the world they live on. The narrative dialogue is very infrequent.

Evolve switches from first person to third person perspective depending on what role you play. Monsters are playing in the third person, and humans from the first. Evolve’s art design is realistic. There is a lot of blood and gore in Evolve. Pretty much anytime the monster is shot, or the hunters are hit, blood with erupt from them. The goriest thing is when a Goliath (monster type) dies, it will vomit blood for a few seconds, before keeling over.

The hunters have access to a large arsenal of weapons – including all types of rifles, grenades (including poison), lasers, and other explosives. There are also some unique weapons, like harpoons, which skewer into the monster in order to hold it in place. Hunters will often kill animals native to the alien planet. Some of them will be aggressive against the player, some of them give bonuses to the hunters, and some of them the hunters will just shoot (out of fear, or perhaps to gain an advantage over the monster).

The monsters have a variety of abilities. Some have fire attacks, some have electrical attacks, there is a boulder attack, and there are charge attacks. All monsters have a claw or blade attack of some sort. Besides trying to kill the humans, monsters also need to hunt down and feed on native animals in order to “evolve.”

The reason both sides are killing each other is actually pretty reasonable. The monsters are fighting back against invading humans, and the humans are trying to evacuate the planet, as it is too dangerous to live on. Regardless of motive, there is still a “hunting,” aspect of the game.

At first, I thought that Evolve was profanity free. Because of the structure of the game, the player only hears certain audio clips at very specific times when playing. After about three hours of play, I discovered that there was indeed profanity, and a lot of it. Specifically from three characters, who use f**k and s**t regularly. The rest of the characters have pretty clean mouths, but may say a** or d**n from time to time.

I would like to point out that despite its name, Evolve actually contains no evolution. The process the monsters undergo to level up is just growth (similar to how Pokémon uses the term “evolve” to mean grow), or maybe mutation.

A Child’s Perspective: Evolve is not the most kid friendly, so I did not play this with anyone under 16.

Evolve is really fun. The gameplay is balanced, and the hunting/being hunted dynamic is very fun. Each of the characters are fun to play with, and provide unique gameplay. The monsters feel really powerful, and are equally fun to play as. Playing against a human controlled monster, while working with three other human teammates is very rewarding if you win. Honestly, Evolve has some of the best teamwork gameplay I have ever experience.

Evolve does have its fair share of flaws though. Back in 2014, a lot of people complained about Titanfall, and its lack of content (even though it was the same price as other games). I have that same problem with Evolve. Evolve has less story than Titanfall ever did. On top of that, Evolve gets repetitive quicker than Titanfall, as Evolve only has about 5 game types, and roughly 8 maps (which don’t play very different). The game is fun, but I think that those who get it at full price are being ripped off.

Another thing I don’t like about Evolve is its business model. In the gaming world, you can break down how people buy games into two main categories: full games, which give you almost all content (though some extra content may be added later, for a price), and free to play games, which make money off of small transactions. Free to play games are great, because you essentially pay what you want for them. If you want to support the game creators, or you want to show off your status, you can buy things like unique “skins” (graphical changes, without effecting gameplay). Unfortunately, Evolve suffers the sin of trying to combine these models. It charges full price for a game that comes with less content than most, and then tries to sell all of the content that should come with the game. In a game like Call of Duty, you would have a gun, and then you would be able to unlock different camouflage options for it. If you want your gun to look different in Evolve, it is going to cost you $1.99. For each gun. In fact, Evolve comes with over $100 of content to buy. Content that comes with every other game of this type. If you thought you could buy a season pass for the content, you would be wrong. An Evolve season pass is the same as a normal DLC (downloadable content) pack in any other game, but comes with less content. Right now, the two season passes that are supposed to come out, are a hunter pack, which include four new hunters, and a monster pack, which include a new monster. Any which way you look at it, Evolve is not worth the full retail price, and its model is geared towards getting as much money as it can from its players.

In summary: Evolve is fun to play, but I would never, ever buy it. If I played it for more than a few weeks, I would probably put it down and forget about it for a long time. Then again, I have a friend who is currently the 33rd best monster in the world, and he has been playing Evolve in all his free time for the past month. I recommend this game for those at least 14 and up.