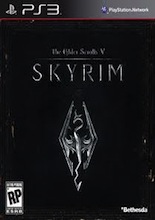 It has been about 5 and half years since the last Elder Scrolls game, Oblivion, came out, so there has been much anticipation for the newest entry in the series, Skyrim. Skyrim takes place about 200 years after the events of Oblivion and while it still takes place in the Imperial Kingdom of Tamriel, the setting takes place in one of the provinces to the north called Skyrim, a land full of forests, mountains, and snow that feels very much like the setting of the Lord of the Rings.

The game begins with you, the player, riding on the back of a wagon. You, along with some other criminals are on your way to be executed. Once you arrive to your place of execution, you witness one criminal get beheaded and then just as it is your turn to lose your head, something very unexpected happens; a dragon shows up and decides to lay waste to the town. In the midst of the confusion, you are able to escape and thus the adventure begins.

The main story in Skyrim involves discovering why the dragons have returned. Also, there is a civil war going on between the Imperial Kingdom and a group of people that want to see the land of Skyrim liberated. In addition, you will find out that you are a Dragonborn, a line of people who can speak the language of the dragons and who have the ability to absorb a dragon’s soul after it has been defeated which allows you to learn powers called dragonshouts.

Now one of the things that make an Elder Scrolls games like Skyrim so popular with gamers is that there is so much to do. The world is wide open at your disposal. You can follow the main story in the game, or you can just explore the vast wilderness and see what happens. You can also join groups like The Companions (a fighter’s guild), the Dark Brotherhood (assassins), the College of Winterhold (mages), or the Thieves’ Guild, all of which have their own storyline to follow.

Skyrim can be played from a first person or third person point of view. The player can use weapons such as swords, axes, maces, or bow and arrows. The player can also use destructive magic such as the ability to shoot out fire or electricity from their hands to attack enemies.

Enemies include animals such as bears or wolves, monsters such as trolls and giants, as well as other humans or humanoid type characters. When an enemy is hit with a blunt weapon such as a sword, blood will usually splatter on the environment and on your weapon. The player can also gain an ability in the game that allows him to decapitate enemies from time to time.

Every once in a while, while killing an enemy, the action slows down and the camera view turns to a third person view to give you a good view of your kill.

Dead bodies do not always disappear. Also, some locations will have dead bodies lying about when you arrive.

There are a couple of places where you will witness an execution by beheading.

One story line available in the game has you join the Dark Brotherhood. If you join this group, you will be assigned to assassinate certain people without always knowing why. One mission involved killing an old woman who ran an orphanage. She was a very mean old lady and all the children were glad when they found out she was dead.

I personally did not encounter a lot of bad language in the 30 hours I have spent playing the game. In fact, the ESRB does not list language as a factor at all in the M rating. I did encounter a few minor swear words though.

When you loot a dead body, if you take the person’s armor or clothing, you will see them lying in their undergarments.

In certain parts of the game you will encounter characters whose dialog contain sexual references to things such as whores, and rape.

In one area of the game, there is some hot springs where people were relaxing and bathing in their undergarments.

The Elder Scrolls games have a rich mythology to them, very similar to Greek mythology in that there are various gods and goddesses. I would recommend reading the Elder Scrolls Wiki (link provided in Game Summary section) if you are interested in learning more specific details.

You can drink alcohol and participate in a drinking game.

There is a lot to do in the land of Skyrim, so much so that if I did everything, you probably would not see this review for another few months (and that is not going to help you make a decision as Christmas is approaching). Hopefully I have been able to provide you with some information so you can decide if Skyrim is a good fit for your family or not. In the meantime, I do plan to keep playing Skyrim for a while and if I encounter more things that parents might want to be aware of, I will do my best to provide an updated version of this review down the road.