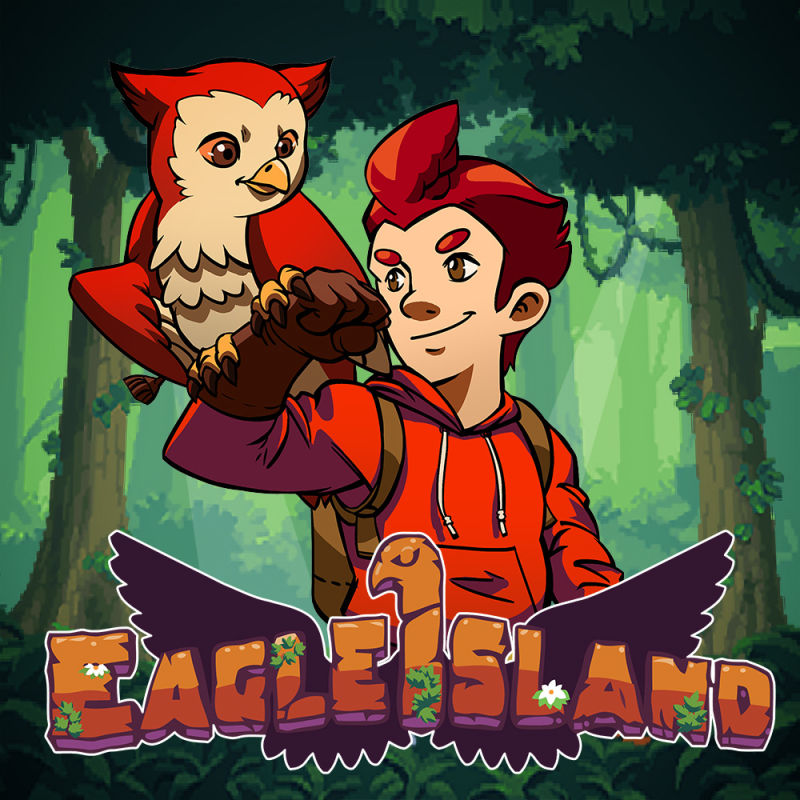 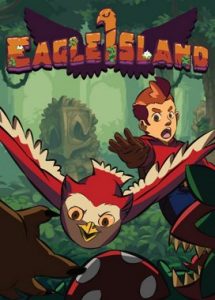 Game Description:
If you’ve read any of my past reviews, you’ll know I’m a fan of roguelike platformers, and admire games that go the extra mile in terms of accessibility to players.  In addition to that, I’ve loved birds since I was a child.  So I’m delighted to share a game that has all three of these things.

Eagle Island is a roguelike platformer where you play as Quill, a falconer.  When one of Quill’s owls is kidnapped by a giant eagle, it’s up to Quill and his other owl, Koji, to rescue their friend.  This leads them on a journey to an ancient island, discovering its past and finding the reason why the eagle, Armaura, is going on a rampage.

I’ve been excited about the game since I first saw it on social media, and the publisher was kind enough to give me a Switch copy to review.  So let’s fly right into it, and explore what Eagle Island has to offer.

Violence:
Taking out enemies is a big part of the gameplay, which you do by launching Koji at them.  When they die, enemies just poof away, with no blood or gore, and leave treasure behind.  The game sports a kid-friendly style, and this carries over to the battles, which are cartoony in nature.

As the game goes on, you unlock different forms for Koji: a fire form, a lighting form, and an ice form.  There are other powers you can find, but I’ll leave them for you to discover.

In combat level, you find different “runes” that help you traverse the level—the runes can affect Quill or Koji, and many of them change up combat or movement.  Be careful though, because they break over time!  That is, unless you have the “permanent runestones” option on, like I did.

Spirituality:
There are different bird spirits on the island known as “Totems.”  They unlock new powers for Koji to use.  Later, we learn that the eagle Armaura is a deity, and together with the Totems, she helped protect the indigenous people of the island.

Miscellaneous:
I’m so happy to say that Eagle Island has a slew of accessibility options!  After so many games with few or none, it’s nice to see a game that has so many options for players.

You can completely change the controls–if you’d rather a different setup, make a button do something else (on Switch, you can also apparently play the game with just one JoyCon, but I personally couldn’t get that working).  There’s a ton of options to make the game easier, from an aiming guide for when you’re attacking with Koji, to little pointers that indicate if enemies are ahead, to an auto-aim feature (which I found really helpful in my playthrough) Then there are the options for visuals: characters and/or platforms can be outlined, screenshake and flashing can be disabled, lighting can be disabled or reduced.  You can even reduce the game speed.

It is wonderful to see a game with so many accessibility options.  Go Eagle Island!

Positive Elements:
This is one of the prettiest games I’ve played this year.  I love the bright colors and bouncy animation–watching Quill move is a joy in and of itself.  The little touches in the world (frogs and bunnies hopping in the background, dandelion puffs floating in the breeze, etc.) charmed the pants off me.  And as a self-proclaimed “bird-nerd,” watching Armaura’s animations was always lovely, seeing her fly and dive off the screen.

Eagle Island’s soundtrack is also lovely.  As a fan of ambient music, I have to commend Johan Hargne’s work on this game—I’m going to have to pick up a copy of this sometime.

A Child’s Perspective:
The game has such a child-friendly look to it, and the mechanics are easy to learn.  I think any kid would want to at least try this—especially if your kid is an artist or animation lover.  And those who like roguelikes, or want to challenge themselves with harder difficulty, will really enjoy it.

Reviewers Thoughts:
Eagle Island seemed to be everything I wanted from a videogame: a roguelike platformer with beautiful art and BIRDS?  What more could I ask for?

And at first, the game fulfilled this perfectly, with its pretty world, fun gameplay, and intriguing story.  But the further I got, the more flaws I saw.

For one, this game’s difficulty can fluctuate quite a bit.  The majority of Eagle Island I found to be pretty hard, even with the easiest difficulty option—I died a lot.  But the boss battles, for the most part, are absurdly easy–aside from a few that really ramped up in difficulty.

My second problem is that the game doesn’t really change as you play.  You do unlock new areas and new abilities, but you always do the same thing throughout: find a level, travel the level and kill enemies, fight a boss and get a new ability, repeat.  Sometimes you have to fight a big boss, but it still feels the same.  The game never really changed things up–either adding new platforming gimmicks in each level, introducing something besides platforming between levels to break up the pace (perhaps puzzle segments?), or giving the platforming sections new goals besides “get to the end,” would have really helped.  But overall, the entire game just feels the same.

Check it out and explore the island for yourself.