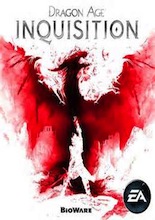 Bioware is known for their large, epic role-playing games that allow the player to dramatically alter the nature of the story, as well as their relationships with other characters in the game. Though Mass Effect is their most well-known work, Dragon Age follows right behind it as something of a fantasy equivalent. These games allow the player to make their own choices in an epic fantasy tale, and their choices are saved between games so their story can continue the way they want it to.

Inquisition takes place a while after the events of Dragon Age II, and the war between the Mages (powerful magic-users who face danger of possession) and the Templars (an organization designed to keep the mages in check, but that tends to be rather tyrannical) has been raging. In an attempt to negotiate peace, important figures from all over the continent meet at the Conclave… until the Conclave is destroyed in a powerful blast, opening a rift into the Fade and mysteriously leaving your character behind, with a mark on his/her hand that can close the small Fade rifts that are now popping up throughout the world.

Some believe you to be the herald of Andraste (the prophetess of the Maker, the predominantly-worshipped deity of the realm), whereas others consider you a heretic. But being the only one who can stop the rifts, you and some other figures of power form the Inquisition in order to set things right. Along the way, you meet a variety of characters that you can talk to and get to know, and even become romantically involved. The adventure sprawls across the world of Thedas, and the stakes grow ever higher as you uncover the secrets behind the rifts and your mark.

The gameplay is part exploration, part combat, and part talking to the other characters. When you’re not out in the world, exploring it and facing off against dangerous beasts and people, you’re at the Inquisition’s home base talking to the people who fight alongside you, getting to know them better. You’ll be fighting the enemy with a variety of medieval weapons and magic spells, as you grow close to the friends fighting alongside you.

But it’s an M-rated game with plenty of adult themes, so let’s get into the details: how appropriate is Dragon Age: Inquisition for your child?

There’s a lot of fighting, all from a third-person perspective. People are stabbed, slashed, burned, frozen and shattered, sucked into vortexes, slit across the throat, chomped by dragons, shot with arrows, and electrified, among other things. There is no dismemberment or anything, but there is a good deal of blood. Corpses are seen hanging from trees, burned on the ground, or simply stabbed and left to rot. Many of the enemies faced are fantastical creatures or spirits, but many are human as well.

The words “f**k,” “s**t,” and other language appears fairly regularly, but not constantly, alongside other, less offensive language like “asshole.” Sometimes, but rarely, in a sexual context.

The option exists to grow romantically close to one of many in the game, and most romances involve one sex scene. Some are implied, and one romance doesn’t actually involve sex at all, but the others show the beginning of an encounter (kissing, laying together on a bed, etc.) before cutting to afterward, or cutting away entirely. The scenes that take place after the implied sex sometimes include breast nudity, rear nudity, and more rarely, a full body shot (though with legs positioned over genitals). Some instances imply oral sex on both men and women.

Being a fantasy story, Dragon Age: Inquisition has plenty of magical elements. In the world of Thedas, magic comes from the Fade, another dimension in which reality is shaped by the mind and heart, meaning it’s more susceptible to change than the physical world, where reality is separate from our own consciousness. There are demons, but not as we define them; they are beings from the Fade that are brought into the physical world without the will to control themselves. If you play as a mage, you can learn elemental, spiritual, or necromantic spells.

Since the game puts many important choices in the hands of the player, it is possible for the player to be rather horrible. Various choices can result in the death of many people, or breaking the hearts of others, but they can also help others and fight evil. These choices reflect on the character of the protagonist and player both, and do not exist without consequences.

Homosexual romance is possible with some of the characters, and specific characters are only open to gay romance.

As a fan of the Dragon Age series, Inquisition has both met my expectations and fallen short in some ways.

The draw of these games is always the characters, and the various ways you can interact with them. And in this arena, Inquisition hits it out of the park. The people in this game are some of the most interesting and well-developed characters of Bioware’s history, and a couple rank among my favorite video game characters ever. They are easy to fall in love with as well, making the romance elements of the game quite fulfilling; my wife and I greatly enjoyed sharing the relationships our characters formed.

Unfortunately, the story has its interesting parts, but fails to live up to its potential with a disappointing ending, ultimately seeming like a long prologue to a short after-credits scene. The gameplay has been simplified; whereas previous games allowed you to set priorities and actions for your party, so they could act intelligently on their own based on your guidance, this one only allows a few vague directions, so the AI often doesn’t act as you would like, and you can’t control your party nearly as well without going into a micromanaging overhead gameplay mode.

It’s also much larger than previous games in the series–I did nearly everything I could, and I completed the game in over 120 hours–which seems nice at first, until you realize how much of the content is just fluff to pad out the gameplay time. Ultimately the game comes across as less memorable than previous ones, in no small part because of how the sheer amount of random little things you did throughout the game.

Ultimately, I’m glad I spent the time I did with Inquisition, even if it could have been better in a number of ways. It’s worth it just for getting to know the characters. But if you have children, I certainly do not recommend letting them play, at least not for a good long while. The sexual content is mostly to blame; while it’s not constant or pervasive, it can be fairly graphic depending on which romance you choose, making the game hard to recommend to younger audiences. I recommend heeding the M-rating on this one, and using your own judgment beyond that.