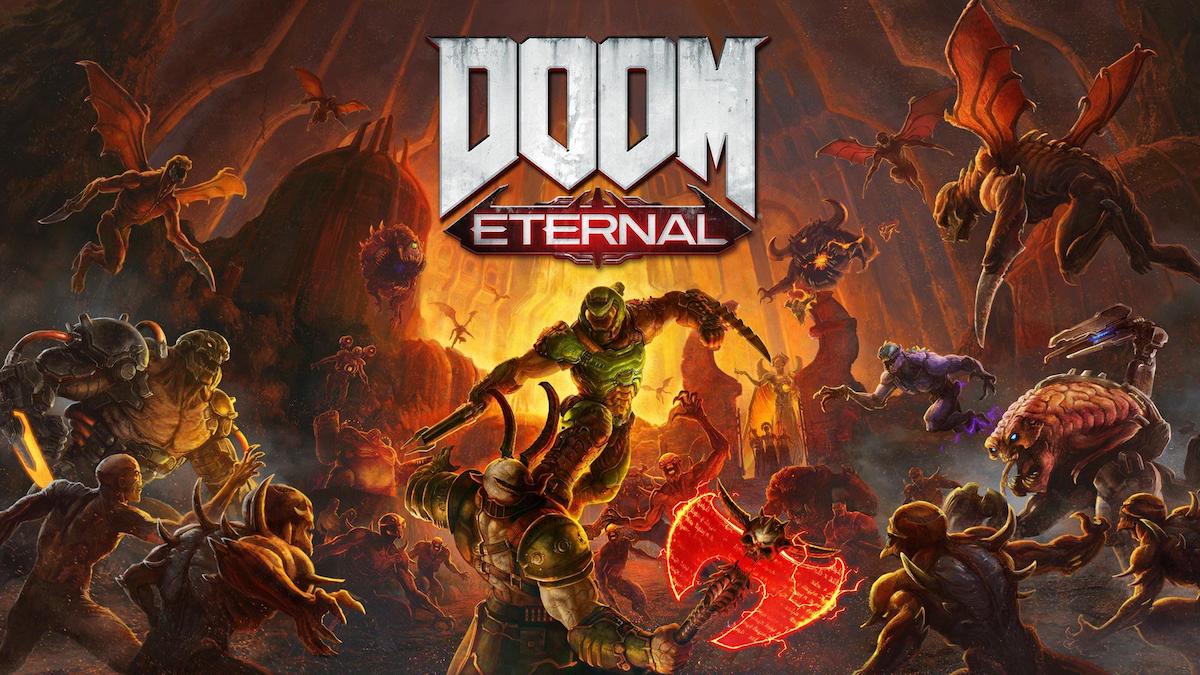 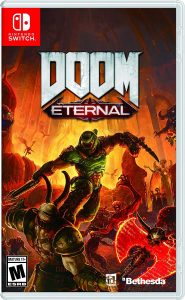 Game Description:
Back in the 90s, Doom released to tremendous scandal. Concerned parents protested its release and conservative politicians accused it of everything from normalizing violence to causing school shootings.

It’s been long enough since then that the idea of video games turning children into violent monsters has been rightfully rejected (even while we wrestle with the more complex and realistic questions of how popular art and the communities around it shape our perceptions and beliefs), and Doom is still going strong. Eternal is the latest in a number of releases, and a direct sequel to the massively popular 2016 reboot of the franchise.

The game is about an inhumanly powerful soldier who finds himself as the sole defender of humanity amid a demonic invasion. This new version expands on the lore significantly, including a corporation that essentially became a demonic cult for profit, as well as extra-dimensional travelers whose role in these events is significantly more complicated. They sure have changed a lot since the first game, which was just “there’s a portal to Hell on this Mars base, kill the demons.”

But on a gameplay level, the game is still about exactly that; killing a great number of demonic forces with speed, precision, and brutality. The game has a system that awards the player with ammunition, healthy, and armor based on how they kill the demons, ensuring that the best way to stay alive is to keep killing demons; as long as you play smart, there’s no reason to stop shooting until they’re all dead.

I expect you already know how this game will be for your children, but let’s take a look at the details.

Violence:
Doom Eternal is… cartoonishly gory. I mean that quite literally; the creators of the game researched slapstick comedy (like The Three Stooges) in designing the gory kills, hoping to make it more about absurd, over-the-top brutality than disturbing, hateful violence. And they succeeded, but that doesn’t make the game any less absurdly gory.

As the player shoots demons, their flesh begins to visibly tear and rend, revealing flesh and bone as they are closer to death. But the real violence comes in the form of “Glory Kills.” When an enemy is near death, they flash and glow, and the player can finish them off with particularly brutal, up-close tactics. Exactly what this looks like varies depending on the enemy; the player can use a chainsaw to cut zombie-like thralls in half, use a knife to cut long, snake-like demons into multiple parts, pull the eye out of a floating orb so it explodes, and a good number of other brutal ways to kill demons.

The environments also include a lot of violent imagery. Some places have human remains strewn around, like human bodies with limbs missing. There is also a location called a “gore nest,” and it’s basically a demon hive that consists entirely of slimy gore. Think like a wasp nest if it was made with meat and entrails.

Language:
Mild language such as “damn” is used on occasion.

Spirituality:
Considering the game is about battling demons, the game obviously makes a lot of religious references. It’s unclear exactly how well the demonic forces fit into the Christian understanding of hell and demons, but there are many references to the demonic invasion of Earth as the final judgment for humanity, and some people question whether the Doom Slayer has a role in the religious understanding of the end of days.

The game also has extradimensional aliens who are also entangled with the demons, so clearly it’s not trying to base itself specifically off Christian theology. The elements are there, but not really the game’s guiding light.

Positive Elements:
The game has a running theme, often played for dark laughs, of humanity’s role in its own destruction. The demons aren’t simply an outside force that invaded out of the blue; they were brought here by the greed of people who thought they could exploit Hell for their own profit. This is not significantly expanded on–if anything it was clearer in the 2016 game than this one–but the demons are here because of mankind’s sin and hubris.

Reviewers Thoughts:
I’m gonna’ address the elephant in the room first; I never really understood why Christian culture has such an aversion to the portrayal of demons in media. In most cases–including the Bible itself–the simple portrayal of something is not, in and of itself, a negative thing. A story that glorifies demonic forces and the evil they represent would be concerning, obviously, but games like Doom and Diablo, while heavily fictionalized and not representative of actual Christian theology, are not that. However much demonic imagery accompanies them only a very small part of the overall picture; these stories are about fighting evil and resisting demonic influence. So I never really understood the tendency to paint demonic imagery as inherently dangerous.

With that said, Doom Eternal has plenty of other reasons it’s not appropriate for children. Or really just one, I suppose; the completely absurd amount of gory, violent mayhem. It revels in the destruction of these demons, and treats their destruction as not only a glorious accomplishment, but a goofy romp. Doom Eternal is about taking something horrifying and evil, and basically pointing and laughing at it, relishing in the lack of power it has against you.

And sure, the reason for that is less about relying on Jesus and more about how many cool guns you have. I suppose it’s up to you to decide how important that framing is for a sci-fi action game. But when all is said and done, Doom Eternal is primarily two things: it’s a ton of fast-paced, ridiculous fun, and it’s also… kind of empty.

For as convoluted as the story is, it’s not interested in saying that much. It has a lot of subtext about greedy corporations, human sin, and the co-opting of good language and values to serve evil purposes, and that’s not nothing. It just also isn’t really a primary focus of the game, and it shows. It’s mostly about killing demons in cool ways while raging metal music with apocalyptic choral backing spurs you on. And I don’t think that’s a bad thing, really. It just also doesn’t offer much.

So if you have a mature teenager who really wants to check this game out, I could think of worse things you could give them. But while Doom is certainly not the scandalous murder simulator it was once made out to be, it is still, as ever, not a game for children.