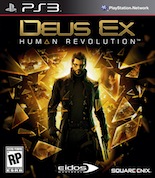 Deus Ex: Human Revolution is the third game in the popular Deus Ex series. It is a prequel to the first two games and it is also the first Deus Ex game to arrive on the current generation of game systems, so for many this will most likely be their first experience playing a Deus Ex game. The game takes place in the year 2027. Most of the environments have a dark cyberpunk atmosphere to it. If you have ever seen the movie Blade Runner, the environment is very similar to that.

You play as Adam Jenson, former Detroit police officer and now head of security at Sarif Industries, a company known for enhancing humans with cybernetic augmentations. At the beginning of the game Sarif Industries is attacked, the team of scientists that lead the augmentation team are killed and Adam is left for dead. Adam does survive the attack, however, in part due to the fact that cybernetic augmentations are given to him to save his life. Now, Adam is a super soldier that must try to find the source and reason for the attacks on Sarif Industries. This will take him on an adventure through Detroit, Shanghai, Montreal, and Singapore.

The game is played primarily from a first person point of view. When crouching behind corners or items, however, such as crates, the view will switch to a third person point of view. Adam can use different types of guns and grenades which play out very much like other First Person Shooters, but there are also many RPG elements thrown in to the gameplay. For example, Adam gains experience points for defeating enemies or completing missions. This in turn allows Adam to upgrade his augments which allow him to gain new abilities and/or upgrade abilities. Another RPG element thrown into the game is the ability to have conversations with other characters and choose how you want Adam to respond to those conversations which in turn will affect the story.

What Parents Need to Know (Warning: This Review Contains Spoilers)

Much of the game is played out like a typical First Person Shooter. When someone is shot, blood is shown. Adam can also sneak up behind people and do stealth kills or stealth takedowns, when this happens a short scene is shown of Adam taking the person down from a third person perspective.

Not all weapons are deadly; many weapons will just knock people out unconscious. Also, the game rewards the player for committing non-lethal takedowns with higher experience points.

It is also possible to kill civilians, although this can negatively impact your performance.

The final battle does require having to shoot people that are strapped and plugged into a supercomputer.

Some of the story cutscenes are violent. For example, one cutscene shows a man kill himself by shooting his brains out which you actually watch. Later in the game, you encounter his body in the morgue and can again see the wound on his head.

Deus Ex: Human Revolution has a fair amount of bad language in it including the words f**k and s**t.

Many of the women in the game show lots of cleavage.

One area has a woman pole dancing. She is dressed in a seductive leather outfit.

In different parts of the game, there are pictures hanging of seductive looking women.

There is sexual dialog in certain parts of the game. For example, one mission takes place in a brothel where part of the conversation involves talking about augmentations to enhance sexual performance.

One of the themes of the game is transhumanism, the idea of genetically modifying the human body to make it better. In one part of the game, there are protestors holding signs that say things like “Stop Playing God.”

There is also reference in the game to the Greek Myth of Daedalus and Icarus, and how augmenting the human body may seem like a good idea, but how close should we really fly to the sun?

One mission involves planting illegal drugs in a man’s apartment in order to get him arrested.

The player can have Adam drink alcoholic beverages in order to enhance his abilities.

I thought Deus Ex: Human Revolution had some great ideas. The way you could enhance Adam with augmentations was a lot of fun, especially as you made Adam more powerful. I was disappointed, however, in the story of the game. I thought it was very predictable and not all that exciting. The gameplay was well done, but I did not feel it did anything too different than what other First Person Shooters have done. The game has been getting lots of high praise from critics, so do not be surprised if your child asks to play this game. In addition to the above mentioned content, please remember, however, that the game is rated M for Mature.