Destiny: The Taken King–Year One Expansions

Destiny: The Taken King–Year One Expansions 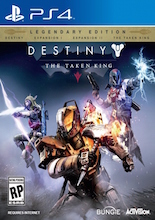 Destiny has been out for over a year now, and we’ve seen their plan in action; they’ve released three expansions to date, the latest of which, The Taken King, has been released with the base game and the previous two expansions along with it.

We already reviewed the base game when it originally released, and The Taken King doesn’t change much in terms of content, but it’s worth keeping you informed on any altered or additional content the game undergoes that could be relevant to your children.

As before, Destiny is still a sci-fi adventure through a dangerous, tainted solar system. Humanity has been granted technology so advanced they don’t even fully understand it, but in its wake came creatures of such vast power that the human race is barely holding on. You’re a guardian, brought back to life by the light of the Traveler (the mysterious being that granted humanity these advancements) to defend it, and humanity, against the dark creatures that now threaten you.

Since the first game, new developments have arisen. You killed a powerful creature named Crota, and his father, Oryx, worshipped as a god by some of the alien invaders, is coming to take his revenge. He brings with him the power to rob creatures of their free will and their identity, and he uses these “Taken” creatures as an army against you. And so you once again fight to protect humanity from threats beyond its comprehension.

Originally, Destiny was a nice surprise, a T-rated shooter your children could enjoy far more easily than the average M-rated shooter romp. Let’s see if that’s been maintained.

Destiny is a shooter, so naturally you’re looking through the eyes of your character and using a variety of weapons (mostly guns, but now also swords) to kill hordes of aliens and robots. There’s a little blood if you look close, but the vast majority of the violence is sparks and colorful explosions, much like your average Star Wars film.

I’ve not noticed any language over the course of playing the game, even with the vastly expanded dialogue of The Taken King.

Nothing to speak of. In fact, the game boasts impressively realistic and practical armor for both men and women; no skimpy high-level armor to be found.

The power of the traveler is established to be scientific, but it’s also so advanced that we don’t understand it, and it’s portrayed as magical. There are references to rituals, “passing on” after death, and keeping a creature’s soul inside a gem; again, all technically scientific, but so far beyond our understanding that it comes across as quite magical.

Some of the enemies are characterized by demonic imagery; the Hive in particular are designed to invoke concepts of demonic threats, but they are ultimately aliens, not demons. Eris Morn, a major character who spent so long surviving in the depths of the Hive, looks to have darkness trailing down her face from her obscured eyes. Ultimately, the game intends to invoke imagery that makes clear the evil we face.

Since the game is played online, players can talk with other people over the game, and of course the game has no way of controlling what they say or how they talk. You can control your children’s voice chat options from the console’s menu, and I recommend making use of such parental controls as you see fit.

A Child’s Perspective: I work in game retail, and I can personally attest to the fact that many children love this game, so I wouldn’t worry about it boring your child, though some elements may scare young children.

Destiny was an ambitious project, and while I very much enjoyed the original release, it had a lot of problems; repetitive content, uninspired mission design, a confusing story with little to no development… but Bungie has listened to complaints, and they’ve delivered. The first two expansions (The Dark Below and House of Wolves) had some nice content, but The Taken King has changed many of the core mechanics of the game, making it simply feel nicer and more satisfying to play. It also greatly expanded the story, characters, and lore. In general, Destiny is a far, FAR better game after the release of The Taken King.

As for whether your child should play it, the game has delved into some darker themes since the original release, mostly with the two expansions focused on the Hive. But aside from a darker tone, the actual content of the game remains at about the same level, so if you’re concerned about violence, language, or sexual content, the expansions offer no developments on those fronts; Destiny is still a refreshingly kid-friendly shooter, so long as your child can handle the darker tone and the online interaction.