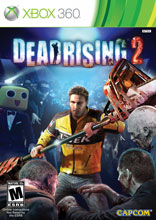 The zombie outbreak that happened in the first Dead Rising game is now nothing more than a social condition; a fact of life that society has accepted and to which it has adapted. An expensive drug called Zombrex has been developed to counter the effects of a zombie bite. Though the disease that turns one into a zombie may be incurable, it is preventable if one consistently injects Zombrex. Chuck Greene knows this all too well, as his young daughter must be injected with Zombrex every 24 hours to keep her from becoming one of the undead ghouls. Chuck does whatever needs to be done to earn money, even participating in “Terror is Reality”, a controversial game show comprised of killing zombies in various ways (vehemently opposed by zombie rights groups). But when the zombies are let out and create an outbreak in Fortune City (think Las Vegas), Chuck is blamed for the sabotage. With his daughter safe in a bunker, Chuck has three days before the military arrives, to save as many people as possible and clear his name, while also finding Zombrex to give his daughter every 24 hours.

The first Dead Rising was unique in that it let the player choose almost any objects around the mall in which it took place to use as weapons against the zombie horde. The sequel takes this to new heights, allowing that and more with the ability to combine certain items to create deadly and effective weapons ranging from laser swords to exploding footballs. Using these weapons, the player (controlling Chuck in third-person) will wander around the malls and casinos of Fortune City rescuing survivors, battling dangerous psychopaths (presumably driven crazy by the stress of the situation), and of course, killing hundreds of zombies.

That is really all Dead Rising 2 comes down to: use improvised weapons to kill as many zombies as possible. There is an interesting story, fun characters, and a huge variety in what the player can and must do around Fortune City, but the main appeal of the game is the sheer amount of variety in the ways the player can destroy the undead.

The very appeal of zombies as a creature of horror, aside from the countless hordes, is the fact that nothing short of removing the head or destroying the brain will stop them. They are the only enemies that will remain undeterred even through wounds and dismemberments that would stop any living being in its tracks. So it goes without saying that anything involving zombies will be graphically violent. In Dead Rising 2 you have an environment that freely allows the player to explore ever more efficient and entertaining ways to kill their undead enemies. Make no mistake: this game is extremely violent.

The sheer variety of weaponry means that there are many graphic ways for a zombie to be destroyed. They can be dismembered, electrocuted, impaled, shot, beat down, blown up, or cut in half (usually horizontally, but in some rare cases also vertically). The graphics do not go so far as to detail organs, so zombie gore just looks more like ground beef than human gore, but that does little to make the game less of a bloody mess. After intense battles, Chuck’s clothes will be stained red to varying degrees (fading away after a while). Zombies will also attempt to bite and/or eat humans, resulting in bloody (but not detailed) results.

Some humans are killed as well, usually by the psychopaths that Chuck encounters. Twice, scenes show people cut in half (both times there is blood, but the actual cut is not seen). The psychopaths themselves (as well as some of enemies) tend to die accidentally by their own hand rather than any actual effort on Chuck’s part; the more graphic of these include a man repeatedly stabbing another, one slitting his own throat (he is turned around, so the player does not see the cut), and a man falling on a table-saw (again, the cutting is not seen, only his body convulsing and blood spurting). As for human killings on Chuck’s part, he will have to battle some looters and many armed mercenaries, but their deaths are generally less graphic than those of the zombies.

Fortune City is (or was, before the outbreak) a city of vice. As such, there are many characters (and zombies) that are dressed as strippers. In addition, Capcom made a deal with Playboy to include posters scattered around the city; this was supposedly to add a realistic element to it by referencing a real-life magazine. Instead, we get an awkward city that has posters of near-nude women (never any complete nudity). Apparently, with the exception of a few random movies and shows in the city, Playboy is the only thing that is sold in the world of Dead Rising 2. Interesting (if inappropriate) idea, but poorly implemented so as to completely negate its intended effect and make for nothing more than the presence of inappropriate posters.

The game has more than its share of sexual references, so I will not even try to mention them all. Sometimes these will be made by women (often with quite a bit of cleavage) making crude remarks to Chuck, but it is usually in the form of psychopaths, survivors, or other random characters. One of the announcers in the “Terror is Reality” gameshow (which can be played online for in-game money) makes a sexual reference at the beginning of pretty much every game. The most… unexpected was the inclusion of a rarely-found “massager,” which is obviously a sex toy. Rest assured, it is only used to beat zombies to death.

A lesbian relationship is implied at one point. Also, there is a particular survivor that is determined to finish her performance, which consists of her dancing in very skimpy clothing and speaking/singing in a rather breathy and seductive voice.

Dead Rising 2 has no full-on nudity or sex scenes.

I will not lie; this game is fun. The sheer amount of different weapon combos you can make means that there are countless different ways to take out zombies. Combine that with the quirky, over-the-top style of the game as a whole, and it is quite an entertaining piece. However, it is not without its problems. Outside of the occasional glitches (including an annoying one that ejects a co-op partner whenever the game is saved), it is hardly the most family-friendly game out there. Considering the sizable amount of content listed, I doubt I have to explain why. This game is definitely not for children.