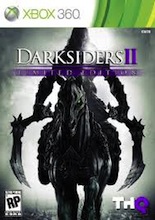 Darksiders II follows the exploits of Death, the brother of War, and another one of the four horsemen of the apocalypse. In this game, Death comes on the scene during War’s imprisonment for prematurely starting the end times. Bent on proving War’s innocence, Death sets out to resurrect humanity in order to set things right in the world and to clear his brother’s name.

Darksiders II is a hack and slash game very similar to God of War. Death is sent from place to place and dungeon to dungeon, clearing all locations of their inhabitants and earning another piece of the puzzle to reanimating humanity. As Death progresses through the worlds, he meets angels, demons, and other creatures who flesh out the story and give him side quests to complete in return for experience rewards, money, or rare items.

All the environments that Death traverses are highly detailed and very colorful. The game has a cartoonish feel while also being very visceral during times or battle. The primary boss battles are epic in scale, and the musical stylings put in place by the developer’s composer hit intensify the key moments of the key to an engaging zenith.

Being a hack and slash game similar to God of War, there is a significant amount of violence in Darksiders II. Death’s primary weapon is a pair of scythes, and he can use secondary weapons such as gauntlets, hammers, armblades, claives, and others which offer variations in attack speed. Death also gains a 10-shot pistol during the game which can be used to dispatch enemies. When Death is engaged in battle, his enemies will issue forth significant amounts of blood with each blow landed by Death. At times, the player is able to engage a short cinematic where enemies are killed in ways more brutal than usual. Boss fights generally end with a short cinematic where Death becomes a grim reaper and finishes off his opponent.

Finally, to turn the tides of battle when Death is facing overwhelming odds, the player can engage ‘Reaper mode’ where Death takes on his grim reaper visage with increased attack strength and defense. This mode only lasts for a short period of time, but is devastating to enemies.

There is no significant language concerns in Darksiders II

There is no overt sexual content in Darksiders II. That being said, almost all female characters in the game have some form of exposed cleavage. One particular character named Lilith (who will be discussed again later in this review) exposes the most cleavage and her breasts are animated to have a slight jiggle as she walks. Also, an enemy known as a wraith has some exposed cleavage and a partially exposed butt.

This will be the most important and therefore extensive section of this review. Given the subject matter that comprises the Darksiders’ universe, a significant look at the spiritual implications of this game is warranted.

First off, the games of Darksiders and Darksiders II take significant liberties with the Biblical view of the apocalypse. References to the four horsemen of the apocalypse are about as close to a Biblical reference that the player will find. Nothing else in the game points to any type of Biblical truth, and even what “does” is merely using a name. The horsemen, Death, in Darksiders is NOT the horseman referenced in the Bible, and this must be stated first. The character Death in Darksiders II is actually considered a nephilim (another biblical “reference”), which in the game is defined as a fusing of angel and demon rather than child formed by the union of a woman and a fallen angel.

Secondly, instead of God creating Earth, living beings known as Makers where made by “The Creator” and the Makers made the planet Earth and other worlds.

Third, when anyone with a soul dies, they move on into the realm of the dead, where they are judged and soon set back on a path towards the “Well of Souls” and being reborn.

Finally, though not Biblical, there are numerous characters who share names with characters spoken of in certain aspects of Judaism. The angelic character of Uriel, the demonic character of Samael, and the character of Lilith are all referenced in some way in ancient Jewish texts or even some Catholic apocryphal texts. As a reviewer, I find this important to point out because it is important to be able to distinguish God’s truth from what is not. If a child is curious about these characters in the game and searches the Internet for more information, he or she may find things they attribute to be Biblical when they really are not. As an example of what I mean, I will use the character of Lilith. In the game, Lilith is the demon queen and mother of the nephilim. If further research is done, it is found that Lilith is a character is Jewish mysticism dating back to post-exile Jews. According to legend, Lilith was Adam’s first wife. She left Adam because she would not subordinate herself to him and went and mated with Samael, an archangel. This information I am sure is not 100% accurate to what is believed about Lilith, but it demonstrates the need to be able to tell truth from fiction.

From a gamer’s standpoint, I did thoroughly enjoy playing Darksiders II. Many of the game’s aspects are taken from other successful games and the developers of Darksiders II certainly employed these to perfection. The main complaint for me as a gamer is that the story in Darksiders II is very flimsy. At best, the story can be summarized as “Go there, kill everything, come back, and I’ll tell you where to go next…” There is no real urgency in the story, nor is there any real attachment to any characters in the game. As stated before, the music in the game is truly one of the best parts of the game. It adds a level of epic to portions of the game that would be absent without the music.

From a Christian’s standpoint, I feel that caution must be exercised when letting a child play this game. Sin and the devil only need small footholds into some one’s life to create influence, and the content matter of this game has the potential of being dangerous. Personally, I found myself seeing aspects of this game in my dreams, which though, through Christ, it has no power over me, it can be very scary for someone who is not claimed by Christ. Exercise caution when deciding to let your child play this particular game.