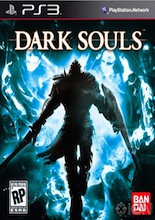 Dark Souls is a brutal, and violently difficult action-rpg. Dark Souls is considered a “pure game” as it does not provide much in the form of narrative leaving the player to piece together and interpret the story for themselves and the fact that the game requires an ever-growing skill level in order to overcome the many perils the world provides.

The degree of difficulty and learning curve harkens back to the olden days of the NES when games would often be very challenging.

In the game you will find your self dying quite a bit and this is melded into the game’s story and lore. When you die you can still play but you will be a “Hollow” or undead. You can regain life again either by finding your dead soul, or by using humanity points at a bonefire.

The game’s atmosphere is very dark and foreboding and the many monsters and demons can be quite grotesque in appearance.

The game is mainly played in single player, but the game does allow you to summon souls (other players) from their game world to assist with boss battles. Or you, the player, can invade another person’s world in attempts to kill them in order to gain more souls (the game’s currency for upgrading skills or purchasing weapons) or even weapons.

(The following sections are meant to be informative only. Do not act disgusted or offended in your remarks by the games content. The purpose of our reviews is to inform parents, not to push our personal convictions on parents, but to inform you of the content so that you can decide what is best for your family.)

The game is extremely violent as you will be killing hundreds of enemies by using swords, bows, hammers, magic, axes, and many more types of weapons. Blood splatters with every hit of a weapon, bodies can be seen burning on the ground, and one scene features a mythical creature being decapitated.

There is a mostly naked semi-human female enemy (a giant spider lady-in human form from the waist up) who hides her breasts with her long hair.

Part of the time you play as an undead character, and the currency in the game is the souls you collect from enemies you defeat (thus the name “Dark Souls”).

Also, the game is of course very dark and there are lots of demons and monsters.

Even if you decide your kids are mature enough and you are OK with the game’s the content, they may not be prepared to handle the brutal difficulty of this game. This game is meant for experienced players who find reward in overcoming very difficult challenges.