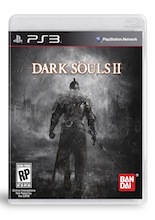 Dark Souls II is a third person role-playing game. Inspired by the early video games whose difficulty was unmatched, this game is a challenge for even the most seasoned gamer. It prides itself on making the player die over and over again. Set in the fantasy medieval world of Drangleic, the player must overcome enemies, challenges, and obstacles in order to find his or her soul. Players reap their enemies’ souls; using them to level up, increase the power of their weapons, and receive items. However, if the player dies and is then unable to return to the spot that they died to retrieve their souls, those souls are lost forever. This is a game that shows no mercy.

Violence:
The violence in this game is easily recognized as unreal. However, you do hit things with large or sharp objects quite frequently. The game does a good job of making sure that you never attack anything human (well, you can attack some humans but they are always helpful and defeating them has some pretty major consequences, like not being able to progress through the game). Every enemy is fantastical in appearance, and few actually resemble human beings (even the ones that do have a sickly green skin color). The player hits the enemies with swords, clubs, spells, and hexes that make the enemies lose health, but they don’t bleed. Enemies react to being hit, and so does the player. The only blood that appears in the game is in what are called “bloodstains,” which the player can interact with and see where other players have died. It is also present where the character last perished. The player dies, but disintegrates into a cloud of black and grey ashes, followed then by a respawn at the previously lit bonfire.

Language:
The only bad language used is the inevitable stream of profanity when your player dies for the 3,000th time.

Sexual Content:
The player can remove the clothing of the character, however there are still undergarments worn.

Spirituality:
One may become a cleric for casting miracles or hexes, however the description of what these spells are does not go any further into detail. A player may also cast spells as a sorcerer, but again no understanding of why the character does this is mentioned.

Miscellaneous:
Dark Souls is one of the hardest franchises I have ever played. Although there are no “lives,” the game makes sure that its difficulty is equally matched by its playability. The game is a lot of fun, and the added challenge gives it an edge. Because it’s not as easy as other videogames where you have infinite chances with no consequences, the game can get frustrating for some. Also, this game may be scary for younger players, as the monsters can get pretty grotesque.

Parents Note: Players may save the game anywhere, but must be in a safe place in order to do so.

Reviewer Thoughts:
This is one of those games that I had no problem finishing, because I wanted to see what happened in the end and I had invested so much time into my character. This is the kind of game I enjoy: gameplay that is lengthy and challenging with the story embedded in the player’s actions, not necessarily cutscenes for every new plot device.

Oh, and this piece of advice will save you hours of frustration: apparently, the Emerald Herald is the woman in the green cape/jacket who stands next to the first bonfire in Majula, and she is how you level your character. Leveling your character is the only way to hit harder and carry better stuff, so you need to do that. Don’t be like me and wait until a quarter of the way through the game to figure that out.

When the game was over, I found myself wanting to play again. I suggest this game to anyone who likes RPGs or a challenge! And while suitable for children, I believe this game would not go well in today’s young gamer market because they are used to significantly less challenging games. It may just not be fun for younger gamers.