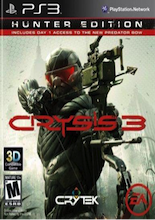 For seven years, the Crysis games have been one of the biggest gaming franchises since the first Crysis game hit computers in 2007. Praised for its beautiful graphics, it rivaled games like Half-Life 2 for exceptional graphics and phenomenal gameplay.

Crysis 3 takes place twenty-four years after the events of Crysis 2, after the player terminated the invasion of our planet by aliens called the Ceph.

In the beginning of Crysis 2, the player, Alcatraz, was gravely injured in the beginning of the game, and Prophet (a major character from Crysis 1) saves his life by giving his nanosuit to Alcatraz, sacrificing himself in the process. Prophet kept his memories and personality in the suit, which essentially brings him back to life (in a manner of speaking). Prophet wakes up after his twenty-four year long hypersleep, discovering that the corrupt CELL corporation has killed off or detained nearly all the soldiers in the Nanosuit program and imprisoned New York City in a humongous nanodome. Nobody takes the alien threat seriously anymore, as everyone believes they were wiped out during the events of the last game. What is even worse is Prophet’s visions of the Alpha Ceph, the aliens’ leader, and the utter destruction of Earth. Joining forces with the resistance group, including an old ally from Crysis 1, Psycho, Prophet once again steps into the dense jungle of New York City (literally) to save the earth from another crisis (pun intended).

There is some footage from Crysis 1 and 2 at the beginning of the game, which shows some violence, including one character shooting himself in the head (camera jerks aside). Some of the cutscenes in the game are pretty violent, but mostly bloodless. There is a dead soldier shown on a TV monitor.

Violence is always in self-defense, and includes, but not limited to: Shooting, incineration, gripping an enemy’s throat and bashing him into a wall, stealthily stabbing an enemy in the back, compound bow shots, etc. Alien and Human enemies spurt realistic blood upon death. Blood can be seen splattered on the walls or floors, in realistic detail. Blood is red, pink, or black in color. Blood can also splatter on the screen if taking damage or killing an enemy up close.

Enemies can be killed with a variety of weapons, including a Predator Bow, Ceph weaponry, and explosives. Ceph sometimes explode into gory pieces if shot by heavy weapons or Ceph weapons. Some Ceph can have their heads shot off upon death. Some CELL soldiers are incinerated by flames and can be seen screaming and dying. One level takes place in a skinning lab where a fellow soldier was tortured and removed of his nanosuit. Bodies of CELL soldiers and scientists can be seen lying around the lab. There is a torn up body of a nanosuit-clad soldier lying on the table, blood shown. A nanosuit-clad soldier falls to earth with his arms burning up.

There seems to be a romantic relationship between Psycho and Claire, but no sex is depicted.

The player isn’t called “Prophet” for nothing. In many parts of the game, he receives images and visions of the Ceph destroying the world. Someone calls him “prophetic,” in lieu of these visions. One minor character has extended his lifespan by using Ceph technology.

Sometimes, a dead CELL soldier can be found sitting on a toilet, though wasn’t apparently using it.

Claire at first mistreats Prophet because of his alien nanosuit, not believing him to be human. She later says she wishes they had gotten off to a better start.

Spoilers: Claire, as it turns out, was forced to work for CELL and did some terrible things to people with the suits. She admits her guilt, but Prophet and his comrade, Psycho feel betrayed. Prophet tells Psycho that it is being human that will save them, not the suits. Prophet is trying to save the world from extinction, which makes him a good role model. He even asks, “When you sacrifice everything to become a cold, calculating, hard, logical machine, and that machine fails…what then?”

A Child’s Perspective: In my last review of Crysis 2, I mentioned that it was appropriate only for 17-year olds or older. Crysis 3 is no different here, thanks to the amount of violence and language.

The Crysis games have always impressed me for their graphics, gameplay, and story. Crysis 3, I can honestly say, has done it again. I especially liked the Predator Bow, though I do wish it had more ammunition. Crysis 3 is essentially Iron Man meets Rambo in this installment, with the stealth-like (and brutal) tactics and weaponized soldier armor.

For fans of Crysis, I would recommend as a must-have to their game collection, but parents should still keep in mind the violence and language before letting their kids play this game.