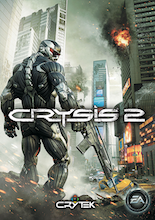 Since its release in 2007, Crysis has been one of the most popular first-person shooter games since Halo and Call of Duty. Known for it’s incredible graphics (especially on PC) and the game engine CryEngine 2 (successor to the Far Cry game engine), Crysis earned much critical acclaim and was awarded Game of the Year by PC Gamer.

In the first Crysis game, players take control of a nanosuit-clad soldier named Nomad who goes to the islands of Lingshan, islands controlled by the North Korean military. The North Koreans have kidnapped some archaeologists who have discovered an ancient alien species living dormant on the island, and it is up to the player to rescue the archaeologists and stop the pending alien invasion.

Crysis 2 takes place three years after the events of the first game, where New York City is devastated with an alien epidemic called the “Manhattan virus” and the invasion of an alien species called the “Ceph.” Players take control of a marine codenamed “Alcatraz”, whose life is saved by a nanosuit similar to Nomad’s. Alcatraz’s mission is to find out the secret behind his suit and end the Ceph’s brutal conquest once and for all.

This game is played from a first person perspective, where the player must fight through entire squads of aliens and rogue humans known as C.E.L.L. (Crynet Enforcement & Local Logistics), soldiers employed by Crynet, the nanotech corporation that created Alcatraz’s suit. The violence in the game is similar to Battlefield: Bad Company 2 or Killzone 3, as enemies will spurt blood when shot, and even bleed out on the ground. Aliens also bleed, but the blood is pink. No dismemberment. Alcatraz can also sneak up behind enemies and stab their throats or grab them and throw them into walls. Headshots are accompanied by realistic sounds, and blood splatters on the screen when the player is shot or killed.

The “Manhattan” virus has graphic symptoms, where infected civilians display rotting flesh, and some are completely dissolved into piles of bloody goop. This game is obviously NOT for the weak of stomach. One infected character shoots himself in the head, another character is thrown out a window and crushed on the pavement, blood shown, and one character is implied to have died in a building explosion. Dead rotting corpses are also seen with flies buzzing around them, which is quite disturbing.

One or two sexual innuendos but both are used as a metaphor. The ESRB mentions Partial Nudity, but I am not aware of any nudity of any sort in the game.

There are a couple of references to the evolutionary theory concerning the aliens.

SPOILERS: Before the main antagonist dies, he asks Alcatraz whether he believes in Heaven or Hell, but tells him that one “unlearns these falsehoods over time” and calls his life in cryostasis more of a “purgatorial” state, and would prefer oblivion over immortality. This is only uttered by the main antagonist, so it is unclear whether Alcatraz believes him or not.

There are a lot of allusions to “transhumanism” and the theory of prolonging a man’s life through cryostasis. There was one part of the game where some soldiers try to rescue some civilians from a collapsing building, but they drive away after being nearly crushed by it, leaving the civilians to their fate. Most of the killing in this game is in self-defense anyway, but you can choose to shoot infected civilians.

Crysis 2 has got to be one of the most entertaining games I’ve ever played, though I did find the campaign to be a little long. It is really cool to wander through a war torn New York City and adapt your fighting style to the urban environment. The graphics were very beautiful on PS3, though I hear the PC really does it justice. For those who have watched I Am Legend, the setting of the game is sort of similar, except the humans aren’t turned into sun-hating zombies, and you are not the last man on earth. The gameplay is fairly average, making it neither too easy nor too hard. If you are looking for a great sci-fi shooter, then Crysis 2 is probably the game for you.

Due to the violence and language, I only recommend this game to teens over 17 or adults who are not easily bothered by the aforementioned content.