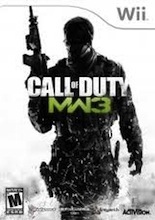 In the final installment of the Modern Warfare trilogy, the world is at war once again, spurred on by the events of the second game, in which a Russian terrorist named Makarov tricked Russia into thinking the United States was behind a terrorist attack to kindle the fires of war. Now, with the world engulfed in conflict and the surviving characters from the previous game as fugitives, the player must take the roles of various people from across Europe, the United States, and Russia in order to find Makarov and stop him from further fanning the fires of World War 3.

But despite that story setup, the most popular contribution of the Modern Warfare games (and the Call of Duty series in general) is the online multiplayer, which allows any Modern Warfare players to compete in battles of skill, teamwork, and prestige from anywhere in the world. Odds are, if you’re the parent of a teen, you’ve heard the name Call of Duty more often than Halo, Smash Bros., or any other big multiplayer game out there. Modern Warfare 3 broke records as the fastest-selling media product of all time, having reached the $1 billion mark in only 16 days.

Considering the series’ past, Modern Warfare 3 has a lot to measure up to. The first Modern Warfare was a landmark in first-person shooters, redefining many aspects of how online multiplayer works and presenting a single-player campaign that is still considered a pillar of interactive storytelling for its unique and powerful presentation of the story through the first-person perspective. However, seeing as developer Infinity Ward had a bit of an implosion mid-development (the president/game director and CEO were fired, followed by the resignation of about half its remaining employees), doubts have been cast on the studio’s ability to follow up their previous success. So how did it fare? And how appropriate is this game for your children?

Being a modern military shooter, the gameplay of Modern Warfare 3 revolves entirely around using a large variety of real weapons (including many different pistols, rifles, shotguns, heat-seeking missiles, grenades, etc.) to shoot uncountable enemies. There is blood when someone gets shot, most notably when someone is shot in the head and a good deal of blood spurts out the back, splattering on the wall or floor. Though there is no gore in the gameplay itself, some cutscenes get a bit more graphic, including a man whose arm is shot off by a high-power sniper rifle and a man getting stabbed in the neck by the player character (in the first-person perspective).

None of this either.

One scene that deserves mention is a cutscene in which a family is vacationing when a bomb goes off. This includes their little girl, who is standing right next to the truck when it explodes. There is no gore here, as everyone simply disappears into the smoke when the bomb goes off, but the developers knew the scene would be disturbing to some and clearly give the option to skip it. In terms of violence, it’s not too graphic; more on its moral and controversial nature later.

I would not personally ask a child to play this game, but I am painfully aware of the fact that the series is very popular among young teens and above.

The campaign of Modern Warfare 3 is a solid game, but the new team at Infinity Ward obviously has no idea what made its predecessors great. All of the Modern Warfare games (including this one) have been intense and well-designed, but the first Modern Warfare is a masterpiece because of its use of first-person storytelling. The most powerful example was when the game put the player in a dying protagonist’s shoes as he stumbled, out of his crashed helicopter while the ruins of a nuked city crumbled around him until he breathed his last. That was powerful use of interactivity that only video games can deliver. A similar feat was accomplished in the second game through the controversial “No Russian” level, which had reason to be so controversial, but also was a powerful and difficult emotional experience.

Modern Warfare 3 has the aforementioned shock scene with the little girl, which was both entirely unnecessary and did nothing special to make it anything more than a shock scene made for the sake of controversy. A few other attempts to tell the story well fall flat from dull presentation and misguided purpose, and the ending is anticlimactic and feels like they just copy/pasted a few elements from the previous games’ endings. Even in terms of the gameplay, the fact is that the formula is getting old. The mechanics are solid, the level design works well, and the soundtrack successfully increases the tension and atmosphere, but the heavy scripting of events and endless waves of enemies are ceasing to be exciting and starting to get a bit tedious. However, the campaign will take only about 6-8 hours to play through, so it won’t take too much of your life if you want to know how the story ends.

The multiplayer is, as expected, a solid experience. If you enjoyed the multiplayer of previous Call of Duty games, I see no reason why you wouldn’t enjoy this one as well. All the elements of leveling up, prestige, perks, classes… everything the series introduced into the multiplayer world is here and intact. There’s even a theater mode almost identical to that found in recent Halo games, letting you explore matches you played from any player’s perspective or a free-control camera.

As for a recommendation… I will leave that up to you, the parent. When it comes down to it, the lack of dismemberment and gore and the relatively PG-13 language levels make this feel like one of the more mild M-ratings out there (though it certainly did earn the rating), so if your kid wants a military shooter, you could certainly do worse. I will make this one request, though; do not let your child make this his/her one constant gaming experience as so many teens do. Video games are so much more than racking up kills over Xbox Live and shooting hordes of enemies, but recently more and more teenage gamers have gotten Call of Duty and simply not bothered with anything else. Video games have a lot to offer as both an artistic medium and a social/competitive platform; I advise against letting your child limit themselves to a single experience.