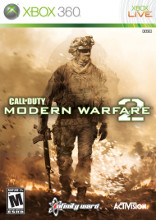 (WARNING: This review contains major story spoilers!)
Call of Duty: Modern Warfare 2 picks up 5 years after the events of the first Modern Warfare. A Russian terrorist, Vladimir Makarov, launches a terrorist attack at a Russian airport. An American soldier has infiltrated this terrorist group and in order to get closer to Makarov he must participate in the terrorist attack. Makarov is already aware that the soldier is an undercover agent and thus leaves him dead to be blamed for the event. This in turn spawns a massive conflict between Russia and the United States.

In this game the player will assume control of many different soldiers in many parts of the world. Each of the individual soldier’s stories intertwines to form a cohesive story. The game is played from a first-person perspective, which means you will be viewing the action from the eyes of the soldiers and will see their guns in front of them on the screen. The game also features many different driving segments; from manning a mounted machine gun to driving snowmobiles.

MW2 also features a new Special Ops mode that has more than 20 missions that can be played single player, or with a second player, online or off. The game also drastically expands upon the robust multiplayer modes that the first Modern Warfare offered.

MW2 features a lot of blood and violence, more so than that of the first Modern Warfare. In order to complete a level, the player will need to shoot down hundreds of enemy soldiers that will react in a very realistic manner. Blood will splatter and spray, it will also pool next to dead bodies.

There is also a lot of controversy surrounding this game, due to the aforementioned scene in which the American soldier is blamed for Makarov’s attack. This scene is actually played out as a mission in which the player participates in the attack on an international airport. The player has the choice of either viewing the attack by just following along or the player can participate in the slaughter. Either way, the player will witness hundreds of civilians that are trying to flee in absolute panic and horror. There is, however, a warning that is given at the beginning of the game saying that there is a mission that some players may find disturbing or offensive. You are then given warning when the mission is about to take place at which point you can choose to skip the mission if you so desire.

MW2 features quite a bit of bad language.

War is neither easy nor beautiful, but unfortunately it is a part of our reality. This game does have some admirable traits in the fact that it depicts men who give their all for the greater good and to secure the freedom and lives of their country men and women.

There is no doubt that Modern Warfare 2 is a brilliantly made game. Here are a couple of things that parents should consider, however, when deciding if MW2 is appropriate for their family or not. In the June 2009 issue of Game Informer magazine, Infinity Ward president Jason West said of Modern Warfare 2 that “We want to put the player in those interesting situations and have them feel what the person in that role would really feel.”1 Also in a review by David Ellis at 1UP.com, Ellis says of MW2, “The original Modern Warfare dealt with themes of life, death, action and consequences. The sequel goes after these concepts in a manner rare for the video game world; it treats its audience like an adult.”2