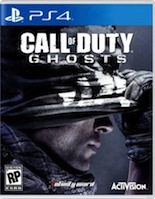 Call of Duty has grown to be a household name. Almost everyone has heard of it, and the game is played by veteran gamers and 12 year olds alike. Activision, the publisher of the game, makes an upwards of a $500 million profit in day one sales alone. Unfortunately, the franchise has gone stale, and has become repetitive. Call of Duty saturates the market with crummy knock-offs, and pushes aside better games, because it has the marketing resources it needs. This year, however, Infinity Ward, the development team behind the finest of the Call of Duty games, promised that their newest instalment would be the best one to date.

Call of Duty 4, one of the earlier games, was the game that helped revolutionize fast-paced, modern day shooters. COD4 is still deemed the best Call of Duty to date, and the series started going downhill, despite the writers. There would be the occasional thing the series did, but as a whole, it was repetitive, and underwhelming. Last year, when Ghosts was announced, gamers were given hope, as a new Academy Award winning writer was chosen to create the new story. Many had hope that Ghosts would be the best Call of Duty since COD4.

The premise of the game is that America is no longer the super power it once was. Unlike most modern war First Person Shooters, Ghosts no longer has the typical Muslim/Russian/Middle-Eastern-Extremist enemies. Now, South America begins its expansion, and tries to take over the world. They manage to take control of quite a bit of territory, and for once, someone is able to defeat us. America is bombed, and life as we know it today is radically changed. America holds the line, but as the game starts, South America pushes forward yet again. The player plays as a Special Operations soldier, who is looking for a way to change the tide of the war. He and his teammates are hopelessly outnumbered, and have “inferior” technology, but they must find a way to stop the enemy. Along the way, they encounter the Ghosts, a team more elite than the famed Seal Team 6 and Delta Force, these guys are near invincible. As the story unfolds, the person leading the South American assault is none other than an ex-Ghost, who was forced to turn on his country.

The story definitely has some flaws, but it takes on new story ideas, and mechanics, not seen in the previous games. Ghosts does contain quite a bit of mature content, and it does have an M rating for a reason.

What Parents Need to Know:

The entire game is pretty violent. There is no way to beat the game without laying waste to nary 1,000 enemy combatants. Most of this fighting is at close range, and has the player shooting the enemy with various small arms weapons, that range from a pistol, to a machine gun, to a rocket launcher. When an enemy gets shot, there will be little poofs of blood that erupt from their body. When the player gets shot, mildly gory redness will begin to cover the screen. If an enemy gets shot in the head, there will be a poof of blood behind them, and all dead enemies will have blood pool on the floor. The game also features a knife attack, which shows the player either stabbing an enemy (usually in the heart), or slitting his throat. The game also shows death during cut-scenes, but is very different than the actual gameplay. All cut-scenes are pretty black and white, and humans are either made of crystal formations, or a liquid, or smoke, only bearing resemblance to humans, rather than actually being them. During an opening cut-scene, a liquid human is gunned down by a slew of bullets, and throughout the game, scenes like that happen from time to time. The player also gains control of a variety of vehicles, from fighter jets to helicopters, which are able to fight other vehicles and infantrymen. However, there is almost no blood shown during this time, but explosions are displayed instead.

Ghosts added the new mechanic of having a military dog fight with you. The dog is incredibly lethal, sometimes even more so than the player. Most of the dog’s kills will involve the dog jumping up and tearing out an enemy’s throat, though not much gore is shown, and there is no hole in the neck if the player examines the body. The more kills the dog has, the more red will appear along his teeth and mouth.

There are some brief scenes of torture. You see at a distance a teammate getting slapped around, and later, he is found to be severely beaten. A character is shot at close range about a foot away from the player, and the player can see the hole in the body, and see the blood pooling up around him.

Every major cuss word in the English language, although there are no slang and no sexual cuss words. The F-word is used prominently once, while DA**, Bi***, Sh** are used quite often. There are a few times when the Lord’s Name is taken in vain.

Call of Duty is mostly known for its multiplayer, and that is where 95% of all players go. However, most players that have microphones are not the friendliest people. There will be the occasional friendly teammate, but most interactions involve a large string of cuss words, strung together with sexually explicit slang. If a child is to play online, the mute function is a must, as there is no limit to what other players can say.

The game is supposed to feel thematically intense, and is designed to give the player a constant adrenaline rush. The way the creators do that is they keep upping the stakes with every mission, and each mission is designed to be unique. So players will quickly go from rappelling face down a skyscraper, to playing the ultimate game of hide and seek with enemy combatants in a jungle. On top of that, there are a few moments were a “surprise” happens, or something that jumps at the player, and may give them a second of adrenaline-laced panic.

In a few of the previous Call of Duty games, there was a zombie mode, where the player killed zombies to his heart’s content. Now, there is an alien gametype. The aliens are not very frightening, but, when shot, they do spray yellow goo. They can also be set on fire, and can shoot acid out.

A Child’s Perspective: I have a cousin who has been playing this franchise since around 10 years old, and this series is the main game he plays. The game is very entertaining to play, and for most, it is their first introduction to shooting games, and is the premier game to play. Most of the younger players I know are not put off by the language, or the occasional scary scene (some Call of Duties have a Zombie mode, but not this one), and quickly lose tens of hours to the game.

Despite having an award-winning author, Call of Duty continues on with the same old formula it is used to. Despite being the “underdogs” the Ghosts have access to advanced equipment, and always feel like they are more prepared than anyone else. The story was underwhelming, but at this point I expected that. It did have the best opening scene of the series, and the ending came as a (good) surprise. Infinity Ward did try to do a lot different mechanically in the story, so that is the one thing new about the game.

The multiplayer mode has undergone the most change since Call of Duty 4. They completely overhauled the customization system, and added a few new mechanics to the game. A new alien mode was added, and is pretty fun, especially with three of your friends, but it is very hard. It is fresh and fast paced; it has a chaotic feel to it.

I would recommend that parents play the game before they let their children play it. When I first wanted to play Call of Duty (as all my friends my age were playing it), I sat down with my dad, and we played multiplayer together. He then deemed I was mature enough to play it.

I equate this game to a PG-13 movie, but one that is targeted for those in the upper teens, rather than those who have just become teenagers. If a child is mature enough to handle an action-packed PG-13 movie, and understands the difference between what happens in a game, and what happens outside the game, then they are probably mature enough to play COD. 13-15 years is around the age I would deem appropriate to play this game, but that really depends on their maturity level and the level of understanding that child possesses… and of course this is up to the parents’ discretion.