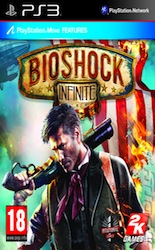 Bioshock Infinite is a First Person Shooter in which gamers play as a man named Booker DeWitt. The year is 1912 and Booker has been given a simple charge “Bring us the girl and wipe away the debt.” The part that is not so simple is that the girl, Elizabeth, is being held captive in the city of Columbia, a city which floats above the clouds. As Booker, the player must rescue the girl, escape the city of Columbia, and put an end to the leader of Columbia, a man named Father Zachary Hale Comstock. Comstock claims to be God’s Prophet to usher in the people of Columbia to a utopia in the sky. Booker’s task will not be easy; as Comstock has soldiers who will attempt to stop him along the way. Add in some other characters who are also trying to gain power in the city such as industrialist tycoon, Jeremiah Fink, and a group of rebels called the Vox Populi, and you have all the elements to create what will surely be a top contender for the 2013 Game of the Year. But is it right for your family?

The player will be able to use a variety of guns against enemies. Some enemies are mechanical, but many of the enemies are flesh and blood, and when they bleed, the blood will splatter.

The player can acquire various powers such as the ability to throw fire, lightning, or even murderous crows from their hands to attack enemies. These powers are deadly enough on their own, but when combined with other attacks can create some gruesome effects. For example, if I were to cast lightning on an enemy and then pelt him with bullets, his head may explode.

One item the player can use is a skyhook which allows the player to glide on monorails. The skyhook can also be used as a weapon. One scene in the game shows the skyhook going into a man’s head.

In some areas, the player is required to fight and kill the city’s police and armed forces.

There is a scene where a man is tied up and attacked by crows.

There is a scene where a woman dressed as a nun catches herself on fire and attempts to kill you.

There is a fair amount of bad language in Bioshock Infinite, but not as much as what I expected in an M rated game of this nature. The bad language that was primarily used was s**t, hell, damn, and various misuses of the name of God.

The city of Columbia is very much a White Man’s city and ethnic cleansing is a common theme, although it is portrayed to the player as something evil. The player will encounter quite a few racial slurs in the game, both from the citizens of Columbia, and from propaganda that is posted around the city. The player will encounter racial slurs against Blacks, Native-Americans, and Irish. In fact, at one point in the game the player will be asked to throw a baseball at an interracial couple for being caught together, although the player can refuse and will be rewarded later in the game for refusing.

According to the ESRB there is some mild sexual dialog in the game, but nothing stands out in my memory.

There is one area that is called the Hall of Heroes, and the word heroes has been crossed out and replaced by the word whores.

Spirituality plays a large part in Bioshock Infinite, but not in a very positive way.

The player encounters and must participate in a baptism service were he must be baptized in the name of the Prophet, the Founders, and the Lord, to enter the city.

The main antagonist, Father Zachary Hale Comstock, claims to be a Prophet of God. His message and propaganda is spread around the city.

Comstock has made the people of Columbia believe that Booker is a False Prophet and must be stopped at any cost.

In one area of the game, the player has to fight with ghost like beings (they may be people from another dimension.)

Anytime the player acquires a power, a short slideshow is shown with a man using the power to fight off little devil creatures.

One power the player can acquire is called Possession which allows the player to turn enemy soldiers on one another.

In one area of the city, the player encounters an idol of Buddha, Elizabeth explains to Booker who Buddha is.

Major Spoiler, stop reading if you don’t want to know part of the ending: Baptism also plays a key part towards the end of the game. We come to find out that Booker and Comstock are the same person, but from two different realities. In the one reality Booker gets baptized, finds religion and becomes Comstock. In the other reality, Booker chooses not to be baptized and continues his life as Booker.

The player can consume alcoholic drinks; consume too many and the screen becomes blurry.

One area of the city has a monument to John Booth for killing Abraham Lincoln.

I think Bioshock Infinite in many ways is a brilliant game. The setting of the city in the sky is beautiful, the game mechanics were extremely polished, and I am confident people in the gaming community will be discussing the story, especially the ending, for many years to come. The one thing I did not like about this game is that I personally felt that it showed the path of religion leads to a path of power which ultimately corrupts. And while history has shown that many hate groups have used God and religion to justify their actions, I wish the game had shown some counterbalance because not everyone who chooses to follow God is a white supremacist. Regardless though of how you interpret the ending, because of the amount of violence I would highly recommend parents to respect the M rating and understand that Bioshock Infinite is a Mature Game meant for Mature Players.