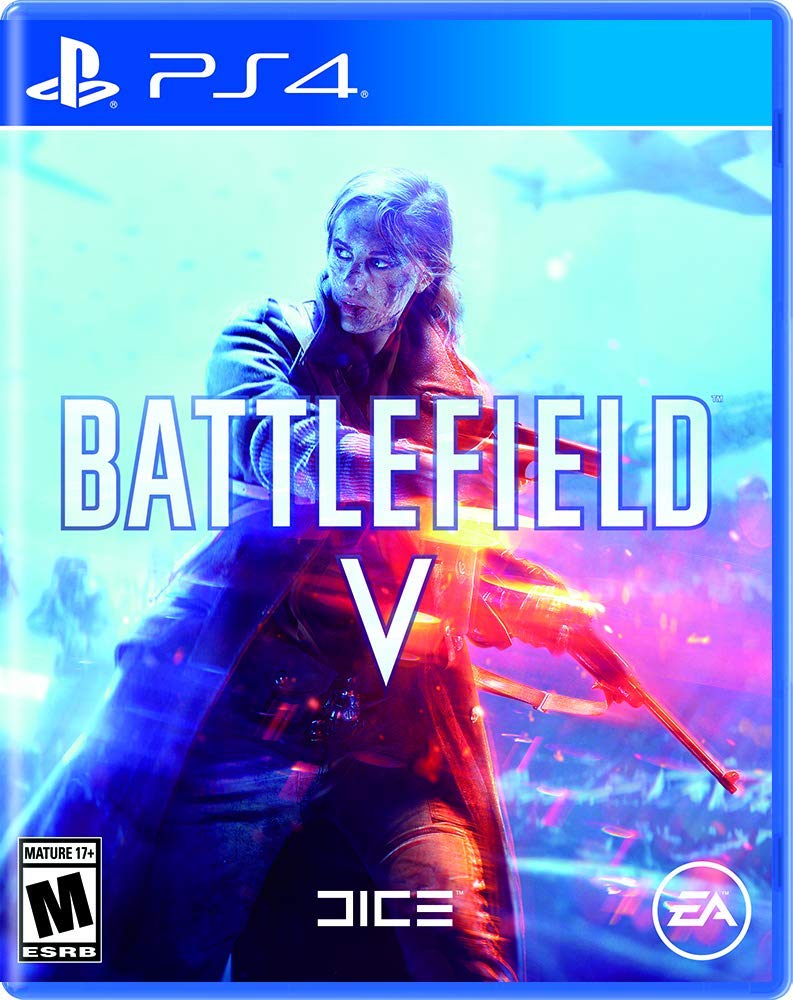 Game Description:
The Battlefield series is one of the old shooters. A king of the genre back when World War II was the most popular setting for shooter games. Since then, however, Halo moved the shooter genre into space, and Call of Duty: Modern Warfare moved it into the modern day. Battlefield, meanwhile, has experimented with lighthearted action comedies and urban police warfare. But they only seemed to really find thier identity with the release of Battlefield 1, which returned to a historical setting by telling a series of stories set during World War I.

Now, Battlefield V returns to World War II with a new set of story missions and the classic Battlefield multiplayer modes. Players dive into the war through the eyes of various participants; they can play through a variety of stories that highlight various aspects of the war, or can go online to take part in huge battles with dozens of other players.

Of course, a depiction of history’s biggest, most infamous war isn’t going to be all rainbows and sunshine. So let’s see how this game stacks up for your children.

Violence:
The in-game violence is realistic, but not overly graphic. The player uses a variety of weapons to kill human enemies. Bullet wounds are punctuated with splatters of blood. The player can also sneak up on enemies and kill them silently with a knife, which depicts men being stabbed in the neck right in front of the player’s face.

In cutscenes, characters are sometimes depicted on the ground with blood on them from wounds. In another scene, German soldiers are seen hanging with signs that say “deserter” on them in German.

Miscellaneous:
One mission takes place from the perspective of a Nazi tank commander. This mission absolutely does not condone the actions of the Nazis.

Positive Elements:
The stories in Battlefield V’s single-player missions highlight positive values such as selflessness and sacrifice. They also reveal the folly of other values, such as blind dedication to a leader or nation in the face of moral corruption. One mission even addresses the erasure of black soldiers from France’s war efforts. There are many positive lessons to take away from these missions.

Reviewers Thoughts:
Battlefield V is a mixed bag for me. Mainly because, honestly, the “realistic shooter” genre has bored me for a long time now. And not only does Battlefield V follow the gameplay blueprint for the genre to a T, the one area where it does diverge–in occasional open-world segments where the player must complete objectives spread around a large area–don’t work very well. It feels like it wants to replicate the feeling of other open-world shooters like Far Cry, but the constraints of the realistic setting and the gameplay built for action over stealth don’t do these segments any favors. The game is at its best when the single-player missions are tightly-directed, and when playing the expansive multiplayer battles.

When the single-player missions are on, they do very well. As of the time of writing, there are four of them; the first is a pretty typical “prevailing against all odds” story, but the other three are real standouts. The story of black soldiers defending France, and their desperate drive to prove themselves in a society that valued them less than the white soldiers, was compelling and tragic. Similarly, the story of a German tank commander admitting the immorality of his participation in the Nazi cause through a story of blind nationalism and fanatical extremism is probably the most moving storytelling I’ve seen in the historical shooter genre.

And meanwhile, the multiplayer is fun as always. Large battlefields, a variety of game modes, and lots of vehicular options ensure lots of potential for playtime. I wish I had more to say about it, but honestly it’s pretty normal at this point. Good, well-made, but normal for its genre. Unless your kid is the type to get into the balance of all the guns and abilities and vehicles, this multiplayer mode is pretty much just business as usual. Good, but nothing special.

If your children enjoy shooters like Call of Duty and previous Battlefield games, they’ll probably enjoy this one too. For that matter, if they play those games, there’s nothing in Battlefield V that will be too mature or intense for them to handle. If anything, the single-player missions will give them a lot more to think about than any recent Call of Duty game has. If your child is a shooter fan, it very well may be worth a purchase.