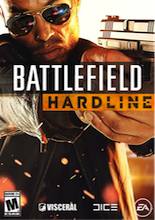 This is what is so fun about Battlefield: Hardline, being the first game in the franchise where you play as a cop.

In this game, you play as Detective Nick Mendoza, a Cuban immigrant who serves as a Miami cop in the middle of a very violent drug war in the city. The first half of the game has Nick and his partner, Khai Dao, focus their efforts on stopping the drug cartels, but they soon uncover some dirty cops in the force, and Nick himself is framed for crimes he didn’t commit. Three years later, Nick escapes from the prison transit (a la’ The Fugitive style), and forges an uneasy alliance with a few criminals, so he can bring the corrupt cops’ illegal operations down, and get revenge.

Should you protect or serve your children this game? Hopefully, this review will help you with that decision.

Blood spurts from enemies, and enemies lie in puddle of blood when killed. There are a few car chases, where cars can be wrecked in hot pursuit, damage is shown. One level involved a truck attempting to run over a vehicle with YOU in it. One crook is arrested just after he’s been in an accident, blood streaming down his face. One of Nick’s allied is injured in a bomb explosion, but is saved by his flak vest. We see him covered in blood, and with bloodshot eyes. A girl is shot in the arm and breaks her leg in a car accident, blood shown. When arresting suspects, you roughly apprehend them, and pin them to the ground. One character is shot in the arm; blood smears the wall and sprays her face as she slumps, leading to a mini game where you have to put pressure on the wound. An unarmed man is shot at point blank, blood splattering the window behind him.

One crook is punched in the face and repeatedly bashed around with a wastebasket. Nick is attacked by an alligator, where you have to wrestle it, followed by Khai stabbing it through the brain, blood spurts. In one level, you can find some rotting alligator skins and a human corpse whose arms and legs have been chomped off is found hanging. One level has what seems to be a torture chair with blood stains around it.

In one level, there are corpses lying in blood covered with crime scene blankets scattered throughout the warehouse. One guard says he wants to shoot a guy in the head, and watch it roll off, which is an obvious nod to the violent nature of the M-rated shooter genre.

Just about every single character in this game cusses up a storm, thanks to Battlefield’s war game nature. Frequent uses of f**k, s**t, one use of c**ksucker, w**g, t*twizards, d*****bag, two uses of p***k, frequent misuses of God’s name, and frequent mild profanities. One character makes an obscene gesture.

Some of the criminals’ rap music may have suggestive or seedy lyrics, but you’d have to be listening very hard to pick up what their singing. Since most of this game revolves around the Miami drug war, expect plenty of slang words for drugs.

In the multiplayer, it is possible to hear unfiltered language from both different players, and possibly written-in profanity from their avatars.

Some characters or bystanders wear bathing suits or short shorts. One woman wears short shorts and bares a little bit of midriff. A few posters, books, or advertisements may feature some women in bathing suits, cleavage-baring dresses or lingerie.

In the billionaire’s mansion, there is some suggestive artwork and sculptures.

One crook quips about some mobster having a hot wife, and calls a female cop “sexy.” Nick makes a “don’t ask, don’t tell” pass.

Some graffiti depicts demonic looking characters. In Episode 1, one bystander quips, “My body is my temple.”

Khai says she studied Krav Maga, but calls karate “mystical bulls**t”. One level has a painting of Buddha.

In an inmate transfer bus, one inmate attempts to sing, Amazing Grace, but a guard tries to shut him up.

While lethal force is an option, this game rewards you for arresting enemies instead of killing them, but that doesn’t mean it is possible to play the entire game without killing a single enemy. If you are spotted by enemies, especially if you are arresting their comrades, they will shoot you on sight, and you will have to shoot back (you can tase in the heat of battle, but taser ammo is low.)

Crates and packets of narcotics can be found in some levels, but you can’t consume them yourself, though you can see some criminals snort it. One level takes place in a meth lab, where cannabis bushes are grown.

One funny scene has some drug dealer trying to escape with six tons of coke, which his partners try to stop him, before they all barely escape from an incoming train. The next scene has the three guys walk in, covered in white powder.

The main villain says there is no such thing as good guys.

Nick and his late father were estranged for twenty years, and Nick even says his dad being dead is fine by him. Turns out his dad was Cuban Secret Police, who tortured prisoners. That’s why Nick became a cop, a real cop. Khai confesses to wanting to ruin the main antagonist, but is perfectly fine with killing another corrupt cop.

Two characters admit to having fallen in love over each other, but ran away without the girl’s dad’s consent. Her dad and his henchmen are actually pretty racist, not to mention he’s an ex-military, illegal gun-toting patriot gone bad (he’s got just about every weapon illegal for civilians to possess). No wonder his daughter is pretty disrespectful to him.

Khai and Nick disobey a direct order from a superior, when they rush into a drug dealer’s hideout. Khai beats up a criminal, for no good reason, though Nick and the police chief reprimand her for it. Two members on the police force are corrupt. Some characters drink alcohol.

SPOILERS: The game is called Hardline for a reason. After Nick escapes from the cops, he has to do some illegal activity such as breaking into a car dealership, breaking into some billionaire’s home, stealing a car, and stealing (and using) a safecracker to thwart the main villain’s plans. Near the end, you’re forced to shoot a corrupt cop, but only in defense of your partner. In the end, Nick comes to terms with the fact that he’s more criminal than cop, and sadly gives in to it by murdering in cold blood the man who ruined his life, though the player isn’t the one pulling the trigger.

In multiplayer, it is possible to play the criminals, where you can beat up hostages wearing bags on their heads, but you can’t kill them. Of course, the real controversy is killing cops in multiplayer when playing as criminals.

A Child’s Perspective: As an adult gamer, I wasn’t terribly bothered by the violence, drugs, and language, but the game is still just as inappropriate for kids all the same. I would only recommend this game to adults, and adults only.

Battlefield: Hardline has no equal in the cops-and-robbers gaming mark, and it is very well designed. I have to say, it is probably “the best TV show I’ve ever played,” but I still have mixed feelings about it. In spite of the game’s pros, I was sadly disappointed in how the single-player campaign ended, and it does raise concerns to what the game is teaching players about law enforcement and crime. What disturbs me most is how the game seems to treat the war on drugs as a losing battle.

Still, compared to games like Grand Theft Auto, Battlefield: Hardline is a better alternative, especially if you want to play as a cop. If you think you are mature enough to handle the violence, language, and drug content, and have a good strong moral compass, then this game would probably suit you, but I would consider renting it first before deciding you like it well enough to own or not.