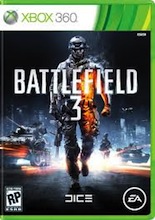 Battlefield 3 is a realistic first person shooter in the vein of games like Call Of Duty: Modern Warfare. Players take part in a conflict that spans around the globe. All forms of military action from melee combat and firefights to large scale warfare with tanks and jets.

Campaign: The game’s campaign takes place in the year 2014. Near the beginning you will be part of the US Marine Corps fighting against the People’s Liberation and Resistance (PLR) near the Iraq-Iran border. Later missions take place in northern Iran, Paris, and the subways of New York. The campaign is a single-player affair and will last around 6 hours.

Cooperative: Features two players in stand-alone missions. There are various missions that will task the players to work together; some missions involve using helicopters and tanks. You can unlock additional weapons for multiplayer by achieving certain scores.

Multiplayer: The multiplayer is two teams of 12 players fighting against each other. There are two primary types of games. In the Conquest game mode, each team is vying for control of 3-5 flags. Whichever team holds the most flags will cause the other team to bleed tickets. The game ends when one team runs out of tickets. The other mode, Rush, has one team defending and one team attacking trying to blow up M-com stations that are in various places on the map. Once a set of M-com stations have been blown another set is revealed in which both teams must scramble to defend or attack. The game is over when either all objectives are destroyed by the attacking team, or the attacking team runs out of tickets.

There are 4 classes in multiplayer and the best aspect of this game is that it really encourages teamwork, more so than most First Person Shooters (FPS). The four classes are; Soldier, who can heal and revive teammates. Engineer, who can blow up tanks and vehicles, as well as repair them. Support, who can give ammunition and provide mortar fire, and lastly Recon, which is a sniping class.

(The following sections are meant to be informative only. Do not act disgusted or offended in your remarks by the games content. The purpose of our reviews is to inform parents, not to push our personal convictions on parents, but to inform you of the content so that you can decide what is best for your family.)

Battlefield 3 is rated M for mature and features blood that will spray from bullet impacts and characters writhe realistically when they die. Also, there are several disturbing scenes, including a nuclear blast, a terrorist execution, and a battle with police that the player has to kill in order to avoid a greater tragedy.

Profanity typical of a Rated “R” movie is used throughout including the more serious four letter words.

The only positive element I can say is the teamwork that cooperative and multiplayer require in order to be successful, however the depictions of violence and pervasive language are matters that should not be considered lightly when deciding to allow this into your home or not.