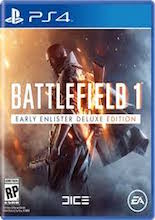 Shooter games have undergone a number of transitions in the few decades since their inception. Wolfenstein 3D and Doom kicked off the genre with sci-fi and fantasy settings. Eventually, games like Medal of Honor grounded the genre a bit with World War II games. Halo came along to catapult shooters back into sci-fi territory before Call of Duty 4 brought it into modern military settings, and it’s been slowly creeping back toward science fiction ever since.

EA’s Battlefield franchise has struggled to find its identity in that time, starting off in World War II multiplayer games, branching out into comedic modern conflict with Bad Company, and going through an unfortunate phase of unsuccessfully trying to copy Call of Duty’s formula. Fortunately, they eventually did decide to branch out and do something video games have rarely done: World War I.

Battlefield 1 consists of two main modes: a multiplayer mode that features giant, 64-player online battles, and a single-player campaign that has five separate stories about various conflicts around the globe. The game generally tries to mix the fast-paced, action-packed style of military shooter games with the grounded, tragic setting of World War 1, to varying degrees of success.

So then, let’s talk about what you may or may not want your kid to see.

Violence:
Being a shooter based on a real war, players will be killing a whole lot of other people. This mostly takes place in the first-person perspective, aiming down the sights of a weapon to eliminate enemies in a frantic warzone. Some missions are also based on stealth, and will have the player trying to sneak past or quietly take out their enemies. Either way, the player will use a variety of guns to shoot countless enemies, and explosives to destroy vehicles or groups of soldiers. They can also use knives for quick melee attacks or silent stealth kills. Blood is visible when enemies are shot, stabbed, or otherwise killed, but no dismemberment or gore is shown.

Players can also control vehicles like tanks and planes. Such vehicles explode bloodlessly when destroyed.

Language:
Strong language such as the F-word and the S-word, along with various lesser expletives, are used throughout the single-player campaign. In the online multiplayer, the only dialogue will come from fellow players (you can control this with your system’s parental controls).

Miscellaneous:
World War I was a dark, dirty conflict, and this game is built to show it. So while the violence isn’t graphic in nature, the whole game definitely feels visceral and dark.

Reviewers Thoughts:
Modern shooters, with very rare exception, portray war as glorious and noble rather than dirty and horrible. It’s an understandable distinction; there’s certainly precedent in our history for portraying war in this way, and it would make little sense to give the player something as un-fun and harrowing as realistic war and say, “Here, have fun!”

Battlefield 1 is about one of the most tragically pointless conflicts in modern history, so the fast-paced power fantasy design of modern shooters isn’t the most appropriate form of interacting with its events. Battlefield 1 tries really hard to overcome this inherent dissonance and it actually succeeds far more than I would have guessed. The decision to split the campaign into five short stories was inspired, granting a variety of perspectives to the conflict and allowing a good balance of both tragedy and heroism to show through. The game’s opening moments, as you hop around the battlefield to new perspectives as the characters you’re controlling die, is one of the more powerful moments of any shooter I’ve played in quite some time.

The multiplayer also tries to grant this feeling to some extent; the sheer size of the maps and scope of the conflicts give a feeling of powerlessness that doesn’t exist in most multiplayer shooters. But ultimately it doesn’t do much to shake up the formula, and it ends up feeling like little more than it is at its core: a fast, huge struggle to play better than everyone on the other team. But it is quite enjoyable, and someone with a lot of friends on the game could band together and have a really good time.

Overall, Battlefield 1 left more of an impression on me than most games of its genre with its emphasis on the dark, helpless feeling of conflict over the all-too-common power fantasy of playing soldier. If your kid likes war games, and they’re mature enough to deal with the dark tone, violent gameplay, and strong language, this is one of the better choices you could go with.