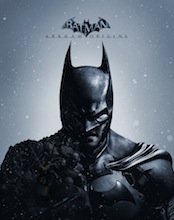 Batman: Arkham Origins is the third installment in a great series of games. Arkham Origins is meant to be a prequel and takes place a few years before the events of Arkham Asylum. Batman, the young crime fighter, finds out there is a bounty placed on him by Black Mask which draws eight different assassin’s out to try and kill him on Christmas Eve. The game uses a third-person perspective that focuses on Batman’s fighting and crime solving abilities to further the story. You are able to fly and grapple around a huge open world city with many side missions to do, crimes to solve, and thugs to beat up.

There is a new multi-player mode as well that allows you to play as either Bane’s thugs, Joker’s thugs, or Batman and Robin. You even get to call in the ultimate reinforcement to help win the match by playing as The Joker or Bane themselves.

I could make this review short and just tell you to read the other reviews on this website from the other two games in the series (Arkham Asylum and Arkham City) because this game is pretty much exactly the same, but I won’t.

That being said if you’ve played the other two games then you know exactly what to expect in this one.

The game has a whole lot of PG-13 violence. Batman never kills anyone, he only knocks them unconscious by beating everyone senseless. This seems a bit disturbing at times when you have to beat up the police because they don’t know that he’s on their side yet. It does seem like Batman beats people up more than you would think the real Batman would. Not that there’s a real Batman… oh you know what I mean.

The villains in the game however do kill people and there are a few instances where Batman is not able to save them. So I would say that some of the scenes would be a little intense for younger viewers. There is some blood shown including blood splatters at crime scenes. The Batman character seems a little more violent and disturbed than he is in the other games in my opinion.

This is one of those games that you can play for a while and not hear any bad language and then all of the sudden you get a barrage of it. A lot of the language comes from the dialogue of the thugs you hear in the background and in some of the cut scenes. There are several uses Of ‘B***h’, ‘A**’, ‘Bas***d’, ’D**n’, ‘H*ll’ and there is even some bad language in Spanish which, according to Google, wasn’t all that bad.

There are a few female characters in the game that have tight or revealing clothing. We don’t see the Bruce Wayne millionaire playboy side of Batman which means the sexuality in this game is at a minimum. It’s worth noting that there is a “Live Nudes” sign on one of the buildings in the game but unlike Grand Theft Auto 5, you can’t actually enter the building or see what the sign advertises.

Some of the characters can be seen smoking. There are a few characters who drink as well. Batman destroys illegal drugs so that could maybe be seen as positive.

Shortly before this game came out I had a good friend of mine insist that I borrow the first two games in the series from him. I was pretty skeptical at first because I wasn’t sure I would like this type of game, but I ended up really having a fun time playing them. So in the past month I’ve played all three games in a short amount time, cramming it all in for this review. So here are my thoughts…

If Arkham Origins was the only game in the series that I’ve played I would love it. The graphics are really amazing, especially all the time they must have put into the incredibly detailed backgrounds. Sometimes I just had Batman stare at the walls and look around at everything because I was in awe of the detail in the environment. The gameplay is so immersive. You get started out with one mission to try and save someone on the map and then get side tracked ten times on the way there by a relay to destroy, a crime in progress to thwart, back talking thugs to beat up, or one of the Riddler’s puzzles to solve. And then I’d be like, ok what was I doing again?

The story line is pretty decent with good voice acting from a huge cast of classic Batman characters. The fighting mechanic is really cool and it’s a lot of fun being the Dark Knight and putting an end to evil in Gotham City.

All in all it’s a great game on it’s own if it weren’t for the fact that I’ve played the other two games in the series which are a lot better. Arkham Origins doesn’t add enough good to the game to out weigh the good that was removed from the game. The story is not nearly as good as Arkham Asylum. The voice acting is not nearly as good in comparison to the previous games. Mark Hamil’s voice of the Joker cannot be replaced, it’s iconic. I was more annoyed or bored at the voice acting than anything else. Especially the dumb things the thugs say while you beat them up. Because of the title I was hoping to see more of the origin of Batman or the Joker or Arkham but none of that takes place. One really strange part to the game is that the city is totally empty and lifeless aside from the thugs or corrupt cops. It’s almost like they spent a ton of time on the scenery but didn’t put any life in it which makes it seem fake. I wish there was some innocent bystanders to save or something.

I’m not even going to mention the game crashing because I’m sure they’ll fix it eventually, but it’s really annoying.

The new multi-player mode is fun at first but I can’t imagine playing it for too long. Plus it’s near impossible to find anyone else online who’s playing it so just stick to the story mode.

I’m not saying I didn’t enjoy playing this game because I certainly did. The game has a great formula that has worked really well for the first two games. There’s just not enough added content to keep me from going back to Arkham City to get the rest of the achievements.

From a parent’s perspective, there is the element of fighting crime and never killing anyone which makes Batman a positive role model. The overall game is pretty dark in tone and some of the characters could be scary like Killer Croc. I would say that the provocative female characters, the thug language, and the literally endless amount of beatings in the game are more than enough for me to say “Yeah, not this game kids. Let’s wait till middle school at least.”