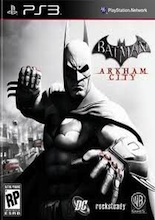 Batman: Arkham City is the sequel to the popular Arkham Asylum from 2010. The game takes place about one year after the events of Arkham Asylum where a portion of Gotham City has been turned into a prison city for the super-criminals that make up the Batman Universe. The prison is supervised by Hugo Strange, a doctor who claims to know Batman’s true identity as Bruce Wayne. In order to determine Strange’s true motivation for creating Arkham City, Bruce Wayne allows himself to be arrested and thrown into Arkham City.

Arkham City is a game that Batman fans will love. From the very beginning, you are given all the skills of Batman, and very quickly the player feels like the caped crusader himself. The game creators took the formula from the previous title and perfected it in almost every way. As the player explores Arkham City, the game rewards you for creativity with how you dispatch villains, and the animations of Batman flow from one bad guy to the next and are more fluid than any game this reviewer has played. Also, purchasing Arkham City comes with a download code to unlock Catwoman as a playable character who comes with her own weapons and side missions to complete.

Along with the main campaign, Arkham City contains a plethora of unlockable content from concept art, character models, and special challenge maps. The challenge maps encourage players to hone their skills even further by completing tasks of stealth and speed.

Violence
Beat’em up violence is the primary aspect of Arkham City’s gameplay. Batman’s main method of taking down enemies is through the use of his fists, feet, and elbows. There is very little blood when Batman is beating bad guys to a pulp, but beyond that, the fistfights are very realistic and Batman flows his attacks smoothly from one enemy to the next. Along with his fists, Batman also uses a wide variety of gadgets including an electrogun that stuns enemies, batarangs, explosive gel, and others. Though even with all of these gadgets, Batman only stuns and incapacitates, he never kills.

Other than Batman inflicting pain, there is a fair amount of violent content in Arkham City. Batman will investigate murders of a gruesome nature. Some enemies will carry guns. There are also areas of Arkham City that have blood splattered on walls. During some cut-scenes, characters will have bloodstains on their face or other areas of their body.

There is a fair amount of language in Arkham City. Words like d–m, b—ch, a–, bas—d, and sh-t can be heard from the numerous gang members that roam the streets and during cut-scenes. There are also instances of god
d–m. A majority of the language encountered will occur while the player is travelling from one location to another in Arkham City and will simply overhear thugs conversing with each other.

There are numerous sexual references and themes in Arkham City:

There are only two pieces of spiritual content that are of note:

There are some instances where drugs and alcohol are referenced by thugs on the street, but there is no overt drinking or drug use.

Personally, being a fan of this games predecessor, I found Arkham City to be one of my favorite games to come out this year. The gameplay is refined, polished, and truly accomplishes its goal of making the player feel like they are in complete control of Batman. Also, I found the voice acting and music in this game to be one of its shining points beyond the gameplay, which for me, adds more to the experience than anything else. That being said, as it is with any other game that comes with a mature rating, Arkham City is not designed for children. The aforementioned content in the game should be considered when deciding if Arkham City fits into your family’s standards for entertainment.