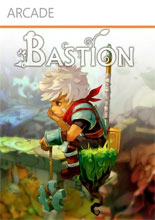 Bastion follows the exploits of “The Kid,” a nameless youth from the kingdom of Caelondia who awakes in his bed to find that his world has been destroyed by what is known as “The Calamity.” After fighting through the first level of the game, The Kid finds his way to the Bastion, the safe haven where all those of Caelondia were supposed to retreat when disaster struck. Unfortunately for him, all he finds is an old man named Rucks, the only other survivor from the kingdom of Caelondia. Rucks tells The Kid that he must go out into the now destroyed world and find remnants of Caelondia’s former glory in order to build up the Bastion and begin a new life.

Bastion is technically a roleplaying game (RPG) with players gaining experience and levels by dispatching foes, but instead of an open world to explore, The Kid travels to levels that he can only visit and go through one time. Increasing in levels only provides increases to health and attack strength. Any upgrades to weapons or equipment must be obtained by finding new weapons in the world and then acquiring upgrade materials for those weapons during the game.

The storytelling of the game is given by the voice of Rucks. Rucks acts as the games omniscient narrator who provides the story while the player works his/her way through the levels. The narration is done in such a way as to give the player the sense that the story is being told as it is occurring. As such, the narrator will say specific things, depending on what the player decides to do moment by moment.

The violence in Bastion is typical of a basic hack-and-slash game. However, there is no blood or gore to speak of in this game. The Kid obtains various melee and ranged weapons throughout the game that he uses on ghouls, birds, and other fantastical creatures. When these foes die, they typically disappear with a “poof” or they fall over unconscious. Upgrading weapons generally increases the range of the weapon, improves the firing rate of the weapon, or adds other various effects.

There is no obscene language in Bastion.

There is no sexual content to speak of in Bastion.

In Bastion, the player will eventually gain the ability to build a Shrine in the Bastion, which allows the player to invoke the “gods” of the world of Bastion. Doing so increases the difficulty of the game in some fashion, but also gives the player an experience bonus as long as the deity is invoked. Invoking multiple deities will cause experience bonuses to stack upon each other. Beyond this, there are no references to any spiritually charged topics.

In Bastion, there are instances of alcohol and tobacco use. During the game, The Kid can choose to build a distillery, which allows him to consume various alcoholic drinks that give the player stats bonuses. The drinks have clearly fictitious names like “Werewhiskey” and “Bastion Bourbon” and the player never “sees” The Kid drink any of the beverages, but the narrator will offer a description of the drink as The Kid leaves the distillery.

Regarding the tobacco use, there is a point in the game when The Kid will have access to a hookah. When The Kid uses the hookah, he will pass out, taking him to an endurance trial level in order to gain extra experience and the player will learn The Kid’s back story.

For a downloadable game on Xbox Live, I thoroughly enjoyed this game. Most downloadable games only provide an hour or so of entertainment, but Bastion occupied my attention for about 5-8 hours. The gameplay is very satisfying. I actually played the game through twice before I felt like the gameplay had lost its luster for me. In addition to good gameplay, Bastion has music that is second to none in downloadable games. The only qualm I had with the game was the narration. It felt interesting and unique at the start, but by the end, it felt more like a broken record. I would recommend this game for families looking for a cheaper game (Only $15 on Xbox Live), but would recommend that parents try the demo first to see if the gameplay is appropriate for their family’s entertainment guidelines.