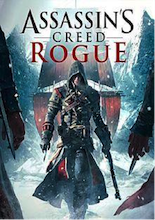 In this game, Shay grows disillusioned with the Assassin order, as their methods and cause have proven to be less noble than he believed. The Assassins and Templars are both trying to retrieve some ancient artifacts codenamed Pieces of Eden, belonging to the ancient primeval civilization, the Precursors. Shay attempts to reclaim a Piece of Eden, but triggers an earthquake in Lisbon, Portugal as a result, claiming hundreds of lives. Outraged, he leaves the Assassins and is nearly killed, but is rescued by the Templars who welcome him into their ranks. Now a Templar, Shay must hunt down the Assassins he once called friend, and put an end to their twisted crusade.

(Note: This review is based mainly on the Main campaign, and may not include details from side missions)

It is possible to disable the blood, but it is realistic nonetheless. Some levels include blood trails on the ground. On the main menu, if you wait long enough, there is a teaser shown which has Shay shoot an Assassin off-screen. One mission requires you to rescue a man from hanging. A fistfight spews some realistic blood in a cutscene. Blood spurts when you or enemies are hit. Muskets and swords kill some people; which sprays blood (once on the screen). One mission at the beginning requires you to murder a dying Templar target. You can use air guns to take down enemies the non-lethal way, but they will wake up shortly or use smoke bombs to daze them and escape or kill them. When aboard Shay’s ship, the Morrigan, you can sink ships with cannons, guns, ice rams, and burning oil.

You can kill animals and skin them for resources, leaving their bloody remains afterward. There is a mini-game where you and your crew can hunt for whales by harpooning them to death. Water around the animal turns red when wounded, and if hunted successfully, the dead whale can be seen bleeding and covered with wounds.

One Templar leader kills an Assassin after interrogating him, blood sprays on Shay’s cheek. Shay and another man fall off an icy cliff, with Shay luckily surviving and the other man dying in a puddle of blood next to him, his face bleeding as well.

At one point the Assassin is shot in the leg, blood sprays on the snow as a result.

There are only two or more uses of f**k, one use of p***k, and infrequent uses of s**t, but only in the modern day levels. Mild profanities are infrequent and can mostly be heard in the Animus. One Templar in the modern world always calls the player a “numbskull.”

Some of the female Assassins wear outfits that expose their hosiery-clad legs.

Shay mentions how the girls in Havana have no shame in flaunting their lusty buttocks, and the girls in London were destined for the convent but only spoke Portuguese, not that they spent much of their time talking. Shay and another Templar make a passing reference to King Louis and his mistress. Some of the figureheads you can equip on the Morrigan feature topless women (including a sexual demon called a succubus) but with very little detail. Some of the sea shanties sung by the crew of the Morrigan include suggestive lyrics.

When Shay is in Paris, some couples can be seen embracing each other.

When Shay is an Assassin, he participates in several missions that revolve around reclaiming the Pieces of Eden from the Templars. Those artifacts are said to have existed before Adam and Eve and have been known to deceive those who wield them. Templars chant, ‘May the Father of Understanding guide us,’ as Shay is sworn into the Templar ranks. Shay utters those words in the ending cutscene.

In one Assassin mission, Shay says, “Even the devil can quote Scripture to suit his own purposes,” to a Templar he’s just murdered.

One mission involves Shay locating a Precursor Temple that lies beneath a cathedral in Lisbon, Portugal. Masonic emblems can be seen in the cathedral. Shay’s intrusion into the temple causes a massive earthquake in Lisbon, killing hundreds of innocents. Someone asks how could God do this to them, which Shay refutes by saying, “God had nothing to do with this.” Shay constantly retorts, “I make my own luck,” every time someone wishes him luck.

A dying man says that Hell welcomes traitors like him, and his killer says he’ll go there proudly knowing he’s done right.

Many of the sailor shanties include lyrics about alcohol and getting drunk. Some characters drink wine or rum. You can collect tobacco cargo from the sea, besieged ships, or forts and sell it for money.

Spoilers: Shay is disrespectful to his Assassin superiors, before his betrayal. In the first beginning chapters of the game, killing civilians will result in desynchronization, but when Shay joins the Templars, killing civilians will result in bounty hunters hounding him. One mission requires Shay to commit a serious crime to frame the Assassins and turn the authorities against them. The Templars in Shay’s time and nowadays may seem to have more noble causes than the Assassins, but they still believe freedom is too dangerous for man to be trusted with, and instead want Order.

Shay finds himself killing many of the Assassin leaders, including a woman and a man he was very close friends with. Despite his enmity with his old mentors, Shay begs them not to force him into killing them, but they reject his pity. This makes Shay more of a conflicted hero instead of a villain who betrays and murders his old friends out of hatred.

The Assassin’s Creed games have recently been one of my favorite gaming franchises to date, though I particularly do not agree with everything it teaches. Despite the messages of its predecessors, Assassin’s Creed: Rogue stands out as a unique game that will entertain audiences both Christian and non-Christian. When I first heard of this game, I expected Shay’s transition to the Templars to be similar to the origin of Darth Vader, but fortunately that is not the case. Graphics were exceptional, though a little spotty, but the gameplay and storyline is very good. Fans of the games will most definitely love Rogue, though I advise parents to be cautious of letting kids under 14 play this game, even with the blood off and minimal strong language.