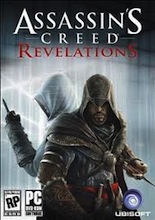 The Assassin’s Creed series has followed an untraditional pattern. The first involved Desmon Miles using the Animus (a machine that extracts ancestral memories from DNA) to relive the life of his first-century ancestor, Altair, a member of the order of Assassin’s which fights in opposition to the power-hungry Templars. The second game had Desmond living the memories of his forefather Ezio, who was an Assassin in Renaissance Italy. Then, rather than going straight to the third game, this spawned a trilogy following Ezio and the important events (fictional, though inspired by and directly involving historical facts and figures) that could lead Desmond and the other modern-day Assassins to powerful items left by mythical beings that apparently lived on Earth many years ago… yeah, this plot is quickly becoming reminiscent of Lost in its stubborn insistence to make no sense. But we’ll see if the writers know where they’re going with it.

In any case, Revelations wraps up the story of an aging Ezio, and also reveals a bit more about Altair’s life, supplying some long-awaited answers and the end of the starring role for both these characters. This time, Ezio is visiting Constantinople (which, in the tradition of the series, is carefully constructed with many real landmarks) soon before the reign of Suleiman and the rise of the Ottoman Empire.

The gameplay is very much the same as always; Ezio can freely run, jump, and swing over the rooftops, traversing the city with ease and performing assassinations gracefully. The player is tasked with killing a certain person, infiltrating a guarded area, or escorting an important person, and they must use all Ezio’s skills to do so. This all plays out from the third-person perspective and in various locations and settings across Constantinople.

The level of violence is similar to past games in the series. The gameplay often involves combat and sneaky assassinations. The primary tool for assassinations is the hidden blade, which extends from a device on Ezio’s wrist. He can subtly stab someone in the abdomen or leap from above to force them to the ground and stab them in the neck, or even extend both arms while standing between two guards to stab them both in the neck. There is also more straightforward combat with swords, knives, guns, and (a new addition to this game) bombs.

There is a very noticeable (but not too gratuitous) amount of blood when someone is killed, but no dismemberment. The most brutal moments are usually the counter-kills, when Ezio dodges an enemy attack and uses the momentum to perform a fatal attack on his enemy; the two most notable are when he stabs them under the chin and lifts them from the ground and when he stabs them in the face and twists the sword (and their head) around until the sword’s handle is once again facing him and he can take it back.

It should be noted that the strong language is only used by the modern-day characters, which do not play a huge role in this one, so the majority of the game, in Constantinople, is more mild.

Some dialogue in the course of the game (mostly random dialogue from the citizens in Constantinople) includes mild sexual references and some talk of prostitutes.

The opening screen of every game in this series informs the player that a multicultural team of varying religious faiths and beliefs developed the game. This is to assure the player that no offense is meant in the way the story plays with history and adds a fantasy spin on its events. For instance, the magical items the plot centers around are at one point (in the first game, not this one) credited for Jesus’ miracles and many other great accomplishments throughout history.

Revelations is the last game in Ezio’s story, and I think that’s a good thing, because the formula is starting to show it’s age. Jumping on rooftops and assassinating unsuspecting enemies is as fun and satisfying as ever, but this is the fourth time I’ve done it, with very few real changes or improvements to show for it. The second game was an incredible improvement; building on the foundation of the first one in all the ways it should to create a shining example of how to make a good sequel. But this third game in the series only adds a few things, most notably the bombs and a tower-defense-style mini-game, the first of which was kind of fun but wholly unnecessary and the second of which I only even had to play when the game forced me into the tutorial near the beginning; the need never arose after that. The story also seems to lack any real movement, which makes it drag pretty heavily until the third act, where it finally picks up and delivers a satisfying conclusion to Ezio’s story.

If you’re a fan of the series, of course you should play it. The gameplay formula may be getting old, but it was good before and certainly hasn’t gotten any worse, and I have a feeling you’ll need to know this game’s events to have a clue about what’s happening in the rest of the series. The game is entertaining enough, and the story is good enough by the end that I’m very glad I played it. It’s hardly a bad entry in the Assassin’s Creed series, I just think it’s comparatively the weakest, but still well-made and worth playing.

As for your children, it’s up to you whether they’re mature enough to handle this level of violence. The language is strong but not common, and honestly I think anyone mature enough to handle the violence should have a good enough grasp on reality so as not to be bothered with the clearly fictional alternate history and fantasy elements. So look up some gameplay videos if you want to see what it’s like in more detail, and decide what you’re okay with your child experiencing.