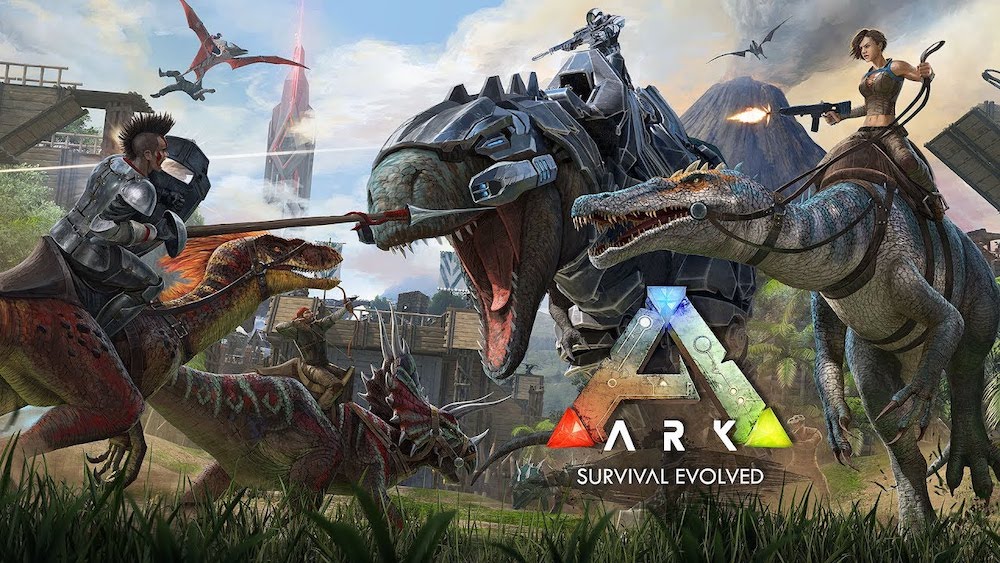 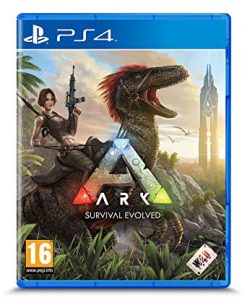 Game Description:
The success of Minecraft brought many open-world crafting games in its wake, some better than others. A stagnant genre was suddenly full of new entries, as game developers were inspired to make their own take on the genre.

Ark: Survival Evolved is one of those games. In Ark, you must survive on an island full of dinosaurs, making your way up from primitive, naked human to dinosaur tamer. It’s mainly an online multiplayer experience, where you join a server of other real people, each of various levels of skill. But you can also create single-player sessions if you desire.

With PixArk—a spinoff of Ark that leans much more heavily into its Minecraft-inspired roots—releasing this month, I thought it would be a good time to take a look at the original. Let’s see if this island dinosaur adventure is good for your kids.

Violence:
For a game about carnivorous dinosaurs, the combat is as expected. When dinosaurs attack your screen flashes red, and when you attack them, blood sometimes spurts out. The combat in this game is not overly graphic.

There’s a variety of weapons to craft to help you fight the beasts of the island. Depending on the animal, it can either be killed, or knocked unconscious—if you knock it out, you can make it your follower by bringing it certain foods. Some creatures can be tamed without fighting them.

Sexual Content:
You start the game as either a male or female model wearing only underwear.

Miscellaneous:
I was pleased to see that Ark sports a variety of options. Though most of them only affect the graphics, and not much else. I would have appreciated a subtitle option, a way to change the text size, and options to change the controls.

I also need to mention the Switch port of this game: it is horrendous. Not only was the font size not changed to accommodate the handheld platform (which resulted me squinting to read necessary text) the graphics were greatly downscaled to accommodate the system. It looks like a game on a previous generation system, with terrible-looking textures and graphics popping in as you approach them. Considering games like Skyrim and the new Doom were ported to Switch in much better condition, Ark’s shoddy appearance is bafflingly bad. I’ve also encountered a few glitches here and there, and though I didn’t personally experience this, other reviewers have said that the Switch port has very long loading times.

Positive Elements:
The island is a beautiful place to explore, with various dinosaurs to watch, fight, and befriend. Other prehistoric creatures also wander the area, and the bird lover in me was pleased to see dodos waddling about. There are also beautifully realistic physics, with large dinosaurs shaking the ground around you as they pass.

I also love the character creator in this game—you can make some hilarious humans with the various options provided. My avatar was a man with a balloon-sized chest named “Buffy.”

A Child’s Perspective:
Got any dino-lovers in your family? They’ll really enjoy this game. The realistic dinosaur models and activity on the island makes it a fun, prehistoric place to be.

Reviewers Thoughts:
Ark seemed right up my alley. I love open-world games, and this one seemed like one with a fantastic premise and setting. However, I found the game impenetrable as I played it, trying to surpass the high barrier of difficulty set by Ark.

My first few hours with this game were spent like this: grind, craft, die, repeat. It was frustrating, trying to tackle Ark’s massive world, only to die and have to start over. You lose all your items when you die, and though you retain your level and unlocked blueprints, it always felt like I was starting back from square one. There’s no interactive tutorial of any sort, just a “Survival Guide” with text explaining the game—and for me, any game that needs to explain itself with text and not gameplay has failed.

I found the game easier on single-player mode—for whatever reason, there was more “tutorial text” popping up. Perhaps because there were no players around? Either way, I had more fun on single-player, and the game was much better at telling me what I needed to do.

It’s a very dense game, and climbing the difficulty wall set by Ark takes a good amount of time. I enjoyed investing in this game, and if you’re eager for an open-world experience to sink your teeth in, you will too. Let’s tame those dinosaurs together, shall we?