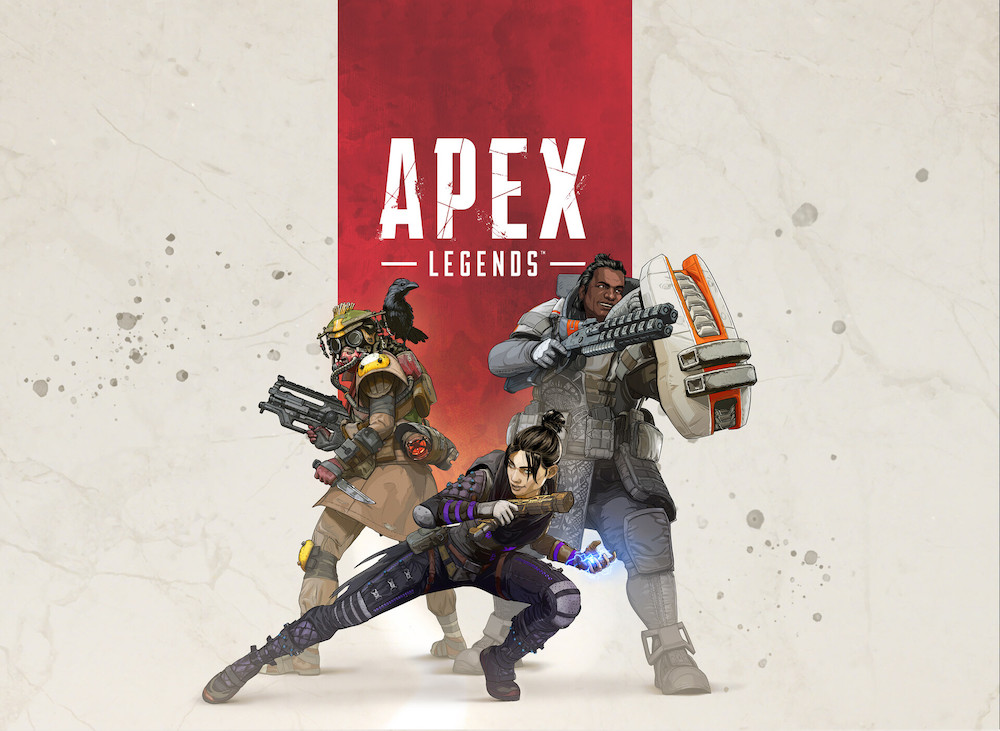 Game Description:
Whether you follow video games or not, you may have noticed the emergence of a new genre of multiplayer game known as the “Battle Royale,” popularized by PlayerUnknown’s Battlegrounds and currently ruled by the all-encompassing megahit, Fortnite. The latter in particular didn’t escape our notice, which is why Jonathan and I did an interview about it a while back.

Then, to everyone’s surprise, a new challenger entered the arena! Respawn Entertainment, creator of the popular Titanfall games (the second of which was quite excellent), was apparently working on this in secret for a good while, and simply dropped it onto the digital marketplace with an announcement that same day. For free! Within a few days, it had millions of players.

Apex Legends is similar to other Battle Royale games in concept; 60 players all drop from the sky onto various areas of a large environment. They have no equipment or weaponry at first, and scavenge the landscape to find what they need to survive. As players are defeated, a ring continually shrinks in on the play space, forcing players to inhabit increasingly smaller areas until only the winner still stands.

The differences Apex introduces pull from a variety of other games. It has the gunplay and some of the traversal elements from Titanfall, emphasizing quick movement and smart positioning. It has multiple characters with different abilities, similar to Overwatch, emphasizing teamwork and playing to your strengths. And it has a rather original and shockingly expansive “ping” system, which allows players to point at various items, locations, and players to communicate with their teammates.

How well does it all come together? We’ll talk about that once we get into the areas of concern for your children.

Violence:
The Battle Royale genre is all about being the last person alive, and the goal is to collect items that allow you to most effectively kill all the other enemy teams. To this end, players will use guns and explosives to kill enemies. Blood splatters from enemies as bullets hit them, but there is no graphic gory detail. There are some “finishing moves” players can perform on incapacitated enemies, which range from shooting them to kicking them to electrocuting them.

Spirituality:
One character in the game appears to be religious, based on a few voice lines referencing “the Allfather.”

Miscellaneous:
This game is free, but has options to pay real money for a variety of in-game items (most notably two playable characters and a variety of cosmetic options to make guns look cool). Since the game is online, players can also come across people speaking over the voice chat; other players can sometimes be unkind, say offensive things, and harass other players (which means to not only be aware of other players’ cruelty, but be sure your child isn’t picking up on it too).

The Apex game is framed as a gladiatorial-style competition, which could have disturbing implications, but considering you can actually bring back dead teammates, it seems unlikely that the characters are actually dying when they’re defeated. The game is unclear on this point.

A Child’s Perspective:
It’s a safe bet that if your child enjoys Battle Royale games and/or shooters like Call of Duty, they’ll enjoy this one.

I’ve always liked the genre in concept; it refocuses the usual “free-for-all” or “team death-match” multiplayer rulesets into a more long-term game focused not only on marksmanship, but on versatility and adaptability in situations where you may not always be on equal ground with the competition. But while I enjoyed Fortnite alright, I never really loved it the way I love multiplayer games like Overwatch or Rocket League.

But my wife and I have been playing Apex Legends far more than we should be. For now, at least, it’s supplanted Overwatch as our go-to relaxation activity. We’ve learned how to work together, help each other get the loadout we’re most comfortable with, and work with whatever random teammate we get paired with, and we’ve come out on top more often than we ever did playing Fortnite.

Part of this is simply because it appeals to our sensibilities more; the playable characters are all interesting and enjoyable, and playing to the strengths of our teammates is a ton of fun. But another part of it is that the game simply puts an excellent spin on the basics of the genre. The three-man squads that all jump together, the emphasis on quick traversal, and most impressively, the ping system. You can simply point at something and push a button, and your teammates will know exactly what you’re saying and why. It’s a revolutionary approach to team communication that I imagine many games will be ripping off in the near future.

And what’s more, its T-rated violence, non-existant price tag, and complete lack of other objectionable content makes it a pretty good option for kids who can handle online shooters. Just make sure to be aware of their online behavior, and feel free to check parental controls if you don’t want them talking to other players or spending real money on in-game items.