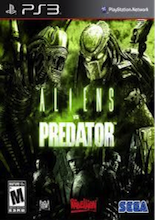 In 1979, Ridley Scott released what would become the definition of alien sci-fi horror movies, Alien. Alien featured a terrifying creature called a Xenomorph that was accidentally brought aboard a mining vessel and massacred almost everyone aboard.

In 1986, James Cameron released a sequel called Aliens, where this same breed of alien multiplies and kills just about all the colonists on the planet LV-426 (the aliens’ origin), and a handful of colonial marines led by Ripley go in to wipe them out for good.

In 1987, Arnold Schwarzenegger made his debut in the survival-horror flick Predator, where he and his fellow soldiers are hunted by a barbaric alien who hunts armed humans as trophies.

Eventually, the people at 20th Century Fox butted heads together to create a canon that pitted both monsters against each other. Thus, the Aliens vs. Predator franchise was born. In spite of the films’ failures, the studios at Fox and SEGA released the ultimate Aliens vs. Predator game in 2010, where you are one of: Hunter, Survivor, or Prey and Alien, Predator, or Marine.

There is a lot of bloodshed in this game, from aliens, predators, humans, and androids. Those who have seen the Alien movies will know that the aliens bleed acid, which can hurt the player if splashed by it. Some bodies eventually disappear after death, and some enemies can be dismembered. Aliens can explode when incinerated with a flamethrower. The human and alien deaths are very violent, but I found it hard to see killing androids as extremely violent, since they are only robots. In spite of that, their entrails are white and vaguely human-like, and they bleed white blood.

During the Marines campaign, there are some skinned human corpses hanging from above. An alien bursts out of a man’s chest. One cutscene has an android shot in the head. Also, the Predator player can choose to rip out human heads and spines in gruesome detail.

When playing as alien, you can kill enemies with your claws or tail. Finishing moves include biting heads off from a visceral first-person perspective, decapitations, harvesting prey with a facehugger, or skewering enemies with your tail. The beginning of the Aliens campaign features some human test subjects being hosted for Alien larvae. The scenes are very violent and disturbing.

SPOILERS: Alien Mission: At the end of the Alien campaign, the alien removes the Elite Predator’s mask from his face and attaches a facehugger to him, in up-close detail. Later on, a xenomorph transforms into an Alien queen, with her new self bursting out of her old shell. Her chamber is surrounded with half-dead human hosts.

During the Predator mission, the player can slice through opponents, blast them into gory chunks with arc cannons, and unleash gory finishing moves like ripping an alien’s tongue out, impaling heads, breaking (or ripping out) spines, decapitations, slitting throats, and impalings. I won’t neglect to mention that your Predator can take trophies from the humans, such as ripping out their head and spine in gruesome detail. Sometimes, you have to use a decapitated head to access retinal scanners, which I found incredibly revolting. A Predalien (Predator/Alien hybrid) rips out a human’s spine off screen, but we see the bloody trophy in the creature’s hand a second later. In the Marines campaign, a Predator rips out a Marine’s head and spine in gory detail.

Frequent uses of f**k, s**t, and other profanities, especially in the Marines campaign.

In the Marines campaign, the first level takes you into a nightclub called Club Eden. There is one holographic stripper in the club (privates mostly covered) and posters of naked silhouettes can be seen spread throughout the club.

The Predator campaign involves a rite of passage for the player, as he progresses throughout the game. The Predator is called to fight the humans that desecrate his people’s sacred relics and temple. The temple is reminiscent of the Egyptian and Mayan temples in ancient history, as is the Predator civilization. The Predators hunt the Aliens as some ancient sport prey.

In the Marines campaign, one Marine tells the player after he’s just survived an Alien attack, “You must have an angel watching over you or something like that!”

SPOILERS: Predator Mission: In the Predator temple, the player witnesses holographic ghosts in a funeral procession for an Elder Predator.

This game involves playing one of three sides in the Aliens vs. Predator universe, which changes the rules of right and wrong for each side you play. The Aliens view the humans and Predators as only prey or oppressors, the Predators view the humans as sacrilegious prey worthy of the hunt, and the Marines view both Alien and Predator races as the enemy. The non-human races kill without remorse.

The Alien and Predator races use violence for sport or revenge, but the Marines use violence only in self-defense. There is one scene where the player is supposed to shoot a dying Marine, as he has an Alien inside him, and is doomed already.

In spite of each side’s opinion of the other side, the main villain that stands out throughout the game is Karl Bishop Weyland, CEO of the Weyland-Yutani Corporation. Infamous for sacrificing human lives for the sake of science, using the xenomorphs for their own personal gain, and turning on their human partners when they’ve outlived their usefulness.

One major character in the Marines campaign chooses to save a dying Marine and help the player stop Weyland.

There have been many Aliens vs. Predator games before this one, but all of them pale in comparison. However, some of the gameplay is a little difficult, like crawling on walls and ceilings as a xenomorph in first-person made me dizzy. However, even I, an adult gamer, got pretty scared during the Marine missions, feeling like a xeno is about to pounce on me in the dark any minute. Aliens vs. Predator definitely gets points for scariness.

Despite its neat design and exceptional gameplay, this game is not for the faint of heart. Even some fans of the franchise might be more than disturbed by the gory violence than most. This game would mostly suit hardcore fans of the Aliens and Predator franchises. This game is also not very long, as each campaign is about 6 missions long. If the violence and language in this review doesn’t bother you, I recommend renting it first.