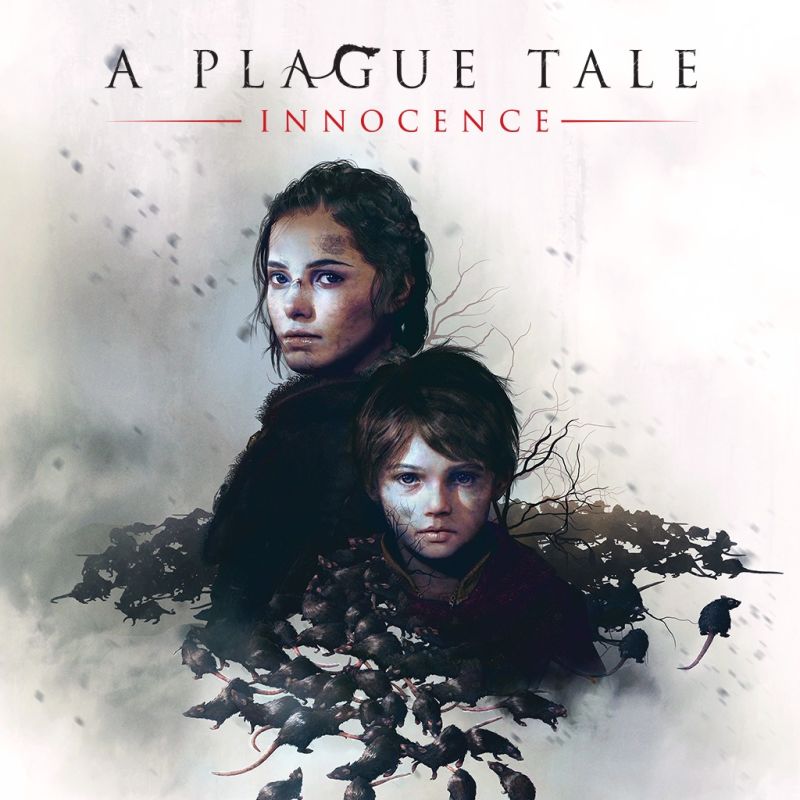 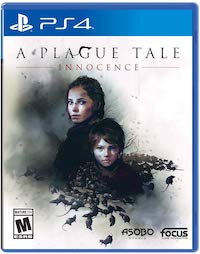 Game Description:
The Plague is still remembered as one of the most large-scale disease-based tragedies in history. Millions of deaths, spurred on by the simple fact that humanity didn’t really understand how sickness worked and couldn’t effectively combat it. So of course, it’s an excellent backdrop for a deeply dramatic story.

A Plague Tale: Innocence is about a young woman named Amicia and her little brother, Hugo, trying to survive in 14th century France. As the plague begins affecting Europe and deadly rats begin swarming the streets, the Inquisition comes to her house with violent intent, leaving her to protect her brother from both the plague and the soldiers intent on killing her and capturing him for mysterious purposes.

As you might imagine from both the subject matter and the game’s M rating, these children go through a lot. There’s a reason the subtitle is “Innocence.” It’s a story of young people being faced with far more than any child should have to deal with, and how they cope with this reality while growing closer and wiser. In many ways, the game resembles an apocalyptic young adult novel, like The Hunger Games or The Darkest Minds.

That said, the M rating is enough to give pause before giving this game to a child who might read those books. Let’s take a look at what earned that rating so you can make the best decision possible for your child.

Violence:
This is where the game really earned this rating. This isn’t one of those games where the player goes on a rampage, brutally killing their enemies in a hail of bullets and explosions; in fact for most of the game, Amicia is armed with little more than a slingshot and a variety of ammunition that rarely amounts to lethal capabilities. While she will occasionally kill people with a stone thrown to the head, it’s relatively infrequent and not particularly graphic, and the game treats these moments where Amicia must take life (which increase over the course of the game) with weight and regret.

Rather, most of the game’s violence comes from the rats. The game depicts the rats with an almost mythological quality, swarming everywhere and hungrily consuming any one unlucky enough to come into their path without a light source. The player will see many people consumed by the rats (and must occasionally cause this to happen); the rats swarm over someone while they scream and flail until settling lifeless on the ground. Some grizzly scenes incude a battlefield with corpses piled throughout, a farm with dead animals piled in veritable walls of corpses, and human corpses half-consumed by the rats, with viscera laid out among skeletal forms or severed torsos.

There are also instances in which failure on the player’s part results in violence shown toward the children. Most of this takes place offscreen, but there are instances in which the player will see one of the child characters buried under rats, stabbed through the chest, or hit in the head with the butt of a sword. One instance later in the story depicts a teenager dying with arrows in his back.

Language:
Intense language such as “f**k” and “s**t” appear in the dialogue, usually said by soldiers but occasionally by teenagers.

Spirituality:
Given the involvement of the Inquisition and the setting of 14th century France, it would be hard to make this game without some presence of the Catholic church. But the game also includes other mythological elements.

The primary force of evil in the game is the Inquisition, though it’s later revealed that this particular inquisition is headed by a corrupt bishop who, against the doctrine and command of the church at large, is seeking a power that exists in Hugo’s blood. Specifically, the power to control the rats. By the end of the game, the player can use Hugo to control where the rats go, and the Bishop is controlling his own legion of them. It’s unclear exactly what the nature of this power is, except that it’s ancient and passed down through Hugo’s bloodline. The use of alchemy to suppress this ability is a major part of the plot.

Miscellaneous:
As previously mentioned, Amicia must sometimes kill soldiers to survive. This is, at first, treated with surprising weight; her first kill is out of desperation, and even then not entirely intentional. She’s particularly horrified the first time she knocks out a guard’s lantern to allow the rats to swarm in and consume him. As the game continues and the evil of this inquisition becomes more clear (and she is filled with righteous anger), she becomes more accustomed to it.

Positive Elements:
This story is ultimately about family, both biological and chosen. Amicia and Hugo’s connection is central to the story, and of similar importance is the relationships between them and the other children who join their band over the course of the game. All these characters show bravery and loyalty throughout the story.

It’s also about corruption, and the responsibility one has to wield power with responsibility and selflessness. The bishop who should have been using his power to help people in the plague instead declared an inquisition to seek out power, and even the parts of his plan that did involve helping people are explicitly for his own power. The game simultaneously shows how the innocence of children guides power more morally than the power of authority, and how abused power can strip that innocence away.

Reviewers Thoughts:
A Plague Tale: Innocence is a strange game in some respects. Most notably, it reads on paper like a story for children; a dark one, for sure, suitable more for teenagers than adults, but a children’s story nonetheless. If it was a book, it might be something your child might read in their high school class, perhaps with that golden Newberry Award sticker on the front.

And on one level, that comparison bears out. Younger players will likely be able to relate to the cast of children, and the game explores the kinds of themes you would expect from a historical fiction story (albeit with heavy fantasy elements later on). In addition, the game’s interactive nature increases the weight of tragedy around death.

But on another level, the graphic violence and strong language make the game a bit more adult than most of those stories tend to be. While the story’s plot and thematic elements will appeal to older children, the content makes it difficult to recommend to all but the most mature of teenagers.

I’m uncertain if that’s necessarily a bad thing–there’s nothing wrong with stories told for adults, after all, nor with those stories bearing a resemblance to stories for children–but it does make A Plague Tale: Innocence a strange one for you to determine its appropriateness for your children. It may very well be a valuable and enjoyable experience for them, but you’ll have to make sure they can handle it. And if so, I say it’s worth a shot.