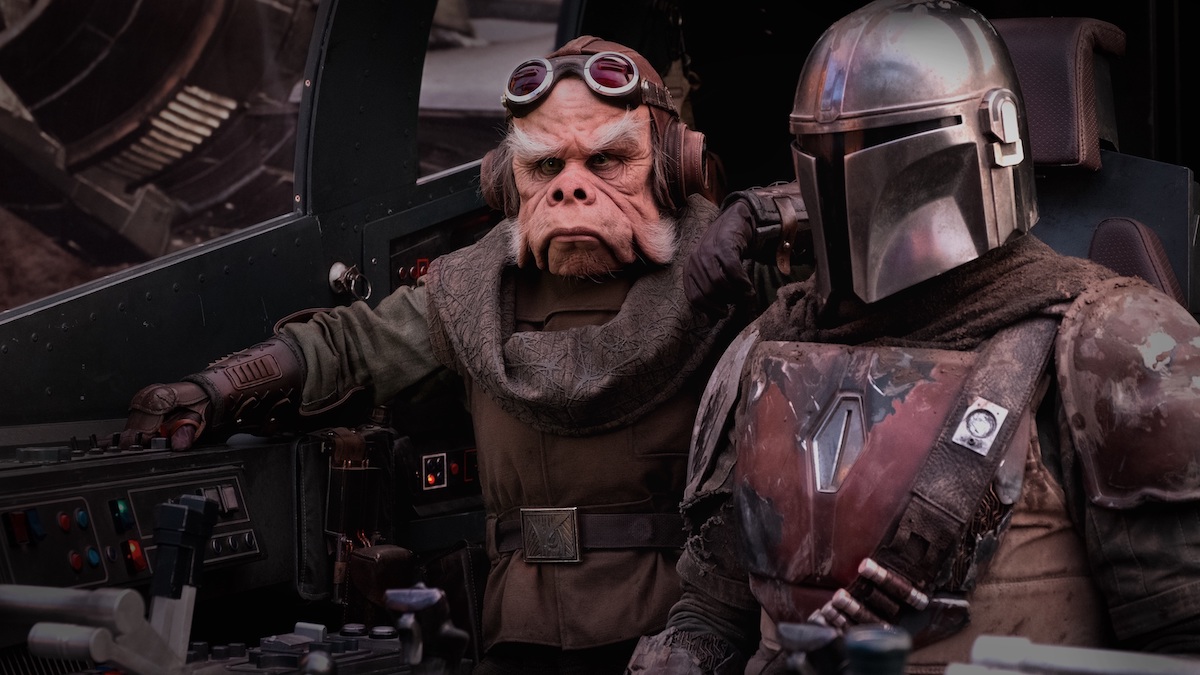 The saga continues with the Mandalorian and the green creature that becomes known as the child. This episode features more action than dialogue, but it seems clear the Mandalorian is going to face a dilemma as far as what to do with the child when he brings him to The Client for the bounty.

We learn all kinds of things during this episode, such as the child eats frogs whole, the Jawa’s eat with their hands, and that even the Mandalorian can face defeat.

It’s interesting to see how the Mandalorian can develop as a character despite never showing his true face. Without a single expression, we know he is feeling some inner turmoil when it comes to bringing the child to The Client.

The Mandalorian’s ship is scavenged by Jawa’s, rodent-like species who have power in numbers. The only way the Mandalorian can get his parts back and repair his ship is to beat this furry rhino so he can steal his egg – which the Jawa’s will then savagely consume.

The Mandalorian is moments from defeat when the child uses what we assume to be The Force and suspends the violent creature so the Mandalorian can stab it and save his own life. The child makes a sacrifice, he uses his own power and energy to protect this man who is intending to bring him in to The Client who only wants the child to be dead.

We know it’s a sacrifice because the child falls into a somewhat comatose state after using his powers, showing how much it took out of him to save the Mandalorian’s life.

There is a moment when the Mandalorian looks over at the child, realizing what he is doing for him, and – again without being able to see his face – somehow we know he is stunned and overwhelmed by this act.

Toward the end of the episode, the Jawa’s have returned the parts of the Mandalorian’s ship, and Kuiil from the Ugnaught species – who we met in episode one – helps the Mandalorian put his ship back together. Despite showing impressive skills in reassembling the ship, Kuiil declines joining the Mandalorian’s crew. He had sacrificed his time and energy to help the Mandalorian and he did not want anything in return.

Mandalorian: Please allow me to give you a portion of the reward.

Kuiil: I cannot accept. You are my guest and I am therefore in your service.

Mandalorian: I could use a crew member of your ability, and I can pay handsomely.

Kuiil: I am honored, but I have worked a lifetime to finally be free of servitude.

Mandalorian: I understand. Then all I can offer is my thanks.

Kuiil: And I offer mine. Thank you for bringing peace to my valley. And good luck with The Child. May it survive and bring you a handsome reward. I have spoken.

The final word of Kuiil have to sting the Mandalorian a bit. And good luck with The Child. May it survive and bring you a handsome reward. The Mandalorian’s slow movements as he settles into his ship and the way he stares at the child as he heads into space seem to indicate an inner conflict. He’s seen others sacrifice for him – and now we are left to wonder if he might be called to do the same.

In the New Testament book of Romans, the author is writing about how good God is even in judgment. He writes about how God’s goodness is designed to cause others to go in a different direction.

Romans 2:4
Or do you show contempt for the riches of his kindness, forbearance and patience, not realizing that God’s kindness is intended to lead you to repentance?

When we encounter God’s goodness – when we realize how God is patient and loving with us – it should often lead us to repent. Repentance is changing our minds about the action we are taking and moving us to walk in a different direction.

As the Mandalorian encounters the goodness of others – specifically the child and Kuiil – it seems it is causing him to reflect on some things. While we cannot see into his mind, we are left to wonder if the compassion and kindness he is being shown is leaving him to consider a change of direction.

In the same way, you and I are invited to encounter the kindness of God and consider how experiencing His love might propel us toward a new direction.