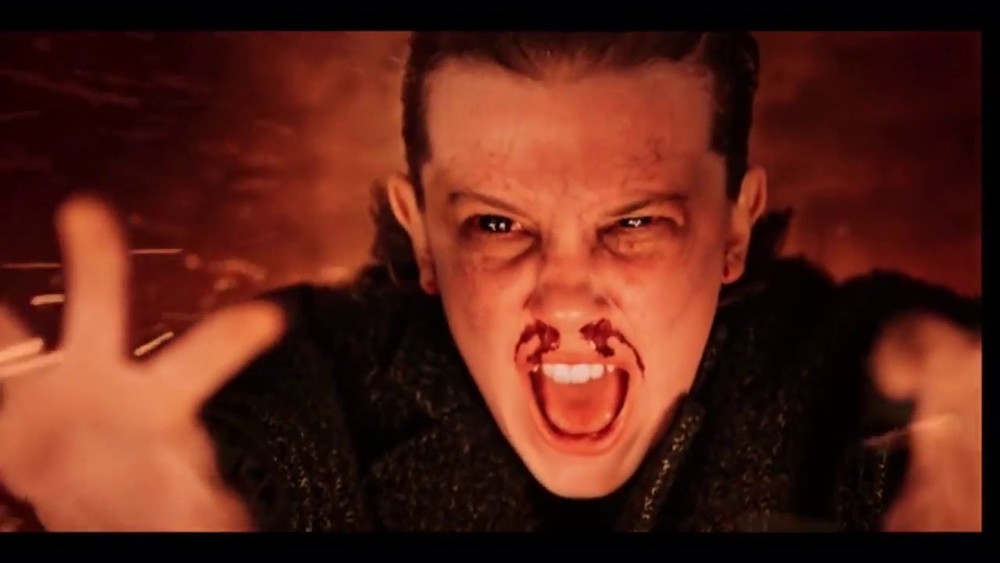 Stranger Things wraps up their second season with an episode that had predictable resolution of some plot points but still managed to keep things exciting. The episode also did a great job of setting up season three which will be released on July 4, 2019.

As I look back on this season, I can’t help but to marvel at the determination of three characters. Their persistence was seen throughout the nine episodes, though in this final one they all manage to see the fruit of their dedication at long last.

The idea of determination is one that easily resonates with people. Everyone wants more determination in their life. To be determined means you have a firm purpose, you are willing to keep going after something until you get it. There may be ups and downs, even moments where quitting seems real – but the one who is determined gets back up and presses through even the most challenging circumstances.

Joyce Byers has been determined to help “fix” her precious son Will, who was inhabited by the Mind Flayer in episode three. New addition Max Mayfield has been determined to fit in with her new friends and get her step brother and his overdone 80’s hair to stop bullying her. We also see Eleven determined to see her crush, Mike, again (and vice versa) while stopping the madness that has continued beneath the Hawkins Lab.

The episode even begins with an example of determination as Mike sees Eleven for the first time since he thought she died at the end of season one.

Mike: I never gave up on you. I called you every night. Every night for…

Ah yes. The joy of a love story featuring thirteen-year-olds. Yet the determination can be seen in Mike calling her every night for nearly a year. Allow me to grab my Kleenex…

Max has been an interesting character this season despite it seeming like one of her purposes is to create a “crush” triangle with Dustin and Lucas. Her family dynamic is beyond dysfunctional and her step-brother Billy has been overcompensating for his dad issues much to Max’s chagrin. Besides being a racist and not exactly a respecter of women, Billy has hampered Max’s efforts to make friends.

When Billy finds her hanging out with a group that includes Steve and Lucas, he puts a beatdown on Steve and starts to randomly break things in Byers home. As Billy threatens to hurt Lucas, Steve comes in and finally shows some fight against the bully. It isn’t long until Billy turns the tables and is bloodying Steve in what is an uncomfortable scene. Max reacts by jamming a needle full of Will’s knock out juice into her step brother’s neck. After threatening the woozy brute with a Lucille knock off bat, Max takes Billy’s car keys from his pockets, and the gang takes off.

Determination. She was not going to let him kill Steve (he came close though). Max had enough of Billy keeping her from connecting with her friends, and did what was necessary to force him to reform his bullying ways.

Meanwhile, Joyce has the realization that if they heat up Will just enough, the Mind Flayer won’t be able to stand it anymore and will leave her boy alone. Nancy and Steve help her by violating every space heater safety rule and warming up Will like a hot pocket. In a fast paced sequence where the action moves from different locations every few moments, Will begins to turn black as the Flayer clearly hates what’s happening and Joyce eagerly shares what she’d like the monster to do:

Few things threaten a monster like a mother’s scorn. Her determination pays off as Will comes back to her and the Mind Flayer moves on to other Flaying-like things. Joyce now has this to hold over Will whenever she wants something done. “Will, go clean your room – I mean, do you remember when I saved you from the monster that lived inside of you?” Man, that Will Byers has the worst luck.

Of course the climax of the season revolves around its biggest character, Eleven. She struggled in the early episodes as Hopper put rules on her that only stirred her teenage angst. Eleven has returned from her prodigal trip and has reunited with Mike. While that’s all great and stuff, she’s really here to do what only she can do – close the gate to the Upside Down.

Determined, Eleven successfully shuts the door to the mysteriously evil world and is exhausted emotionally and physically. In what is one of the memorable scenes of Stranger Things, Hopper embraces her as the dad she never had and affirms her with a father’s love.

Hopper: You did good, kid. You did so good.

Max, Joyce, Eleven all showed the fruits of determination. They persisted, they pushed through adversity and accomplished their goals.

The season winds down with everyone at the surprisingly lively middle school dance, but the happy ending will not last. The Mind Flayer is alive in the Upside Down proving this dark mysterious world is determined to return in the upcoming days.

For you and I, it can be easy to get weary when we try to live out the life God called us to. Life can be hard enough when we consider the different responsibilities and burdens we carry. The New Testament book of Galatians urges us to be determined when it comes to doing the good that God created us for. Galatians 6:9 says:

Let us not become weary in doing good, for at the proper time we will reap a harvest if we do not give up.

As you and I walk through this life, let us have determination to do good no matter how weary we get. God promises us that if we do not give up, if we keep ourselves determined, there will be a harvest reaped as a result of our perseverance.