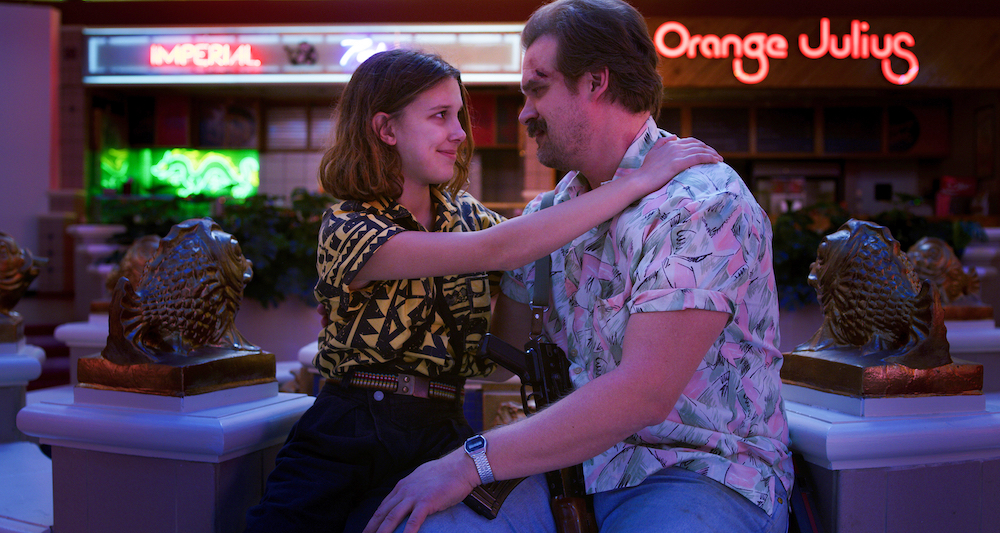 A Note to Parents: We at TheSource4Parents.com realize it’s difficult to find fun family entertainment today. With that in mind, we realize that a few of you might object to some of the content in shows like Stranger Things and choose not to show it to your kids. After all, even secular media organization Common Sense Media rated Stranger Things “age 14+”… so maybe use that as a rough plumb line. Even though this show is mild by today’s standards, it does include foul language and some sensual situations (which might be good to dialogue about). If you do decide to let your kids see it, hopefully the following discussion guide will give you some ideas of themes you can discuss and what scripture says about it.

Stranger Things just dropped their third season and critics & audiences alike are already loving it! Families are loving it too…it fills the need that E.T., Goonies, and Super 8 once provided… kids on bikes saving the world! (And probably is about the same “rating” for language, violence, etc. Truly PG-13)

But Stranger Things also provokes good discussion about everyday life and relationships, or even deeper discussions about its naturalistic world view. Regardless, we hope you use it to provoke meaningful conversation in your home!

Episode Eight: The Battle of Starcourt

At long last, Hopper meets up with Nancy and Mike’s crew in an intensely fitting end to the third season of Stranger Things. Elsewhere we learn Dustin’s girlfriend Suzie-poo is real, Hopper finally defeats the Russian Terminator (before seemingly sacrificing himself while once again closing the gate to the Upside Down), and the Mindflayer makes a brief appearance at the Starcourt Mall, only to be defeated as Billy finds redemption.

Change is the Only Constant

Hopper’s journey appears to come to an end as he gives Joyce a knowing look before she turns the key, destroying the electromagnetic drill and closing the gate. Everyone present seems to evaporate, and we can only assume that Hopper is gone.

As El prepares to move away from Hawkins with the Byers family, she comes across the notes from Hopper’s planned conversation with her and Mike. Of course, Hopper decided to just threaten Mike instead of ever talking with Eleven about their relationship, but now El was able to read Hopper’s emotional writings. Here’s the end of the letter:

Hopper: But I know you’re getting older. Growing. Changing. And I guess if I’m being really honest, that’s what scares me. I don’t want things to change. So, I think maybe that’s why I came in here, to try to maybe stop that change. To turn back the clock. To make things go back to how they were. But I know that’s naive. It’s just not how life works. It’s moving. Always moving, whether you like it or not. And, yeah, sometimes it’s painful. Sometimes it’s sad. And sometimes it’s surprising. Happy. So, you know what? Keep on growing up, kid. Don’t let me stop you. Make mistakes, learn from ’em, and when life hurts you, because it will, remember the hurt. The hurt is good. It means you’re out of that cave. But, please, if you don’t mind, for the sake of your poor old dad, keep the door open three inches.

Seeing as though it’s 1985 in Hawkins, it’s only fitting that Hopper’s words are reminiscent of an iconic line from the 1986 classic movie Ferris Bueller’s Day Off. Ferris famously says, “life moves pretty fast. If you don’t stop and look around once in a while, you could miss it.”

Hopper is struggling with change, but honestly who can blame him. When you consider all that has happened in this rural Indiana town over the past several years, it would make sense that every character would long for some stability, some things to remain the same.

It’s been ironically suggested that the only constant in life is change. We can be sure that life in this world is seldom going to remain the same. During the teenage years there are so many changes. Friendships change, interests change, physical traits change, and more. It’s common for teenagers to go back and forth from wanting to grow up and be an adult to never wanting to grow up, but wanting to stay young forever.

Perhaps the changes you’ve faced are a result of tragedy or some other hardship that was outside of your control. Maybe you’ve dealt with divorce and the unthinkable reality that your family will be different forever.

Maybe you’ve lost some relationships that were meaningful to you, and it’s left you wishing things were like they used to be. Or maybe you’ve moved to a new city, and so much has changed as a result.

In the Old Testament book of Deuteronomy, in chapter 31, there is a major change underway. Moses had led the people of Israel for decades, but he was old and no longer leading them. He was handing off leadership to a much younger Joshua, and wanted to give the young leader some wisdom on dealing with this major change. Check out Deuteronomy 31:8:

8 The Lord himself goes before you and will be with you; he will never leave you nor forsake you. Do not be afraid; do not be discouraged.

In the midst of change, in the middle of the fast pace of life, grab hold of these words. The Lord Himself goes before you and will be with you. Consider the implications of that! God not only walks with you, but He has gone ahead of you to prepare the way. That’s awesome!

The promise that follows is that not only does He walk with you, He is never going to stop walking with you. As a result, you can choose to not be afraid or discouraged – because God knows what’s coming and He is with you, He is for you.

When life moves fast, when we wish we could go back, let’s remember that God has gone forward and will bring us along. When we are overwhelmed by the prospects of change or by things we simply wish were different, we can grab onto the truth that His presence means we need not walk in fear or discouragement.

Let’s be people who cling to Jesus, confident that His presence through everything will make all the difference.

Let’s take a little more time to discuss this: