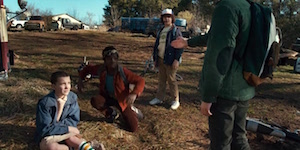 Trust is such a simple concept and yet one which is constantly misapplied in our world and even our own lives. How often have we heard the words, “I got this. Trust me!” from different people and in different circumstances? But in how many of those promises can we actually place our trust?

Many times, I’ve asked my kids to do chores (that they may be less than interested in), and all too often, I’ve heard, “No problem Mom. I’ll do that when I’m done with (whatever it is). Trust me.” Now, I’m not calling my kids blatant liars, but let’s face it, sometimes the words “trust me” don’t really mean that – instead, they mean, “Let me keep going with whatever I’m doing. Maybe I’ll get around to following through on what you want if I feel like it.”

In Episode Seven of Stranger Things, “The Bathtub,” the issue of trustworthiness (or lack thereof) runs as a consistent theme throughout, and it is worthwhile to consider the differences between the trustworthy and untrustworthy characters presented.

To begin with, we discover Dustin, El and Mike struggling to hear Lucas’ voice over a CB radio. Seeing a Hawkins van parked outside their home, Mike rushes upstairs to speak to his mom (who is on the phone). She brushes him off (although he doesn’t explain himself well), Dustin interrupts with a “We have to go – NOW!” and the kids jump on bikes shouting, “Go, Go, Go!” as several more Hawkins vans pull into sight.

As a parent, I was struck by the fact that Mike’s mom didn’t tune-in to his need for her at that moment, in spite of being on the phone. Moms know the difference between real need and needless interruptions. It was obvious that Mike didn’t really trust his mom enough to fill her in on critical information, let alone seek her help, and simply rode away on his bicycle. It was a breakdown of communication and relationship because of a lack of trust – Mike didn’t believe in his mom as his ally.

The previous episode highlighted ongoing tension between Mike and Lucas. Remember, Lucas did not want to include El as part of the group, and Mike refused to come to that agreement – ending in a no-handshake situation. During the getaway scene in this episode, El saves the group by flipping a van over their heads, allowing for them to escape and meet up with Lucas. El’s act of strength and power used to benefit the group changes Lucas’ mind about her and Mike. The following dialogue illustrates the renewed trust that is established in the group:

Theme music begins to play leaving the audience on a happy note that trust and friendship have been restored.

Next, we turn to the police station where Jonathan is in handcuffs. Joyce has arrived with Hopper and is demanding that the cuffs be removed. The contents of Jonathan’s trunk are revealed (including bear traps, gasoline, and other suspicious weaponry). Hopper turns to Jonathan, demanding to see him in his office. Jonathan’s skepticism is immediately tested when he replies, “You won’t believe me.” But Hopper has had weird experiences too, and responds, “Why don’t you give me a try?” The audience doesn’t even see the reconciliation that happens next, but later on we discover that Jonathan, Nancy, Joyce and Hop are working as a team to find Will. Interesting. A situation (in jail), which would often result in a negative outcome between teen and adult, yet Hop is someone Jonathan and the others, can place their trust in. He’s on their side. And Jonathan also demonstrates trustworthiness in his story.

We jump back to the Wheeler residence where Brenner (Modine) and his crew are questioning Mike’s parents.

No, no. Absolutely not. Our son with a girl? [chuckles] I mean, believe me, if he had a girl sleeping in this house, we’d know about it. Wouldn’t we? (turning to his wife, Karen, who lets out a sigh).

This brief exchange between Mike’s parents reveals so much about how little they know their own children. Turning to Brenner, Karen begins yelling in frustration, and Brenner has an interesting response:

I understand how upsetting this is. I wish we could tell you more but I can tell you that your son, Michael, is in real danger. We want to help him. We will help him. I give you my word. But in order for me to do that you have to trust me. Will you trust me? (Karen reluctantly nods). Good.

Brenner’s use of the word “trust” has been used throughout the entire season of Stranger Things. And one thing the audience has known (and El is discovering) is that his words mean the exact opposite. Brenner is only concerned about two things – power and control – he has no real love for El or genuine concern for Mike and his friends. As Karen nods her reluctant “yes,” the audience cringes because she is trusting in deceptive words. Yet, our society does this all the time, and our kids will too if we don’t teach them discernment and real trust in the Lord.

In the next scene, we begin to see a slight character shift (perhaps in the direction of real trustworthiness) in Steve. He and his friends are together, and Steve criticizes them for being so mean to Nancy (spray-painting obscenities about her in the previous episode). Steve’s own hypocrisy is brought into question, because he was participating too, but Steve seems to honestly be changing and regretting his own past bad behavior with Nancy. He tells his friends, “She actually cares about other people.” The scene climaxes in a near fist fight. The audience realizes how tenuous a friendship Steve and his “friends” really have, and what little trust exists between them.

As this episode winds itself up, we come full circle with a concerted effort to find Will. Adults (Joyce and Hopper), teens (Nancy and Jonathan) and kids (Mike, Dustin, Lucas, and El) come together as they realize that they really can trust each other. Nancy suddenly remembers the CB radio and begins calling out to her brother. Hiding out in an old bus, Mike goes back and forth over whether to respond or not. But when Hopper breaks in, taking away Nancy’s CB, and begins confidently and authoritatively assuring Mike and the others that they can trust them, Mike finally answers, “Yeah, I copy. It’s Mike. I’m here. We’re here.”

A rushed series of events take place. Hopper knows where the gate is and says he is going to go get Will. Jonathan wants to go to, but Hopper responds, “Listen to me. I’m gonna find him. All right? You gotta trust me on this. I am going to find him.” Jonathan doesn’t argue – Hopper is a trustworthy guy. Needing El’s intense telepathic powers, a saltwater “bathtub” is created with more than 1500 pounds of de-icing salt stolen from the highschool. Joyce reveals herself as a trustworthy mother figure to El.

El is able to trust because she is shown real love, protection and friendship. The episode ends with Nancy and Jonathan deciding to finish what they started. Fearing that Joyce and Hopper are walking into the gate like bait, Nancy’s final words to Jonathan as they gather their gear and head out are, “Come on, trust me.”

I love watching Stranger Things. But while this episode batted the idea of trust around, I felt that one aspect was clearly missing – and that “One” is the most important of all. In the Bible, we are told to:

…be strong and courageous. Do not be afraid; do not be discouraged, for the LORD your God will be with you wherever you go.

Those who know Your Name trust in You, for You, LORD, have never forsaken those who seek you.

Trust in the LORD with all your heart and lean not on your own understanding; in all your ways submit to Him, and He will make your paths straight.

I could continue presenting verses on trust for pages more because the Bible is literally packed full of them. The main difference between the trust discussed in the Bible and that tossed around in Stranger Things is this – God can be trusted with everything, always and forever. He will never let us down.

Even the trustworthiest of people presented in Stranger Things (or in life for that matter) are flawed and make mistakes. The Bible strongly cautions us against putting our trust in idols, false ideas, and deceptive people. Jeremiah 7:8 says, “Look, you are trusting in deceptive words that are worthless.” I love this notion of words being worthless – when Brenner tells Karen to “trust” him, his words are worthless. They mean nothing. When Jesus says in John 14:1, “Do not let your hearts be troubled. You believe in God; believe also in Me,” His words are the worthiest of all – they carry the greatest truth of all – God is on our side when we trust in Him. He alone deserves our complete trust. And when we do that, we find that our hearts don’t feel afraid or burdened and that we have peace and joy beyond understanding. I’ll end this article with Jesus’ words again: “You believe in God. Believe also in Me.” (John 14:1)