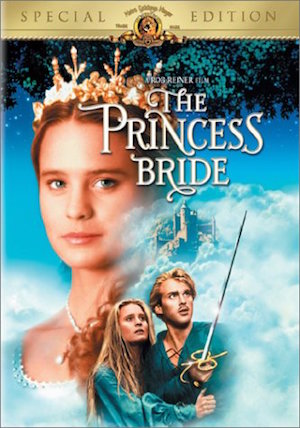 The cult classic The Princess Bride has it all: sword fighting, giants, magic, torture, castle attacking, and the occasional kiss. It’s all about a girl named Buttercup who lost her only true love – a boy named Westley – 5 years earlier.

She loved him because he told her he loved her, but never with the words, “I love you.” Westley always said it this way: “As you wish.”

They were set to be married, but while Westley was preparing for marriage, the Dread Pirate Roberts attacked his ship. Having heard of Westley’s death, Buttercup gave up on her own love, and became engaged to Prince Humperdink – even though she had no love for the Prince.

But true love proved her wrong. Years later, Buttercup is captured by a mysterious man – whom she eventually comes to find is Westley in disguise!

I told you I would always come for you. Why didn’t you wait for me?

Well, you were dead.

Death cannot stop true love. All it can do is delay it for a while.

I will never doubt again.

There will never be a need.

Westley promised Buttercup that he would be with her forever. But when she heard he had supposedly died, Buttercup assumed his promise would no longer be valid. But Westley proved Buttercup wrong and saved her.

This film is lighthearted and sweet – but it contains deep truth in its commitment to the idea of true love. This is evident in the promise between Westley and Buttercup.

This parallels so well with Jesus – who has promised to return and to gather His followers to Himself. Just because it hasn’t happened yet doesn’t mean that it won’t. We need to keep our faith that He will keep His promise.

“I will not leave you as orphans; I will come to you. Before long, the world will not see me anymore, but you will see me. Because I live, you also will live. On that day you will realize that I am in my Father, and you are in me, and I am in you. Whoever has my commands and keeps them is the one who loves me. The one who loves me will be loved by my Father, and I too will love them and show myself to them.”

As we saw in The Princess Bride, Buttercup lost her faith in the promise Westley made to her. True, she thought he had died, but Jesus also made us a promise and He also died. Does this mean that we should not believe the promise?

Like Westley told Buttercup, “Death cannot stop true love, all it can do is delay it for a while.” The death of Jesus could not stop His promise from being fulfilled! In times when it seems like His promise will not be fulfilled and we might feel like the persecuted disciples, we need to remember that Jesus will come again and His promises will be fulfilled and when that happens, we will feel like Buttercup and believe we can fly.

Let’s spend a few moments in prayer, asking God to strengthen our faith, and remind us of the mighty promise Jesus made to come back for us one blessed day.