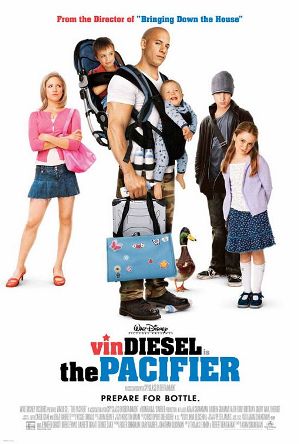 This 2005 family comedy follows the life of Navy Seal Shane Wolf, played by Vin Diesel. After the murder of a fellow agent he was assigned to protect, Shane is given a new task: to protect the deceased man’s five children.

This movie is a hilarious yet emotionally gripping film, as it captures some of the genuine struggles of both adolescence and parenting.

One theme that sticks out in this film is judgment. This circles around the oldest boy of the family, Seth. In once particular scene, the school principal asks to meet with Shane. She voices concerns about Seth because of various suspicious occurrences that have surrounded him, all seeming to point to the thought that he is part of some Nazi cult following. She lists some of the things Seth has done – things like bleaching his hair and bearing a swastika symbol in his locker.

Shane dismisses the odd signs, but promises to confront Seth later. When that time comes, Seth is dismissive and vague – he seems very uncomfortable. The facts seem to point to his guilt, but eventually the truth comes out when Shane follows Seth after he runs away from home. Shane discovers that Seth is a part of the school musical – “The Sound of Music” – and is playing the part of the young Nazi officer Rolfe.

The circumstances surrounding Seth were pretty suspicious, but in reality, he was just embarrassed about his involvement in the musical.

“Jesus entered Jericho and was passing through. [2] A man was there by the name of Zacchaeus; he was a chief tax collector and was wealthy. [3] He wanted to see who Jesus was, but being a short man he could not, because of the crowd. [4] So he ran ahead and climbed a sycamore-fig tree to see him, since Jesus was coming that way. [5] When Jesus reached the spot, he looked up and said to him, “Zacchaeus, come down immediately. I must stay at your house today.” [6] So he came down at once and welcomed him gladly. [7] All the people saw this and began to mutter, “He has gone to be the guest of a ‘sinner.’ ” [8] But Zacchaeus stood up and said to the Lord, “Look, Lord! Here and now I give half of my possessions to the poor, and if I have cheated anybody out of anything, I will pay back four times the amount.” [9] Jesus said to him, “Today salvation has come to this house, because this man, too, is a son of Abraham. [10] For the Son of Man came to seek and to save what was lost.”