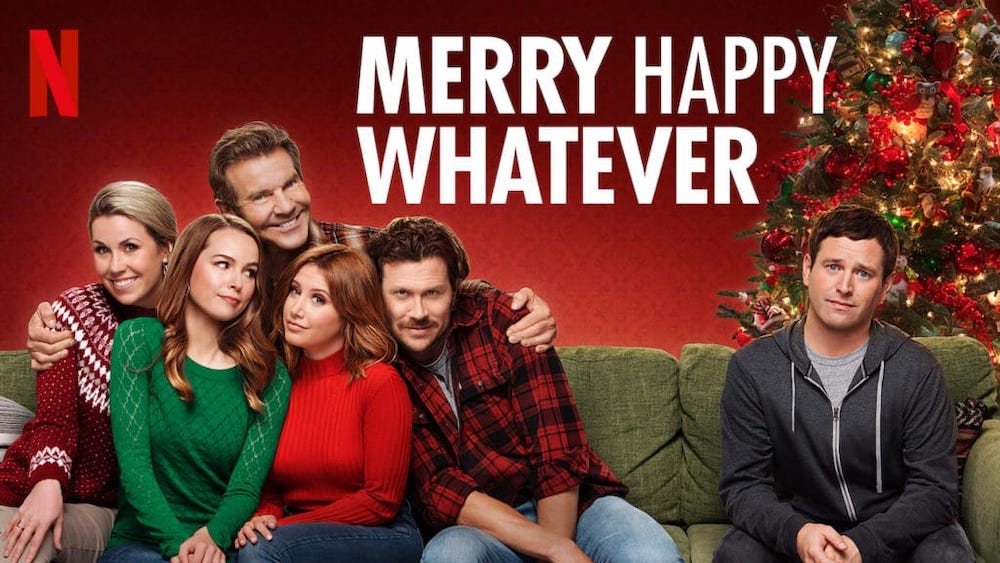 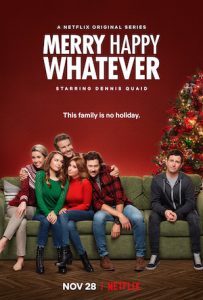 Netflix has introduced a series that focuses on a family gathering for the holidays. As you might expect, when family comes together, things are less than perfect. The Quinn family is what you might call a rather close family.

Joy: Don has a saying:  There’s the Quinn way and the wrong way. How to spend your money. How to vote. Where to vacation.

Todd: What kind of soda to drink.

Todd: It’s always got to be Pepsi.

Joy: And our spouses think the Quinn way is normal. But it’s like a cult. A G-rated cult.

The Quinn’s are gathering for Christmas, and Emmy, the youngest of the Quinn siblings, is bringing home her boyfriend, Matt. A struggling Los Angeles musician, Matt is intending to propose to Emmy on Christmas morning, but first wants to gain the approval of her father.

Matt: Anyway, I’m in love with your daughter, Mr. Quinn. And when a man loves a woman who has a father traditionally, uh…

Don: Are you asking for my blessing to marry Emmy?

Don: You are the first of my three daughters’ suitors to have the guts to do this.

I really appreciate it.

Matt: Oh. You are quite welcome.

Don: Which makes it that much harder to say no. You know, after this whole Alan thing, I just realized I got to be more careful about who I let into this family. But thanks for asking. It means a lot. Not enough, but a lot.

Earlier in the episode, Alan announced he was divorcing Kayla, the Quinn’s middle daughter. Don turns Matt down in an effort to keep control over his family and to do what he would consider as protecting his youngest daughter Emmy.

Throughout this episode we see people striving for the approval of others. Matt goes on a crusade to earn Don’s approval, which of course does not end well. While serving as Don’s unsolicited helper, fastening Christmas lights on the roof, Matt inadvertently shoots Don in the head with a staple gun.

Meanwhile, Sean Jr., who is Don’s grandson, has decided to tell his parents he’s an atheist. He approaches them with fear, though they receive this news well. Later he doesn’t tell his grandfather that he has surrendered his faith because he doesn’t want to hurt his feelings.

Matt observes that Don is acting strange around nurse Nancy and points out that Don has feelings for Nancy – which of course Don denies.

Finally, Emmy reluctantly agrees to meet to discuss a job in Philadelphia with a man named Ted, because her dad has pushed her pretty hard to at least sit down and consider moving back home.

Don: Uh, you know what would make this perfect? If you’d just agree to meet with Ted Boseman.

Don: Not to take a job, just to chat. You know, as a favor to an old man who just got staple-gunned in the head.

Emmy: Okay. Okay. Stop bugging me and I’ll do it.

The goal of this show is to look at the realities of family during the holidays, and to do so with a comical twist. Here we see the members of the Quinn family continuously fighting for the approval of each other and doing so in various ways. It’s difficult not to consider the ways each of us strives for the approval of those around us each day and wonder if that’s the right approach to relationships.

In the New Testament book of Galatians, the apostle Paul writes about our tendency to do things with the aim of pleasing others.

While there is nothing wrong with doing things that will bring joy to others, what we get here is a serious motivation check. As followers of Jesus, when it comes to our actions, we need to consider why we are doing the things we do. Paul rejects the idea that our focus, that our audience in this life should be others – but instead we should view God as the one we aim to please. The results of pleasing God surely will benefit others and often bring joy and even satisfaction to them.

Through His Word, God is challenging us to a perspective shift. He is inviting us through Paul’s experience to ask ourselves a penetrating question. If we are stepping through each day with a desire to please those around us, can we truly be considered servants of God? It does not seem God is calling us to cause displeasure to those around us, but instead is posing the concept that our primary desire, our ultimate calling is to find out what pleases Him – and to be driven by those things above all else.