Legend of Bagger Vance, The  Lay Down Your Burdens 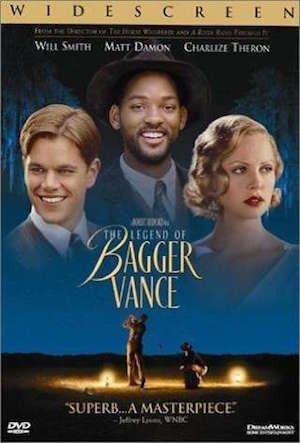 Rannulph Junuh (played by Matt Damon) is a fantastic young golfer from Savannah, Georgia. He wins several amateur championships and garners the love and support of all of Georgia. Unfortunately, his career is sidetracked by World War I, and though he survives, he experiences severe post-traumatic stress disorder after the war which completely destroys his game. When he returns home, he does so as a lonely drunk.

He abandons the game of golf for a long time, until he gets an invitation to play in his hometown against two of the greatest players in history. But his demons still burden him greatly – this is clear in the film when he suffers a wartime flashback after a string of bad shots. His caddy, Bagger Vance tries to help him deal with his burdens.

When Junuh angrily rejects Bagger’s calm encouragement – saying, “You don’t understand” over and over again, Bagger retorts with advice that reaches beyond the game of golf.

Bagger: “I don’t need to understand. Ain’t a soul on this entire earth ain’t got a burden he gotta carry that he don’t understand. You ain’t alone in that. But you been carrying this one long enough. Time to go on, lay it down.”

Junuh was one messed up dude. He suffered from what we now know as post-traumatic stress disorder, though he wouldn’t have called it that way back then. Instead of dealing with his problems, Junuh had tried to drink them away, gamble them away, and even ignore them away. But as the scene discussed revealed, those burdens still hung around his neck.

His caddy, Bagger Vance, shared some great advice with him. He basically said, “All of us have burdens in life, and we don’t always even understand why. But we must put them down, regardless.”

“Come to me, all you who are weary and burdened, and I will give you rest. Take my yoke upon you and learn from me, for I am gentle and humble in heart, and you will find rest for your souls. For my yoke is easy and my burden is light.”

The Legend of Bagger Vance

Bagger Vance told Junuh to put his burden down because he had been carrying it long enough. I think that’s exactly what Jesus is offering to us. He’s saying,

“Give Me your burden in exchange for Mine. Yours is heavy and mine is light. But when you pick up My burden, make sure to keep your eyes on Me so you can learn from Me, too.”

But sadly, some of us will respond the exact same way Junuh responded:

I don’t know how.

“Hey, I died to exchange your guilt for freedom, so give Me your burdens in exchange for My life.”

“You’ve been carrying that one long enough.”

“Come to me, all you who are weary and burdened, and I will give you rest.”