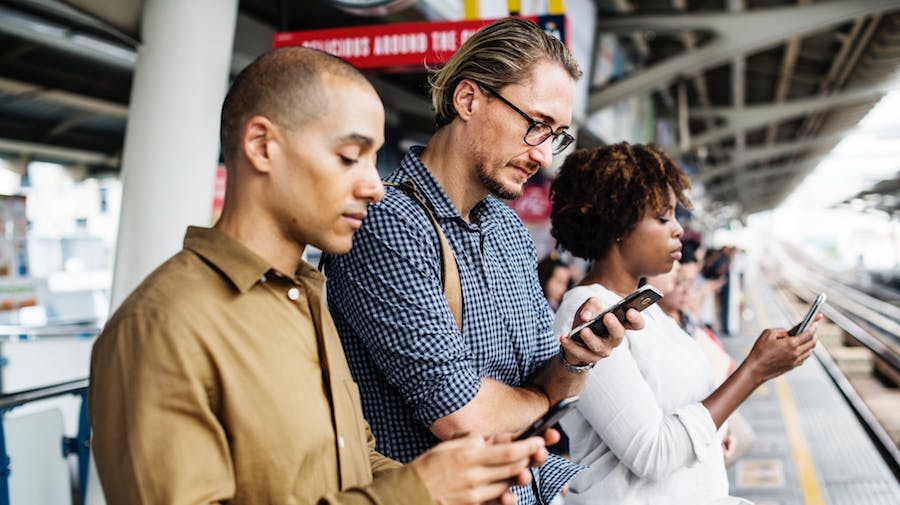 Four kids crammed on the youth room couch each looking at their own phone. A young boy is consumed with the next game of Fortnite on his mobile device. A girl scrolls through Instagram while eating at Olive Garden with her family. Is anyone noticing how addicted these kids are to their screens?

Mom and Dad are quickly developing their own set of bad habits when it comes to smartphones.

“Distracted Parenting”
That’s what Erika Christakis calls the quality of care most kids receive from their moms and dads because of the amount of time the adults spend on their smartphones. In a rather lengthy – but insightful – article for The Atlantic, Christakis outlines many of the negative implications brought into kids’ lives by their tech-obsessed parents. For example, one study she cited highlighted the vocabulary disparity between young children whose parents intentionally talked back and forth with them at a young age compared to kids whose parents did not. Unsurprisingly, the kids with verbally interactive parents had twice the vocabulary as the kids whose parents did not. (Hey, you can’t talk to your kids if you’re always answering email.) On a more dangerous front, she pointed to studies that showed an increase in ER visits for children in particular regions as smartphone adoption rose in the area. (Evidently, busy thumbs on parents’ part led to bleeding wounds on their kids’ part.)

Of course, there’s a wide gambit in between vocab and bodily harm. Distracted parents were found to more easily turn grumpy if their attention was stolen away from their phones. The more addicted parents were to their smartphones, the more likely they were to misread emotional clues…or simply miss them altogether! The phrase “continuous partial attention” certainly describes how many parents govern their homes and kids…even though it was coined years and years before the advent of smartphones.

In case you’re tempted to think it’s not as bad as Christakis makes out in her article, take it from a 2nd grade girl in Louisiana. When Jen Beason gave her class a writing assignment, one little girl wrote, “I don’t like the phone because my [parents] are on their phone every day…. I hate my mom’s phone and I wish she never had one.” Another educator, Abbey Fauntleroy, found a similar sentiment among her students. “We had a class discussion about Facebook and every single one of the students said their parents spend more time on FB than they do talking to their child. It was very eye opening for me.”

If you want to find out how that little 2nd grade girl – and her classmates – will be impacted by her parent’s constant smartphone use, look no farther than the findings released by Psychology Today that claim these kinds of kids will grow up to be more negative and less resilient.

But at least we parents will be up-to-date on sports scores and celebrity gossip….

(Re)Focusing on What Matters
Fortunately, it doesn’t have to be that way. With a simple increase in self-control, parents can resume the helm of leadership and influence in their kids’ lives. It doesn’t take much to make a huge difference. Here are a few ideas to help any parent start connecting with their kids right away.