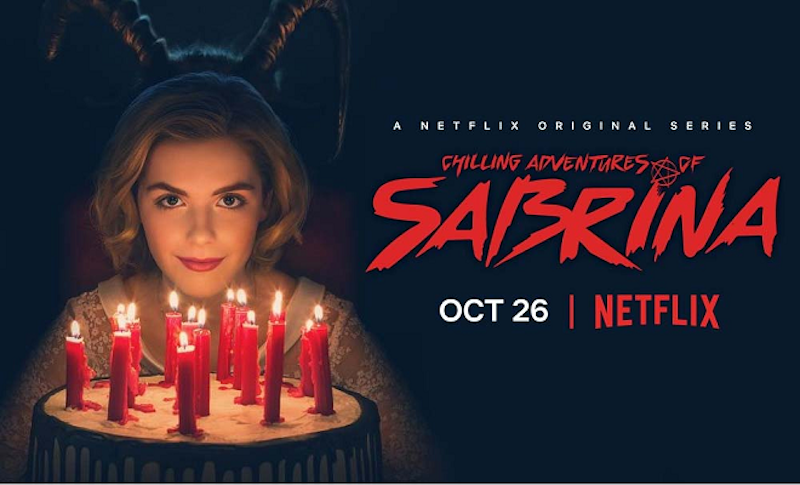 Sabrina Spellman has a choice to make. Option A is to become a witch with supernatural powers by signing her name in the Book of the Beast…though she’ll have to give up her mortal life to do so. Option B is to retain her humanity, her friends, and her significant other at Baxter High…though she’ll infuriate the Devil, himself.

The beautiful teenage girl will choose Option C: both.

Witch 2.0 — Just in time for Halloween comes Netflix’s reboot of the 90’s TV show Sabrina the Teenage Witch. But don’t expect a far-fetched sitcom about the everyday life of a teenage witch (with an accompanying laugh track). Nope, The Chilling Adventures of Sabrina are just that: chilling. The latest version definitely plays to a more mature audience. The scenes are darker, both figuratively and literally. The stakes are higher; after all, eternity is on the line. Both realities ensure that millions of teens – especially females – will be bingeing this show during the holiday season.

And why not? It’s got everything a teen drama requires these days: an intriguing premise, stellar CGI, and tons of adolescent angst (due to bullying or sexual identity or family drama or even a bitter fight against Lucifer).

But what will young viewers see as they watch the latest rendition of “puberty meets sorcery”?

A Crash Course in Satanism — Not only will young viewers see images of the goat-headed, cloven-hoofed “Dark Lord” in Sabrina, but anything remotely connected to the devil, as well.

Evidently, the show’s writing is close enough to satanical doctrine that the Satanic Temple is considering a lawsuit of appropriation against the Netflix series.

Skin…and Questions of Sexuality — Because it’s 2018, and entertainment media seems to demand it these days, there are several scenes focused on the naked body of Sabrina (played by Kiernan Shipka), and plenty examples of what defines sexual expression in our modern culture.

Young viewers will have to sift through these kinds of scenes and messages to keep up with the story of Sabrina and her friends.

Twisted Truth — Lastly, and perhaps most importantly, young viewers will be exposed to the ancient “half-truths” for which the actual Devil of the actual Bible is most known. In a tactic he first unveiled in the Garden of Eden, Satan mixes just enough truth with just enough lie to manipulate his prey.

In a stirring scene in Chapter 2: The Dark Baptism, Father Blackwood is walking Sabrina through the rites of the unholy ceremony in which she’ll sign away her life (and eternity) to Satan in exchange for a long life filled with incredible powers on Earth. It’s clear that the young girl has some reservations, so Blackwood tries to dismiss her worries by shifting the meaning of words.

Father Blackwood: (laughs) I’m glad to hear it. Neither am I. Neither are your aunts.

Sabrina: But the Devil….

Sabrina: He is the embodiment of evil.

Father Blackwood: Incorrect! He is the embodiment of free will! Good. Evil. Those words matter to the false god [his title for Jesus], but the Dark Lord is beyond such precepts!

This is just another example of the spiritual bombardment I talk about in my parenting seminar. Today’s kids are already barraged with deception and this teen-targeted show simply adds to the confusion about spiritual matters.

Cutting the CAOS — Chilling Adventures of Sabrina (which is yet another interesting acronym) has proven wildly successful in the first week of its release on Netflix…which is exactly what executives anticipated. And why shouldn’t they? Combining a beloved cast in an unusual storyline while relating the characters’ struggles to those of the real world generally assures financial gains and critical acclaim.

But do the questionable messages and unbiblical content embedded in this series outweigh the entertainment value of the show?

The answer, at least for me, is absolutely.

I’m a pastor, and I openly lament the fact that we get our theology from movies, TV shows, imported fictions from other cultures…and anyplace else besides the Bible. Millions of people are more familiar with a version of Satan from a Seth MacFarlane sitcom than the actual enemy we face who, according to Jesus, wants to kill us, steal from us, and destroy us (John 10:10). Thus, I could never endorse any form of entertainment that doesn’t tell the truth about such an important matter. It just leads to lots and lots of chaos.

The Chilling Adventures of Sabrina reminds parents and youth workers how important it is to monitor all of the content our kids are taking in. If you don’t have the 10 hours it takes to watch Season 1, just spend 20 minutes perusing online reviews of the show (or movie, or song, or book, etc). 99% of the time, this will give you all the information you need to help your family make solid decisions. Additionally, seize this opportunity to have spiritual conversations with your teenagers about the Devil that are based on the Bible. There are several great passages that give insight on his character, his attacks, and his desires: Genesis 3:1-19, Job 1 & 2, and Matthew 4:1-11.

Taking these steps will definitely help you cut out any unnecessary “caos” from your kids’ lives.