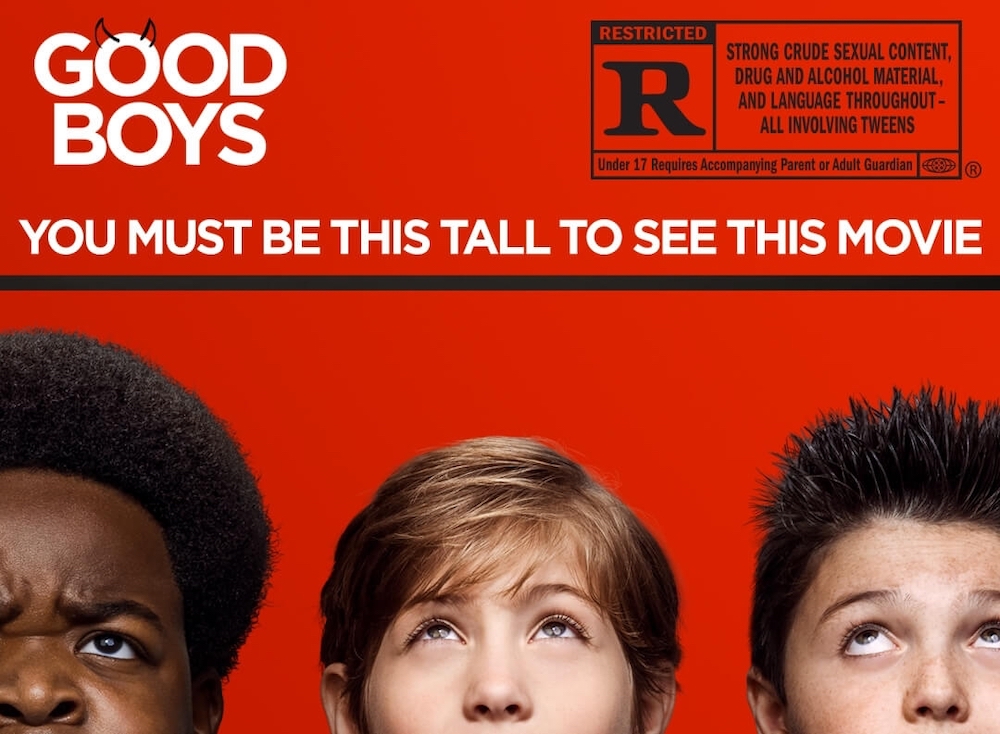 How’s that for a plot summary of Hollywood’s hottest new comedy about three kids?

A Celebration of the Loss of Innocence
On Friday, August 16th, a movie was released that blurs multiple lines of morality and sensibility.

Good Boys follows three very young boys (Stranger Things, anyone?) – Jacob Tremblay (Max), Brady Noon (Thor), and Keith L. Williams (Lucas) – as they blunder their way from one problem to another preparing for their very first “kissing party.” In case you struggle to grasp any semblance of plot from the movie’s official trailer, here’s how Universal Studios describes their latest offering:

Invited to his first kissing party, 12-year-old Max asks his best friends Lucas and Thor for some much-needed help on how to pucker up. When they hit a dead end, Max decides to use his father’s drone to spy on the teenage girls next door. When the boys lose the drone, they skip school and hatch a plan to retrieve it before Max’s dad can figure out what happened.

There are not one, but two, red band trailers promoting this movie; those who view them will be verbally and visually assaulted by obscene amounts of profanity and indecency. No exaggeration of vulgarity is required; in Good Boys, moviegoers will watch 12-year-old boys:

In advance of the movie’s release, the “Bean Bag Boys” as they’re called in the film have been making all the rounds doing promo work. When Jacob Tremblay dropped by to speak with Jimmy Fallon, the host warned his crowd, “It is rated R. I will say this, it’s rated R.” The young child boisterously offered his agreement by shouting, “Oh, it’s very rated R!”

Being that the movie is rated R, the challenge for the movie was to turn out audiences older than the movie’s very young protagonists, and it mostly did during their opening weekend.

The Bad News on Good Boys
Each spring, I write a two-part article discussing all the films being released during the summer so parents can get a preview of each movie’s appropriateness. In part two of this year’s article, I wrote the following line about Good Boys: “it should definitely be avoided…even though it stars a bunch of teens.” With the release of additional trailers and more behind-the-scenes content across the last few months, I must confess, my counsel was as helpful as saying, “It’s probably not a good idea to lick cobras.” Please allow me to adjust my original critique from a more informed position.

Even the actors’ parents bear culpability. TMZ reported that Jacob Tremblay, the movie’s central character, earned $900,000 for his role in Good Boys. The writer makes $900K sound like a ton of cash; it merely caused me to wonder what price tag I would attach to my son’s integrity. I’m not sure there are enough zeros in the world….

But is this really surprising when young actors are offered surprisingly raunchy roles?

Look, maybe those young boys don’t know any better. Fine. But if there’s not a single adult in their lives to model a standard of decency, may God help them. Sadly, this is the one part of the film that is actually a sobering reality. Most moms and dads aren’t the ones who dialogue with their kids about God’s design for sex and intimacy. Most kids turn to their peers or their screens to discover it for themselves. Any guess what answers they find there?

To what length are we willing to go to be entertained? Have our consciences been so seared that we cannot recognize depravity when we see it?

This sort of film should draw tears. Instead, it’ll draw crowds.